Does anyone know why Stroustrup's style is the placement of pointers as follows? Specifically, what Stroustrup has provided for guidance about this matter?

because declaring multiple variables would require the asterisk next to each variable name. Which would result in:

In K&R C book, they explain that the asterisk/pointer is used as a mnemonic to aid in understanding. I find it odd that the pointer/asterisk is tied to the type, vs the variable as the second of each example shows. Interested if there is some background to why the first style is chosen.

Hoping for some quote from Stroustrup in the reasoning for this.

I'm adding in K&R C 2nd Edition grammar Page 235 where the asterisk (pointer) is tied to the declarator, which is an identifier. 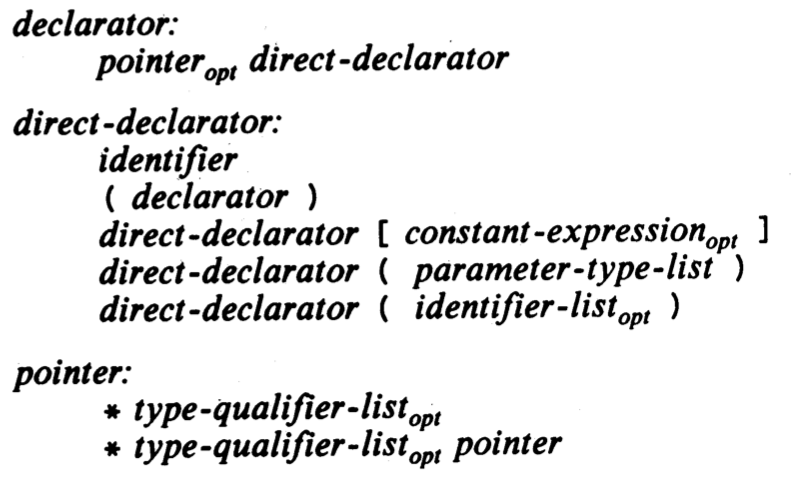 ANSWER In this article from Stroustrup on coding style. He explains that both are valid and it depends on programmer preference.

I disagree that this is an opinion based question. Stroustrup's article clearly answers the question without opinion.

C++ emphasis heavily on types and when it comes to pointers declaration, to avoid any sort of confusion, Bjarne suggested - Stick to one pointer per declaration.

Both are "right" in the sense that both are valid C and C++ and both have exactly the same meaning. As far as the language definitions and the compilers are concerned we could just as well say int*p; or int * p;

The choice between int* p; and int *p; is not about right and wrong, but about style and emphasis. C emphasized expressions; declarations were often considered little more than a necessary evil. C++, on the other hand, has a heavy emphasis on types.

A typical C programmer writes int *p; and explains it *p is what is the int emphasizing syntax, and may point to the C (and C++) declaration grammar to argue for the correctness of the style. Indeed, the * binds to the name p in the grammar.

A typical C++ programmer writes int* p; and explains it p is a pointer to an int emphasizing type. Indeed the type of p is int*. I clearly prefer that emphasis and see it as important for using the more advanced parts of C++ well.

The critical confusion comes (only) when people try to declare several pointers with a single declaration:

Placing the * closer to the name does not make this kind of error significantly less likely.

Declaring one name per declaration minimizes the problem - in particular when we initialize the variables. People are far less likely to write:

And if they do, the compiler will complain.
Whenever something can be done in two ways, someone will be confused. Whenever something is a matter of taste, discussions can drag on forever. Stick to one pointer per declaration and always initialize variables and the source of confusion disappears.

See The Design and Evolution of C++ for a longer discussion of the C declaration syntax.

I cannot speak for Bjarne, but tying the asterisk (and ampersand in case of reference) to the type makes sense because being a pointer is semantically part of the type of the variable. The name of the variable is p and its type is int*. The name is not *p and the type is not int.

It is nearly always possible to avoid multiple variable declarations in a single declaration, so that is not an issue.

In my opinion, this approach is clearer, especially in case of return types:

I believe stroustrup's style implies that variable declarations like those should be avoided. This also seems to be the general consensus among the community.

I think the answer is a couple of things.

Not the answer you're looking for? Browse other questions tagged c++ pointers coding-style conventions or ask your own question.