I followed this link and the Firebase Analytics connected and showed events, but Firebase Crashlytics is not showing any crash, it isn't even able to connect to App.

And keeps showing the following image when clicked on Crashlytics in Left panel from Firebase Console. 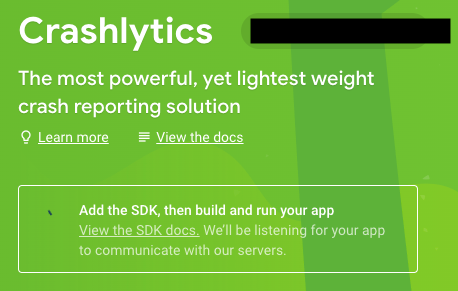 This is a fresh project Firebase Crashlytics works fine with the earlier projects created using Fabric.

I resolved this issue by Adding Run Script as shown in Firebase, also I did a fresh start.

For some reason, following the Firebase docs did not work for me as I had to do a few additional things for the "Add the SDK" loading screen to disappear on the Firebase portal and show me the crashes.

In addition to what the Firebase docs say, I did the following in addition to this answer which I have also outlined on a similar issue here

Remember to replace {PROJECT_DIR} appropriately for your project

Not the answer you're looking for? Browse other questions tagged ios crashlytics firebase-crash-reporting or ask your own question.