looping over a scipy function lots of times in cython - not seeing much improvement - should i?

I'm looking to do a ks_2samp() test on many columns in a pandas dataframe, where each column is split into the two samples i want to compare (idea being to try test for distribution changes in the columns between an initial 'baseline' period and a following 'focus' period).

I decided to try cython and just loop over the numpy arrays but after a few hours reading docs and trying to adapt some examples, i don't actually see much speed up.

Here is a google collab notebook with a reproducible example to show what i mean.

My Cython function looks like this (adapted a lot from the tutorial here):

Really i am just trying to loop over the ks_2samp() lots of times and try give Cython some types (i was, probably naively, hoping this would magically give some speedup from the research i had done).

But when i compare it to a few other approaches i've tried (all in the collab notebook) i don't see much speedup.

Here is what i mean by the timings i am seeing compared to some other approaches i made: 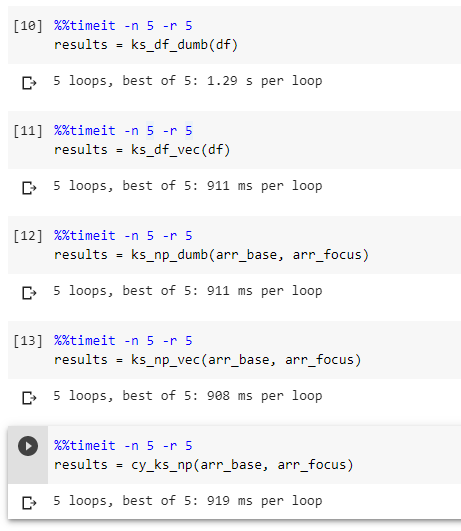 Any pointers on where i might be going wrong here or what a better approach to doing the same scipy function on all columns in a df might be?

I looked a bit at Numba but don't think that can be used on ks_2samp().