Chrome renders #FF3A00 as #FF0000 for some reason. I included a screenshot from jsfiddle to illustrate the point. The colour that the Color Meter reports (and what I see) differs from what CSS says.

This happens to other colours too. For example, #FFAF00 is rendered as #FFA400 according to the Color Meter.

However, the colours are rendered without problems on Safari and Firefox. I'm on a Mac using Chrome 11, Safari 5 and Firefox 5.

I'm sure there's a logical explanation. Any ideas?

Update: I'm attaching a screenshot of Chrome next to Safari showing the very same page. I checked this image in Photoshop: the colours are #F00 in Chrome and #FF3A00 in Safari.

Ok, as it turned out, I needed to restart my Chrome. I often connect my macbook air to a 24 inch monitor. It looks like Chrome displays the colours incorrectly when I change to a monitor that's different from what was used when Chrome was started.

I found the answer on the Google Help forum : "I should mention that in OS X, every time you change your monitor or monitor profile (e.g. if you switch from your laptop display to your external display), you MUST restart Chrome for it to get the proper monitor profile information from the OS."

By default both Firefox and Safari use the sRGB color profile. You must do the same, if your Google Chrome takes a different color profile as default.

As Andrew Marshall answered there, this is a known issue: http://code.google.com/p/chromium/issues/detail?id=44872

Color on computers. Something many of us take for granted but never bothered to understand how it is rendered.

Go to chrome://flags/#force-color-profile and click Reset all to default

I changed the Colour Profile in OS X and that sorted it for me. 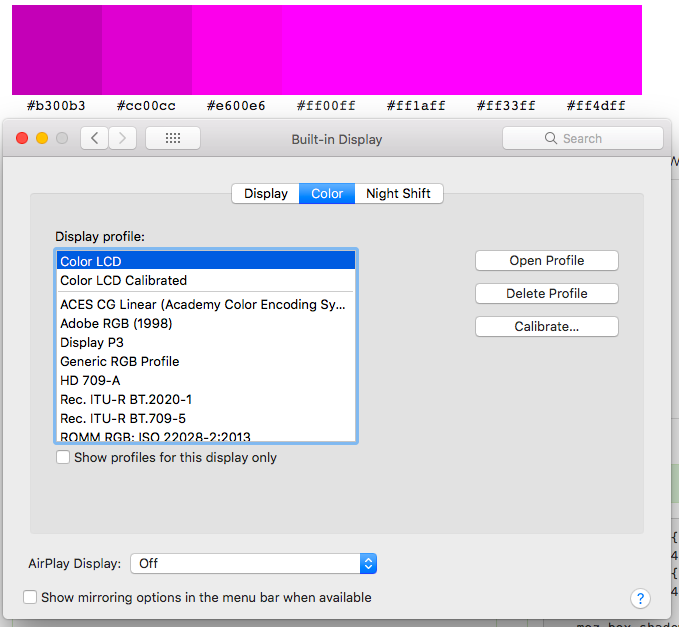 With a different colour profile: 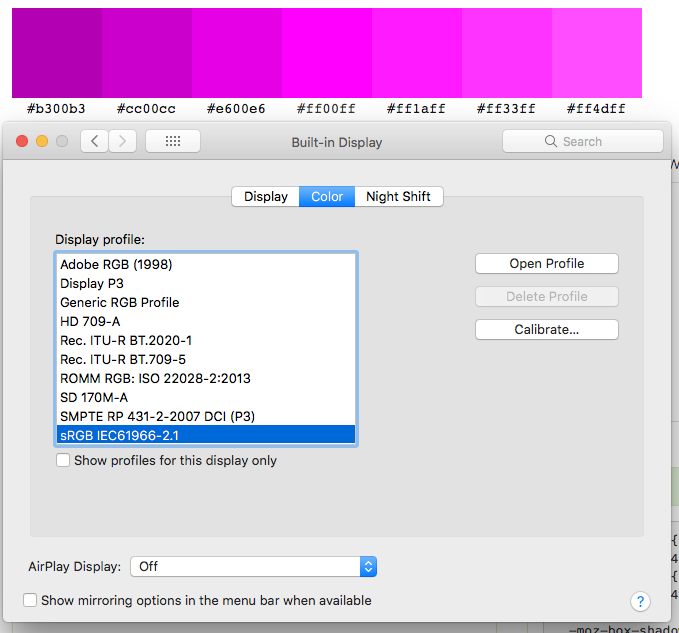 From: CSS colors on OS X displaying correctly in Firefox but incorrectly in Safari and Chrome (potentially 'solved')

I found Safari and Chrome could not differentiate between #ff00ff, #ff1aff, #ff33ff and #ff4dff. But Firefox could. In addition Inkscape, an X11 app, could. But Gimp and Libreoffice Writer, non X11 apps, could not. Firefox and X11 apps seem to be using their own colour profile somehow.

I have no idea why Mac defaults to Color LCD profile which does not do this differentiation amongst others.

In case someone else come here because firefox images looks too colorful (over saturated). Full guide on how to fix it https://cameratico.com/color-management/firefox/

Now Firefox will display colors same as Safari, Chrome and all other browsers

Had this problem with Chrome (Lubuntu) when exporting a PNG in Photoshop. Solution: File -> Save As -> Uncheck "ICC Profile: Adobe RGB (1998)".

Not the answer you're looking for? Browse other questions tagged css google-chrome colors rendering or ask your own question.

2
CSS: Why Color code #999 shades are different in Chrome and Firefox?
3
why is grey displayed differently on different browsers?
3
CSS colors on OS X displaying incorrectly in Safari and Chrome but correctly in Firefox (potentially 'solved')
3
How to get correct adjusted CSS Color code of chrome rendered color?
1
CSS color difference between Browsers
0
svg color "wrong" in chrome with color profile "default" on some screens
0
Color difference between browsers (Chromium, Chrome, Firefox) with example

1287
How to manually send HTTP POST requests from Firefox or Chrome browser
13
Why does Safari render CSS multi-column layout differently?
2
Chrome rendering color incorrectly, but not Safari or Firefox
910
Remove blue border from css custom-styled button in Chrome
1
Color rendering differents in Firefox and Chrome
13
:not() selector not behaving the same between Safari and Chrome/Firefox
4
CSS line-height renders differently on safari
7
Video renders slightly brighter in Safari and Chrome than in Firefox
1
Chrome and Safari on MacOS display wrong colors. Firefox works