I have two large numpy arrays of randomly sorted 2d points, let's say they're A and B. What I need to do is find the number of "matches" between the two arrays, where a match is a point in A (call it A') being within some given radius R with a point in B (call it B'). This means that every point in A must match with either 1 or no points in B. It would also be nice to return the list indices of the matches between the two arrays, however this isn't necessary. Since there can be many points in this radius R, it seems better to find the point which is closest to A' in B, and then checking if it's within the radius R. This is tested simply with the distance formula dx^2 + dy^2. Obviously there's the brute force O(n^2) solution of looping through both arrays, but I need something faster, hopefully O(n log n).

What I've seen is that a Voronoi diagram can be used for a problem like this, however I'm not sure how this would be implemented. I'm unfamiliar with Voronoi diagrams, so I'm generating it with scipy.spatial.Voronoi. Is there a fast algorithm for this problem by using these diagrams or is there another?

I think there are several options. I ginned up a small comparison test to explore a few. The first couple of these only go as far as finding how many points are mutually within radius of each other to make sure I was getting consistent results on the main part of the problem. It does not answer the mail on the part of your problem about finding the closest, which I think would be just a bit more work on a few of them--did it for the last option, see bottom of post. The driver of the problem is doing all of the comparisons, and I think you can make some hay by some sorting (last notion here) to limit comparisons.

Works great & fastest for "small" data. With large data, this starts to blow up because of size of matrix output in memory. Probably infeasible for 1M x 1M application.

From other solution. Fast, but not as fast as cdist or "sectioning" (below). Perhaps there is a different way to employ KDTree for this task... I'm not very experienced with it. This approach (below) seemed logical.

This works very well because you are not interested in all of the distances, you just want ones that are within a radius. So, by sorting the target array and only looking within a rectangular window around it for "contenders" you can get very fast performance w/ native python and no "memory explosion." Probably still a bit "left on the table" here for enhancement maybe by embedding cdist within this implementation or (gulp) trying to multithread it.

This is a tight "mathy" loop so trying something in cython or splitting up one of the arrays and multi-threading it would be novel. And pickling the result so you don't have to run this often seems prudent.

I think any of these you could augment the tuples with the index within the array pretty easily to get a list of the matches.

Results for one of the sizes and plots: 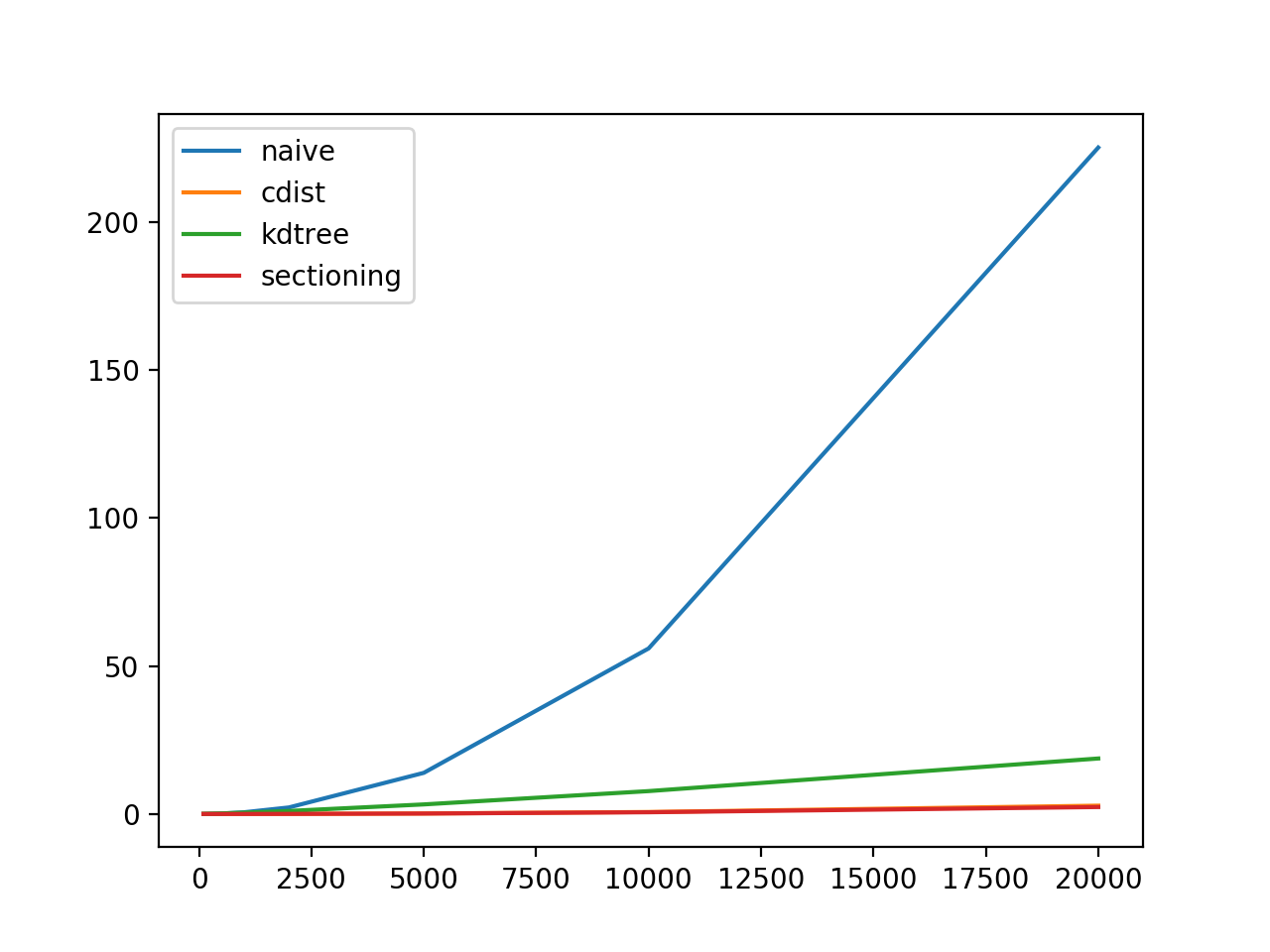 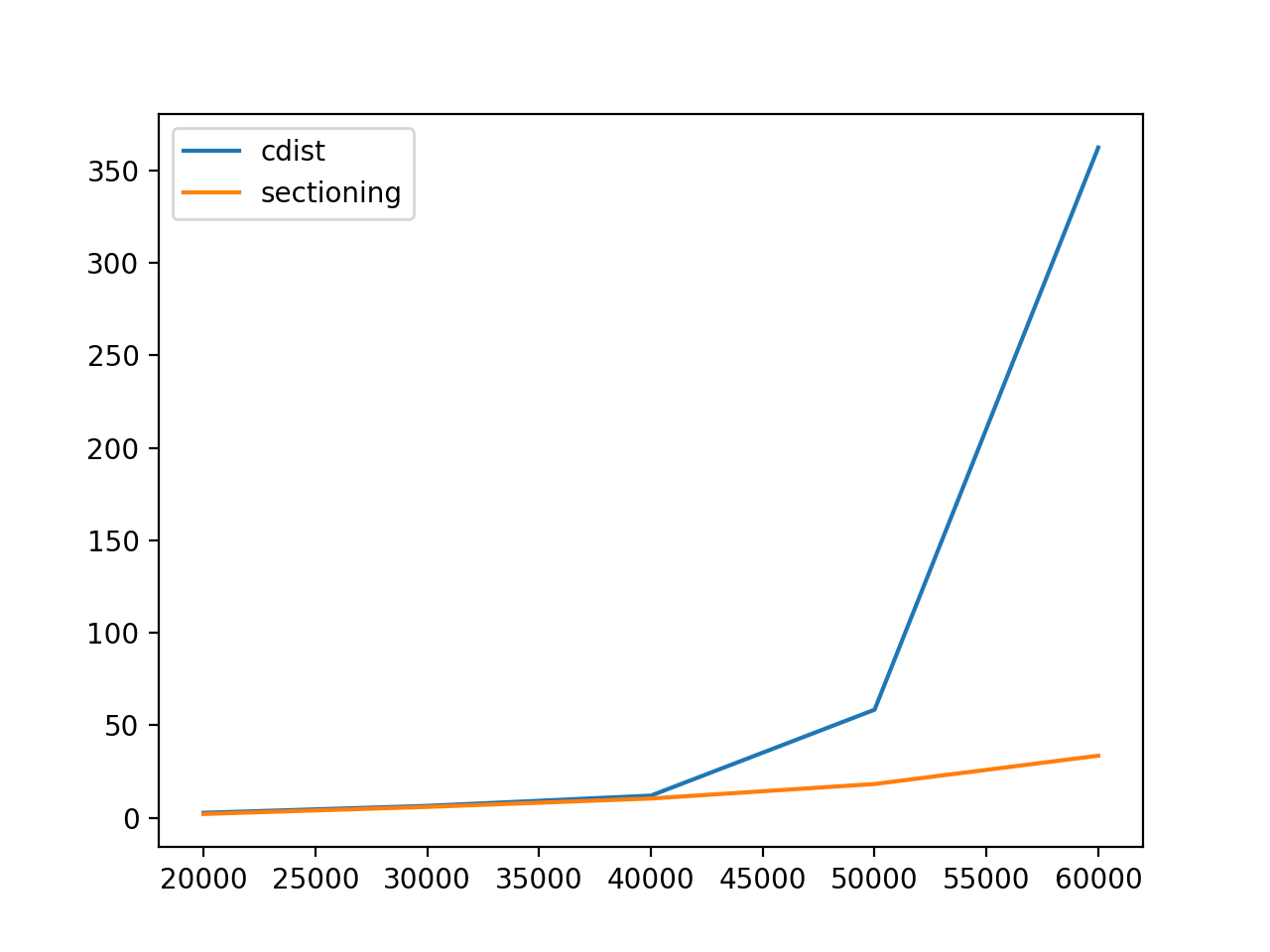 This code finds the minimum within the points within radius. Runtime is equivalent to the sectioning code above.

What you probably want is KDTrees (which are slow in high dimensions, but should be blazingly fast for your problem. The python implementation even implements the radius bound.

Not the answer you're looking for? Browse other questions tagged python algorithm 2d or ask your own question.

1
How to find nearest points between two contours in OpenCV
1
Why is Scipy.spatial.distance.cdist fast if it uses a double for loop?

560
What algorithms compute directions from point A to point B on a map?
69
Millions of 3D points: How to find the 10 of them closest to a given point?
834
How to sort a list/tuple of lists/tuples by the element at a given index?
1237
Easy interview question got harder: given numbers 1..100, find the missing number(s) given exactly k are missing
420
How can I find all matches to a regular expression in Python?
1419
Creating a singleton in Python
1181
Ukkonen's suffix tree algorithm in plain English
1820
Image Processing: Algorithm Improvement for 'Coca-Cola Can' Recognition
1
Find two closest points in 2D distribution