So I have this code currently in my AppDelegate:

Where should I put this code now?

Here is a solution for SwiftUI life-cycle. Tested with Xcode 12b / iOS 14

Overriding the initializer in your App also works:

You should not put that kind of codes in the app delegate at all or you will end up facing the Massive App Delegate. Instead, you should consider refactoring your code to more meaningful pieces and then put the right part in the right place. For this case, the only thing you need is to be sure that the code is executing those functions once the app is ready and only once. So the init method could be great:

You can have your own custom class and assign it as the delegate. But note that it will not work for events that happen before assignment. For example:

Most of AppDelegate methods are actually observing on notifications that you can observe manually instead of defining a new class. For example:

You can directly inject app delegate into the @main struct:

Remember that adding AppDelegate means that you are killing default multiplatform support and you have to check for platform manually.

You can also use the new ScenePhase for certain code that the AppDelegate and SceneDelegate had. Like going to the background or becoming active. From

Note the method below will stop cross platform support so should only be used if you are planning on building for iOS only.

You can still have an AppDelegate and a SceneDelegate when you create a SwiftUI app in Xcode 12-beta.

You just need to make sure that you have chosen the correct option for the Life Cycle when you create your app. 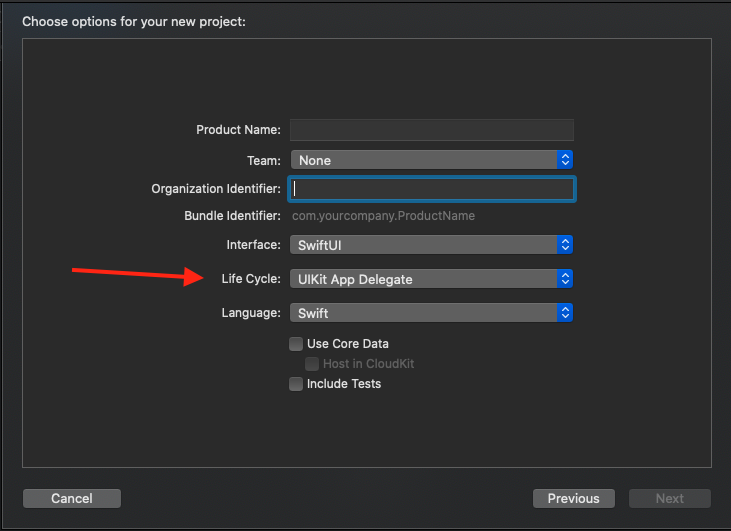 Instead, we can create a block to notify us when didFinishLaunching gets called. This allows to keep more code in SwiftUI world (rather than in AppDelegate).

Not the answer you're looking for? Browse other questions tagged ios firebase swiftui ios14 xcode12 or ask your own question.

4
Close SwiftUI application when last window is closed
47
Getting local notifications to show while app is in foreground Swift 3
87
Difference between SceneDelegate and AppDelegate
29
Where to configure Firebase in my iOS app in the new SwiftUI App life cycle without AppDelegate and SceneDelegate?
4
SwiftUI swizzling disabled by default, phone auth not working
5
Get local notification when App is in foreground Swift 4 iOS 11
5
When to use SwiftUI Interface with UIKit Life Cycle?
2
How do you migrate to the new SwiftUI App Protocol?
3
Using BGTaskScheduler API with new iOS 14 App. How to register tasks without an AppDelegate?
3
@UIApplicationMain may only be used on 'class' declarations error when using SwiftUI App Lifecycle on Mac
See more linked questions

0
How to hide the app status bar
0
How to migrate multiple realm files in one App
2
Error: `call FirebaseApp.configure() before using Firestore`
0
Geofence not working while app is in background ios
11
Xcode 11: cannot instantiate view controller from storyboard with identifier