Return the rows which sum of qty column is bigger than

The table1 is a simple version of the source table but for example its enough. My point is to return all rows with locator and lot where the given partnumber(H28650-D3830-EX) matches and the given sum qty(62) is eligible for that order.

Unfortunately the query does not return anything. Can someone help me with that issue, I want to know the logic behind it. 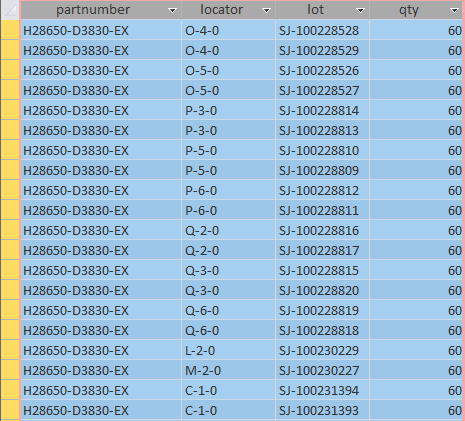 Thanks to people who will try to help me :)

Browse other questions tagged mysql sql having or ask your own question.

433
MySQL Error 1153 - Got a packet bigger than 'max_allowed_packet' bytes
580
Fetch the row which has the Max value for a column
1048
How do I limit the number of rows returned by an Oracle query after ordering?
782
How can I SELECT rows with MAX(Column value), DISTINCT by another column in SQL?
4
SQL Left Join doubling value of summed columns
1
Returning a SUM from DISTINCT columns in Microsoft SQL
0
How to sum the values in a one row by grouping from multiples rows
0
How to group consecutive rows together in SQL by multiple columns