Do I ever need to explicitly flush GORM save calls in grails?

I cannot understand why the last two queries could return different results.

However if I make the following modification of book.save(flush:true). Both of the println statements will return all books.

I was under the impression that this was not necessary within a single application.

My problem is demonstrated below, suppose action1/action2 are both called many many times, in no particular pattern

One solution would be to have a flag which is is set by action1 and used by action2 to flush if necessary. My issue is that this is an overly complex solution, which is not scalable as the complexity of DB calls increases.

Do I ever need to explicitly flush GORM save calls in grails?

In short Yes!, if you want to use the object immediately as you are doing in your code.

I faced same problem, so this is the picture I got after reading some refs.

This is hibernate session issue.
Hibernate session is created when controller action is called and ends when the action returns ( or dies with error early). If a code is not calling any transactional code Hibernate's db interaction can be depicted like this:
Assume the entry action name is actionName and call to the action completes without any error.

NB:The middle bar ( 2nd level cache is disabled) because there is no any transactional code. 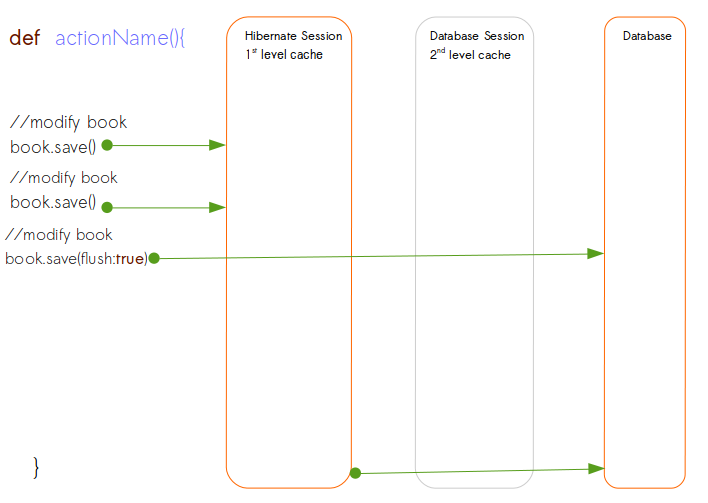 if the above same code has error: 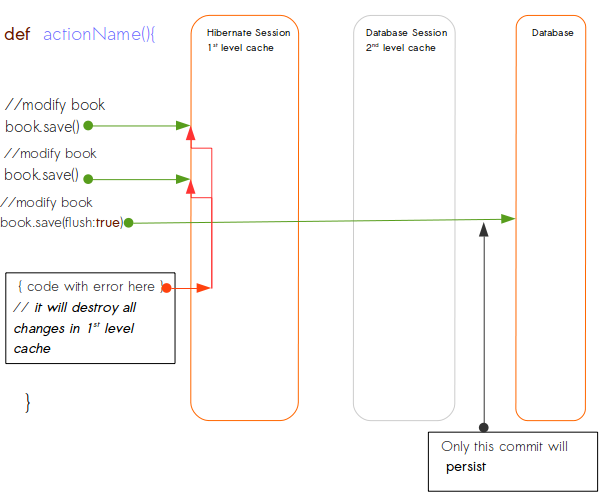 But if your action is calling transactional method or is creating inline transaction with withTransaction ( and assume the call to the action completed without any error). 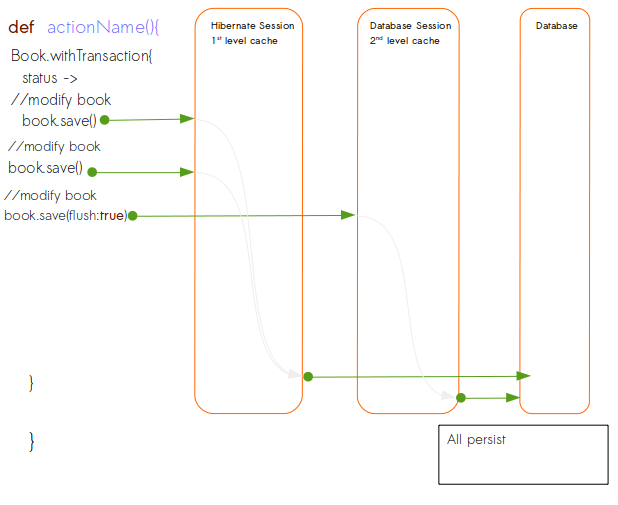 If the above code has an error: 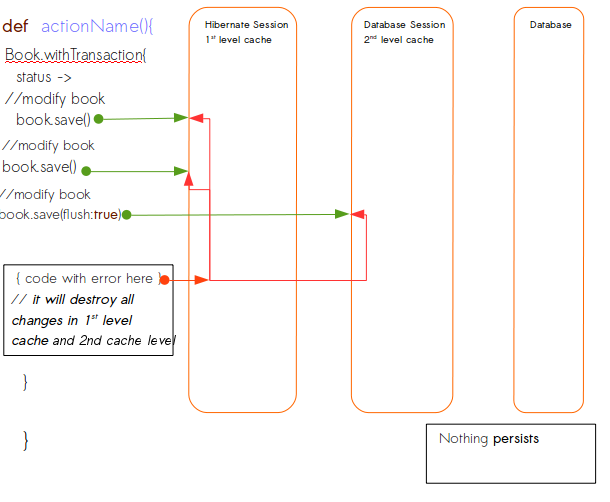 I hope it helps, but if I made any error or missed to include big point , comment me I will update my pics.

In your case, the first statement return empty list because it reads data from the database, but the data isn't there yet.

Generally, you should let Hibernate do the work for you (for optimization sake) - unless you want the data are persisted right away.

According to Peter Ledbrook:

Let Hibernate do it's job and only manually flush the session when you have to, or at least only at the end of a batch of updates. You should only really use if you're not seeing the data in the database when it should be there. I know that's a bit wishy-washy, but the circumstances when such action is necessary depend on the database implementation and other factors.

UPDATE: to be clear about how to flush the session one time after all the object get saved:

I wonder what was your FlushMode setting.

By default it is set to "auto" and it means that session is flushed before every query which hits DB directly (and probably in other cases too). In that case your Foo.findAllByBar should flush the session first (possible performance issue!) and read correct value from the DB.

There are two other values for FlushMode and if you set one of them then it would explain your problems. First is "manual" which means you decide to manual flush session (e.g. with save(flush:true)). If you don't do that then Foo.findAllByBar reads outdated DB state. Second one is "commit" which means that session is flushed with every transaction commit. That is quite handy if you use "withTransaction" statement in grails.

For added info, you can't use flush or save(flush:true) in your domain class events (afterUpdate, beforeUpdate, ect) It will cause a stack overflow error. You can use save() without flush though.

Not the answer you're looking for? Browse other questions tagged grails grails-orm object-persistence or ask your own question.

3
Grails Transactions and the Session
1
Is it ever necessary to flush in a service?
0
Grails unique validation exception with two consecutive saves
0
Flush session in controller, after I saved
0
Grails possible race condition in database session?