What exactly is a Cadence decision task?

Activity tasks are pretty easy to understand since it's executing an activity...but what is a decision task? Does the worker run through the workflow from beginning (using records of completed activities) until it hits the next "meaningful" thing it needs to do while making a "decision" on what needs to be done next?

Decision is short for workflow decision.

A decision task is a task for worker to execute workflow code to generate decision.

NOTE: in Temporal, decision is called "command", the workflow decision task is called "workflow task" which generates the "command"

Fortunately, using iWF will keep you away from leakage. iWF provides a nice abstraction on top of Cadence/Temporal but keep the same power.

Let say we have this workflow code:

From Cadence/Temporal SDK's point of view, the code is a state machine.

Assuming we have an execution that the result of activityA is xyz, so that the execution will go to the sleep branch.

Then the workflow execution flow is like this graph. 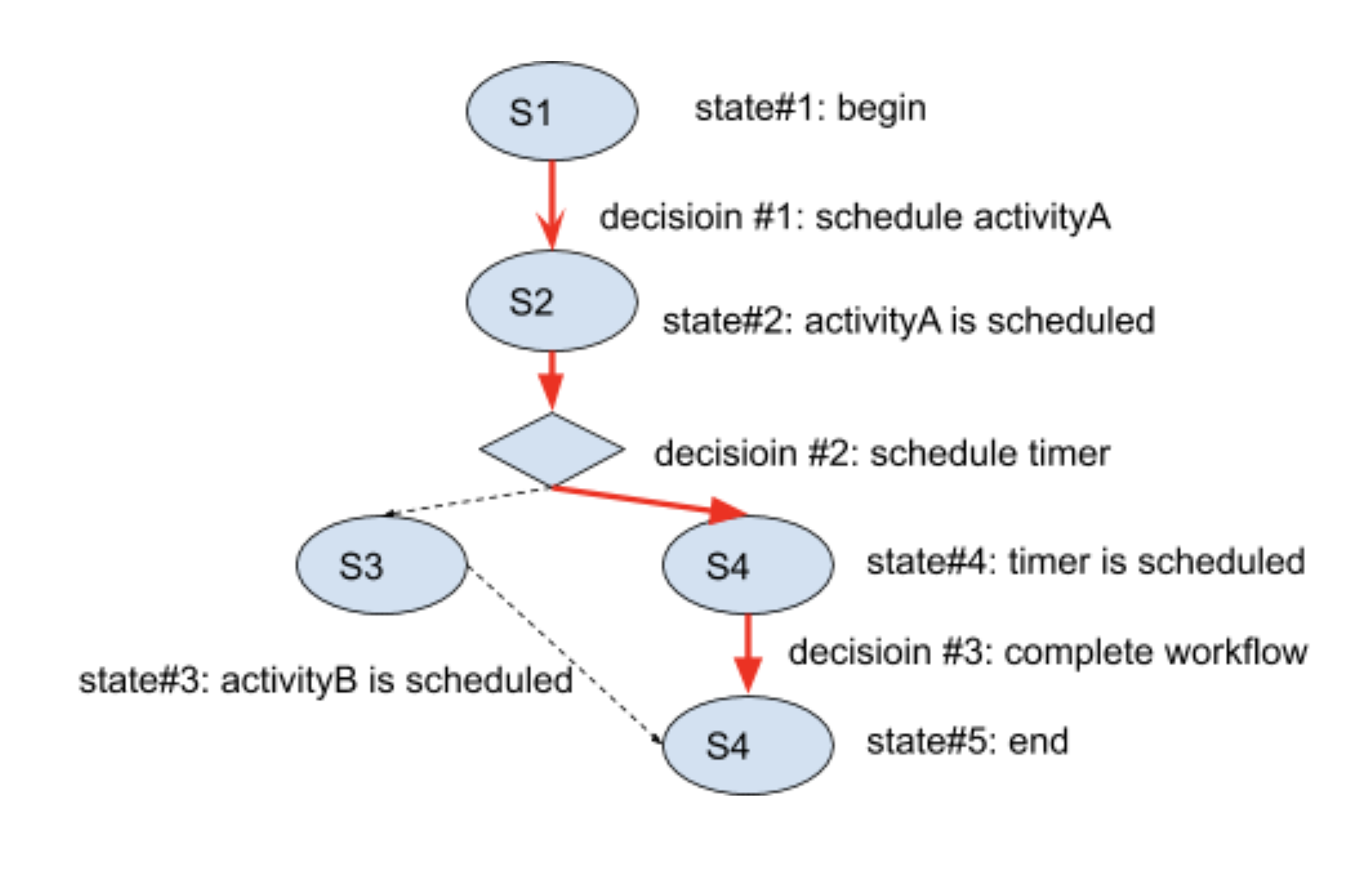 Timeline in the example

What happens during the above workflow execution:

Some more facts about decision

History events of the example:

TLDR; When a new external event is received a workflow task is responsible for determining which next commands to execute.

Temporal/Cadence workflows are executed by an external worker. So the only way to learn about which next steps a workflow has to take is to ask it every time new information is available. The only way to dispatch such a request to a worker is to put into a workflow task into a task queue. The workflow worker picks it up, gets workflow out of its cache, and applies new events to it. After the new events are applied the workflow executes producing a new set of commands. After the workflow code is blocked and cannot make any forward progress the workflow task is reported as completed back to the service. The list of commands to execute is included in the completion request.

Does the worker run through the workflow from beginning (using records of completed activities) until it hits the next "meaningful" thing it needs to do while making a "decision" on what needs to be done next?

This depends if a worker has the workflow object in its LRU cache. If workflow is in the cache, no recovery is needed and only new events are included in the workflow task. If object is not cached then the whole event history is shipped and the worker has to execute the workflow code from the beginning to get it to its current state. All commands produced while replaying past events are duplicates of previously produced commands and are ignored.

The above means that during a lifetime of a workflow multiple workflow tasks have to be executed. For example for a workflow that calls two activities in a sequence:

The tasks will be executed for every state transition:

In the answer, I used terminology adopted by temporal.io fork of Cadence. Here is how the Cadence concepts map to the Temporal ones:

0
How to return the processing result of a signal?
0
How to pass workflow.Context to the Cadence activity
0
How does history replay works in cadence?
0
"QueryFailedError{Message: workflow must handle at least one decision task before it can be queried}" when trying to run a workflow