I want to make my own library for ARM Cortex-M3 enabled devices. Currently writing to a register looks like this:

So I wish to abstract peripherals into struct so it's a lot more user-friendly, readable, and allows for autocompletion inside the IDE. The previous example would then look like so:

I can't use volatile on struct or on its members, otherwise (to my knowledge) that'd always include the struct in the final code even if its not actually being used for anything in the code. I also noticed that even if the struct is name-less and all its members have been initialised as const values, the compiler makes a constructor for it and stores it in RAM instead of the FLASH which is really suboptimal.

Optimally I'd also want the struct approach to generate assembly code like this (disassembly of first example):

Instead of code like this that's reading struct variables from RAM (my approach using volatile members inside a struct):

How could I implement this while not compromising for program size or performance? 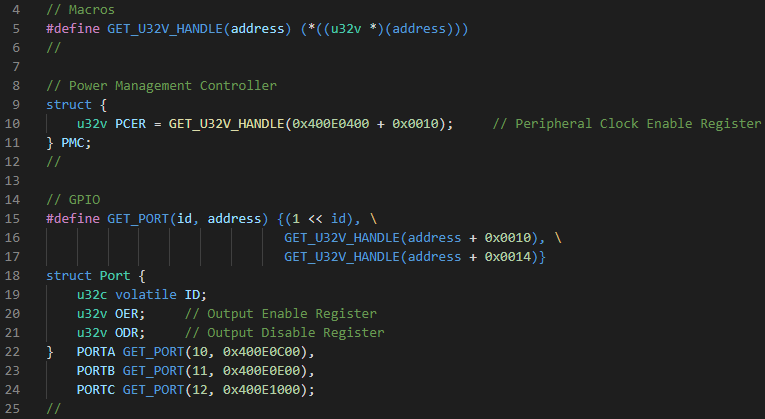 So I wish to abstract peripherals into struct so it's a lot more user-friendly ...

Many "MCAL" packets (hardware abstraction used in the automotive industry) do it like this. Example:

... so you can access the peripheral registers the following way:

I have also seen that such a structure has been declared as variable:

... and the "variable" was defined at a fixed address (0x80001000 in the example) by using compiler-specific keywords, hand-written assembly code or special instructions in the linker configuration file.

I can't use volatile ... on its members

There seem to be compilers that don't even allow volatile for members but only for the entire struct.

... the compiler makes a constructor for it and stores it in RAM instead of the FLASH which is really suboptimal.

The way you are using these structs look a bit strange to me.

I just tried the following code with the GCC tool chain (C, not C++) for ARM and optimization switched on:

The result (here the object file):

No initialization code, constructors or similar were generated.

As already written, either some hand-written assembly code some information in the linker script would be neccessary to define the address of the pseudo-variable "PMC" as 0x400E0400.

I tried both approaches (assembly and linker script): The result was exactly the same as with the #define approach.

I also compiled the code with the C++ compiler instead of the C compiler: The resulting code is the same.

I'm not sure why I didn't think about this before, but volatile inside a function is only read by the compiler when you use that function. So I just made a struct using operator=(int) and operator int() overloads.

When using optimisation flags the compiler discards everything that the user doesn't use, which is exactly what I needed.

Not the answer you're looking for? Browse other questions tagged c++ assembly struct arm or ask your own question.

594
C-like structures in Python
1570
Replacing a 32-bit loop counter with 64-bit introduces crazy performance deviations with _mm_popcnt_u64 on Intel CPUs
0
Register mapping in a ARM based SoC
269
How to affect Delphi XEx code generation for Android/ARM targets?
36
How to create a QEMU ARM machine with custom peripherals and memory maps?
0
How does a compiler/assembler make sense of processor core registers?
0
Arm assembler issue with automatic register switch
2
ARM Cortex-M3 boot from RAM initial state
1
Reference to a C pointer from Assembler