How can I fix "unexpected element <queries> found in <manifest>" error?

All of a sudden, I am getting this build error in my Android project:

The Android Gradle Plugin needs to know about new manifest elements, particularly for the manifest merger process. The plugin has a tendency to get confused if it sees elements in the manifest merger that it does not recognize, tossing out build errors like the one in the question.

In this case, Android 11 introduced <queries> as a manifest element, and older versions of the Android Gradle Plugin do not know about that element.

The fact that this occurs from manifest merger means that simply upgrading a dependency might bring about this error. For example, if you upgrade to the latest version of com.awesome:awesome-library, and it contained a <queries> element in its manifest, you might crash with the aforementioned error in your builds, even without any other changes in your code.

Google released a series of patch versions of the Android Gradle Plugin to address this:

If you are using an existing plugin in the 3.3.* through 4.0.* series, upgrade to the associated patch version (or higher) from that list, and you should no longer run into that error (e.g., classpath 'com.android.tools.build:gradle:4.0.1').

If you are using Android Studio 4.1 or higher, with a matching Android Gradle Plugin (e.g., in the 4.1.* series), you should be fine without any changes. Those plugin versions were already aware of <queries>.

I had this issue in Flutter, but I believe this solution will work for both Flutter and native Flutter development.

I also suddenly had the same issue two days ago in Android Studio 4.1.1. I solved the issue by upgrading the build Gradle version.

Previous setting in the build.gradle file of the project was:

The issue was gone immediately. :)

Fixing the error is very simple. Update your Android Studio to the last version and use the last stable Gradle plugin version. At the current time, I use Android Studio version 4.1.3 with Gradle Plugin 6.8.2

For more information, see the photo below: 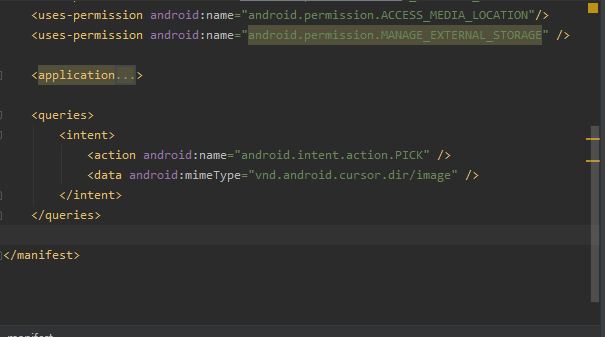 I had this error in the react-native-image-crop-picker library, and I solved this problem by updating the Gradle version as mentioned in previous answers.

Then it worked OK.

Due to the new default settings and features for package visibility in Android 11 that need to add <queries>, you must update your Android Gradle plugin.

If you want to use a newer version of Android Gradle, you should search for a compatible wrapper from Android Gradle plugin release notes, Update Gradle.

Update your Gradle version to 4.0.1 or later.

You can see the distribution chart at How to update gradle in android studio?

2826
How can I save an activity state using the save instance state?
1977
"Debug certificate expired" error in Eclipse Android plugins
1502
How can you get the build/version number of your Android application?
2659
How can I fix 'android.os.NetworkOnMainThreadException'?
1068
Android Studio: Add jar as library?
1172
You need to use a Theme.AppCompat theme (or descendant) with this activity
803
Error retrieving parent for item: No resource found that matches the given name after upgrading to AppCompat v23
1559
Android 8: Cleartext HTTP traffic not permitted
640
Invoke-customs are only supported starting with android 0 --min-api 26