Force load an assembly from the /bin and not the GAC?

I have two assemblies, created through conditional compilation (dev and real).

The public surface of these assemblies is 100% identical: both are strongly named; both are signed with the same .snk and therefore have the same PublicKeyToken; both have the same culture and the same version. I cannot change this: making them appear identical is the whole point.

Is there a way to force a specific ASP.NET application to use the dev one (which is in /bin), given that:

I noticed that someone already asked this in #991293, but the accepted answer involved removing the signing, which isn't an option here.

Am I out of luck?

GAC is always tried first, when binding assemblies: How the Runtime Locates Assemblies

So no, you can't do this. However if you explain why you have such strange requirements there might be a different work around, you have not thought of.

No there is no way to do this. When loading an assembly the CLR will check to see if a DLL with an equivalent strong name is present in the GAC. If there is a matching assembly in the GAC it will pick the GAC assembly every time. There is unfortunately no way to override this behavior.

It is possible, but it is advanced and require your knownledge on CLR and how it works and C++.

I found another way. It is only meant for developers, but it works. According to https://msdn.microsoft.com/en-us/library/cskzh7h6(v=vs.100).aspx you set this in the your .config file

You also need to set the Environment variable DEVPATH with to the path of your dll. Open a cmd, set the variable, run your app:

This helped me to load a local Oracle.ManagedDataAccess.dll since Oracle releases new versions, but they all have the same Version and PublicKeyToken. Thanks Oracle!

You can use Process Explorer from Microsoft to see the difference. See https://technet.microsoft.com/en-us/sysinternals/ See this as a small proof of concept: 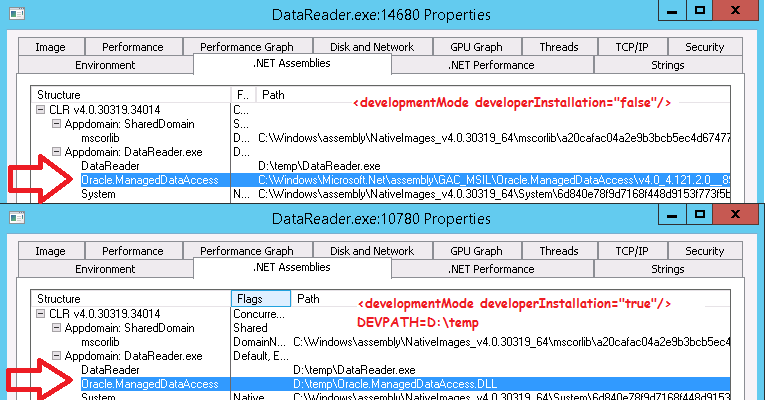 You'd have to do something like manually loading the assembly from the file (Assembly.LoadFrom, or Assembly.Load(byte[]) ) before it is loaded from the GAC, and then handle the AppDomain.AssemblyResolve event. Check out Suzanne Cook's blog post for more details.

19
Forcing the ASP.NET Application to load the assembly from bin not from GAC
1
Where assemblies are loaded from?

7415
What is the difference between String and string in C#?
846
How can I get the assembly file version
19
Forcing the ASP.NET Application to load the assembly from bin not from GAC
41
How to prevent a .NET application from loading/referencing an assembly from the GAC?
70
Gacutil.exe successfully adds assembly, but assembly not viewable in explorer. Why?
318
Could not load file or assembly or one of its dependencies
1673
Why not inherit from List<T>?
1226
Could not find a part of the path ... bin\roslyn\csc.exe
268
You must add a reference to assembly 'netstandard, Version=2.0.0.0