Why do some views appear as a red no entry sign in widgets?

I've created a project in xcode 12 and added a Widget Extension target. The target is created and I'm left with a simple widget that shows the time. The preview of the widget works as expected and the widget is shown as expected in the simulator. But if I change the view to use List instead of Text, like this:

The preview and the simulator both show a red No Entry sign on a yellow background: 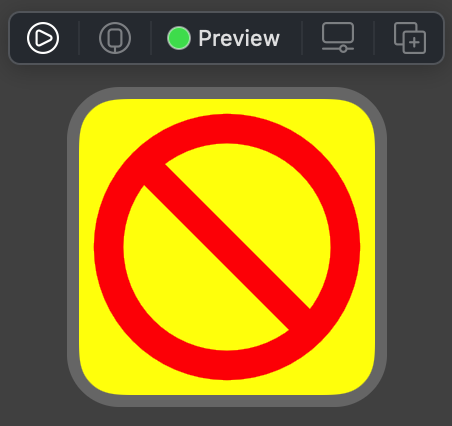 I've tried putting the List inside a VStack and using a dynamic list without any success. I can't find any documentation about List being prohibited in a widget. I've tried restarting xcode and the simulator, cleaning and rebuilding. I'm using xcode 12.0 beta 3.

~I also get this issue trying to use a UIView wrapped in UIViewRepresentable. The view is a LineChartView from the Charts library.~ Edit: according to this post on the Apple developer forums it isn't possible to use UIKit views in a WidgetKit widget.

Does anyone know how I can use a List in a widget? Any help much appreciated. Thanks

They don't support animation, navigation nor user interaction (with the exception of Link). And they must be written in pure SwiftUI.

List of views that are not allowed in WidgetKit

Note that the list is not exhaustive, provided mostly with examples:

If you want to use any of the above views, e.g. an interactive view like List, you need to create it out of non-interactive views - here VStack + ForEach.

I got this yellow no entry (ghostbusters without the ghost lol) sign after trying to include a chart from the Charts library (subclass of UIView) using a UIViewRepresentable wrapper. I couldn't find the yellow no entry sign documented anywhere and wasn't sure if it originated from the Charts library or iOS itself so it was a relief to see that you saw the same issue and this set me on the right path to coming up with a solution.

From this post that you referenced above, an Apple Engineer says "UIKit views wrapped in UIViewRepresentable will not work in WidgetKit. When the views are encoded from your extension to be displayed they will appear blank.". I don't think that is entirely accurate. I think it will appear yellow with a red "no entry" sign.

I got around this issue by rendering my chart as a UIImage and displaying the image on the widget instead of the UIView version of the chart. That should suffice for my purposes as I don't need it to be interactive like I do in the app.

Use ForEach inside a VStack:

17
iOS 14 Widgets: Widget not rendering when list is used
4
How to prevent iOS 14 Widget opening app and react to callback
2
Widget without using SwiftUI
0
How to add map to a iOS 14 widget?

61
iOS Playground doesn't show UI preview
104
Xcode Error on Simulator: MGIsDeviceOneOfType is not supported on this platform
15
SwiftUI View not updating its state when embedded in UIView (using UIHostingController)
3
How to ensure WidgetKit view shows correct results from @FetchRequest?
0
How to display data from Core Data in WidgetKit
10
iOS 14 widget works locally, but fails via TestFlight
1
CGAffineTransform scale resize not working properly when used in SwiftUI