EF Core 3 issues with .Include() when using .AsExpandable()

I have a common EntityDbContext subclass which I use in any consuming project without further extension to suit the domain of the application, rather I provide interfaces, IReadEntities and IWriteEntities which have methods like Query() and Get() which behind the scenes call Set() returning the DbSet() then allowing the standard LINQ expressions to be chained on as for any EF query. I'm facing issues around using Include() on my IQueryables as I'm using LinqKit with AsExpandable() at the end of all my calls. This is what my context Query methods look like

This scenario works fine if I wanted to pull address details from a related table as I use projection on the database serve given I'm using the Select prior to execution. There are scenarios though where it makes sense to pull an object graph back and specify Include(...) statements but as it stands specifying _db.Query<Customer>().Include(c => c.Address) doesn't hydrate the Address navigation property. I've tried leaving the AsExpandable() off and then the results come back.

The question is, does anyone see a way to allow the Include statements to be provided maybe as a parameter to the method and then I loop through them and tack them on before calling AsExpandable()? I can't quite get my head around how to do it, if it's possible.

Interestingly this apparently works fine on a version of this pattern a colleague uses where they are using EF 6. He says they specify Include after the AsExpandable without a problem.

This is known issue with EF Core and LinqKit AsExpandable (and in general with any extension library which uses custom IQueryProvider to perform its query expression tree preprocessing like LinqKit), because EF Core ignores all EF Core specific IQueryable extensions (Include / ThenInclude, AsNoTracking etc.) it the query provider is different (or does not inherit) the EF Core one (EF6 has no such requirements).

With that being said, currently there is no other solution than applying all EF Core specific extensions before calling AsExpandable.

Ok this works. I created an overload:

From my handler I create a list of include expressions and pass to the Query:

Execution of the query has the navigation property populated: 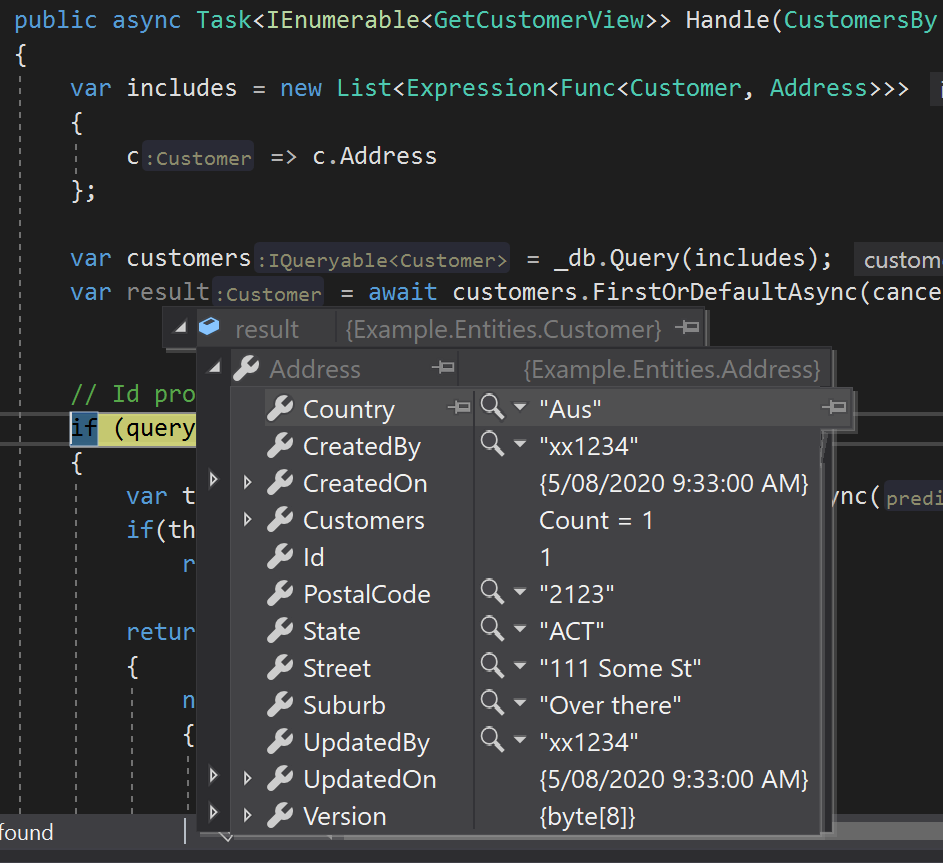 Means I'm not 'Fluent'ly chaining them from the client code's perspective, but I don't think it's terrible.

Not the answer you're looking for? Browse other questions tagged .net-core entity-framework-core c#-3.0 or ask your own question.