How to solve datatype conversions in sql server?

I am having trouble inserting data into my database. I created a web api on visual studio with the following data model

I am testing using postman with the following post request

And when debugging, I get error converting data type varchar to float. This can be seen in the image below. I do not know how to fix this i think the problem is in line 74 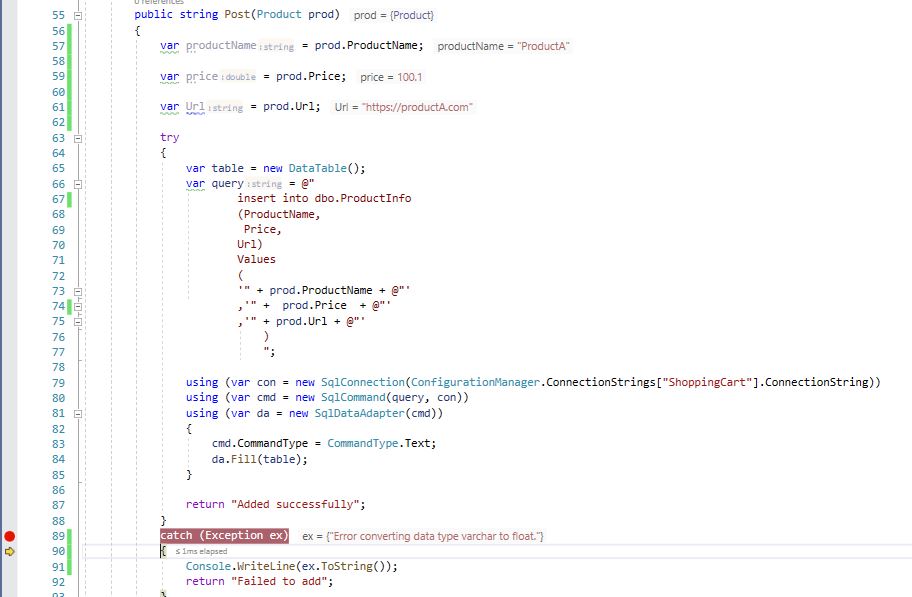 I created the database my running the following query

You're not using parameters. You're simply inserting variables into a string.

In your values, you're actually inserting it as a varchar, since you build the query through

Which results in the actual query string to become

So SQL Server now tries to convert these values for you, by casting the varchar to a float. Which it should still be capable of doing.

The error you're getting is that it can't do that. I notice you're also inserting the prod.Price, instead of the var Price variable. Are you certain prod.Price is properly formatted?

Because what it shows here on the screen is that the var price should work, due to auto casting. My guess could be that prod.Price perhaps is comma seperated decimal instead of point seperated. This would cause SQL Server to throw an error.

Or simply use proper SQL Parameterisation for your queries. Instead of concatting everything together in a single string (always fun to get SQL injected like this).

So having tested the in application conversion. In a simple C# console application, with a locale/culture that has comma seperated decimals as their convention, a double gets auto casted to comma seperated when 'adding' it to a string.

Not the answer you're looking for? Browse other questions tagged c# sql asp.net sql-server asp.net-web-api or ask your own question.

456
Should you choose the MONEY or DECIMAL(x,y) datatypes in SQL Server?
115
Why do we always prefer using parameters in SQL statements?

2773
How can I prevent SQL injection in PHP?
1538
How do I perform an IF…THEN in an SQL SELECT?
2831
Add a column with a default value to an existing table in SQL Server
1820
How to return only the Date from a SQL Server DateTime datatype
1896
How to check if a column exists in a SQL Server table?
1971
How to concatenate text from multiple rows into a single text string in SQL server?
1341
How can I do an UPDATE statement with JOIN in SQL Server?
3788
How do I UPDATE from a SELECT in SQL Server?
1344
How to Delete using INNER JOIN with SQL Server?