How could I determine which AWS location is best for serving customers from a particular region?

AWS has several locations for storage and EC2 instances to run upon with different pricing. How could I determine which location is best for a particular region. Is it intuitive (closer to your serving region is the best) or are there any reliability concerns (particular AWS location facing more outages than others). Is there any data available for making such decision?

I am developing an application that is mainly targeted towards Indian customers. So, I am considering Singapore or Tokyo as an option.

This project is used to generate the indexes (and visual map for reference) used by the TurnKey Hub to find the closest AWS data center for a user. [emphasis mine]

While a bit of a gimmick, the visualization is seriously cool and confirms resp. illustrates the reason for the at first sight surprising fact Josh mentioned already, namely that users in Australia currently tend to get better latency via the US West (Northern California / us-west-1) rather than the Asia Pacific (Singapore / ap-southeast-1) region. (Tip: checking Future Cables at the bottom right corner reveals this is likely going to change, which is further detailed in Greg's Cable Map, which indicates Australia might jump between both AWS locations latency wise in the years to come ;)

Meanwhile AWS is providing a helpful map illustrating their Global Infrastructure for a quick assessment, alongside respective details like e.g. number of availability zones and the API endpoint.

So in case your environment is comprised of an Auto Scaling EC2 Instances architecture already, simply applying this latency based routing should solve your problem automatically.

While the use case obviously targets offerings spawning multiple AWS regions, the sophisticated features around Latency Based Routing and Weighted Round Robin Record Sets might allow you to determine the desired information more easily yourself as well.

It will do HTTP ping from your browser to each AWS region.

NOTE for SO admins: I'm not affiliated with this service. I found it while prepping for AWS certification.

There is also a website for speed test: https://cloudharmony.com/speedtest if you easily want to check which region is best for you.

Here's a console tool that shows the nearest aws region:

It's written in golang and very easy to use:

Regions are ordered by the latency.

You can run it on any server and determine the nearest region for you.

Testing latency to different regions is obviously advisable! I'm located in Australia and many users here get better latency to US West than to Singapore - in part it comes down to local ISPs peering and international connectivity. It's relatively straightforward to test if you have users in the region you're targeting.

Reliability on the AWS side (i.e. not user network issues) is mostly a consequence of deployment across multiple Availability Zones. There are more choices in US regions than in APAC ones simply because they've been serving those markets longer. A side effect of this is that features are deployed relatively late to Singapore/Tokyo - normally new features start rollout in US East.

As you already have S3 and EC2 in mind as services you'd like to use and they're both available in closer regions, evaluate whether newer web services from AWS are immediately important - if not, shoot for something (latency) close by.

Amazon is now offering the ability to route to a datacenter based on lowest end-user latency. It's Route53's new "Latency Based Routing"!

Good tool/site to Check Latency from our location 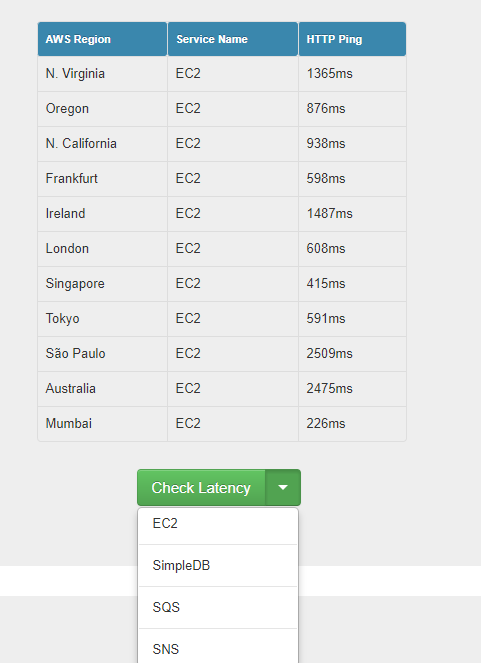 EDIT: Look at Mark Tsai's answer. That's the way to go (Route 53 didn't exist when I wrote this one)

This probably belongs in ServerFault but here goes:

What you are basically asking for is Geo DNS.

Right now it's not directly supported in AWS - although I've seen some talk of it being implemented in some AWS forum posts - most probably in their Route 53 service.

Until then, you could look into 3rd party solutions such as Zerigo that would provide you with Geo DNS facility.

EDIT: There is a post on ServerFault that talks about Geo DNS providers

As for your question regarding performance and AWS reliability: You should consider serving up your site from the nearest AZ to your user - it makes perfect sense in terms of speed and not having all your instances in a single AZ. You could check AWS Service Health Dashboard to get an general idea how reliable Amazon's services are in different AZs. Note that this data is directly from Amazon - I've not seen any independent stats anywhere else.

http://blog.datapath.io/aws-network-latency-map discusses a commercial offering to get this information. It shows latency time from the location you specify, to the AWS service you specify, on a map.

Not the answer you're looking for? Browse other questions tagged amazon-s3 amazon-ec2 amazon-web-services or ask your own question.

27
Need help deciding between EBS vs S3 on Amazon Web Services
13
AWS architecture when multi-regions
0
AWS EC2 cannot connect to RDS
4
AWS alternative to DNS failover?
0
How to measure speed from AWS regions to specific location (not mine)?
6
How to copy an AMI from Ireland region to China region in AWS
34
How to get the region of the current user from boto?
2
CloudFront - Serve static website from S3, route API requests to EC2 on custom port
0
How much will it cost to read from an S3 bucket in the same region but on different account