Xcode 12, building for iOS Simulator, but linking in an object file built for iOS, for architecture 'arm64'

I am trying to get a large (and working on Xcode 11!) project building in Xcode 12 (beta 5) to prepare for iOS 14. The codebase was previously in Objective-C, but now it contains both Objective-C and Swift, and uses pods that are Objective-C and/or Swift as well.

What may be going on here? I have not been able to reproduce this with a simpler project yet.

Basically, you have to exclude arm64 for the simulator architecture, both from your project and the Pod project,

Simply putting, Xcode will fail to build your application anytime it tries the command line, xcodebuild, (which defaults to release build, see the general tab of your project setting) or otherwise and tries to build all architectural variants supported by the run destination. So a simple workaround to this issue is to set "Build Active Architecture Only (ONLY_ACTIVE_ARCH)" to Yes in your libraries/apps, even for release mode.

One thing I was concerned about that what will be the impact of this when we actually archive the libraries and applications. During archiving applications usually take the "Release" configuration and since this will be creating a release build considering only the active architecture of the current run destination, with this approach, we may lose the slices for armv7, armv7s, etc. from the target build. However, I noticed the documentation says (highlighted in the attached picture) that this setting will be ignored when we choose "Generic iOS Device/Any Device" as the run destination, since it doesn't define any specific architecture. So I guess we should be good if we archive our app choosing that as a run destination.

I found a solution! SwiftUI Previews not working with Firebase

You can add a user-defined setting from the plus button in Build Settings:

The proposed answers are outdated/incorrect.

I added "arm64" to both Release and Debug mode for the "Any iOS Simulator SDK" option. 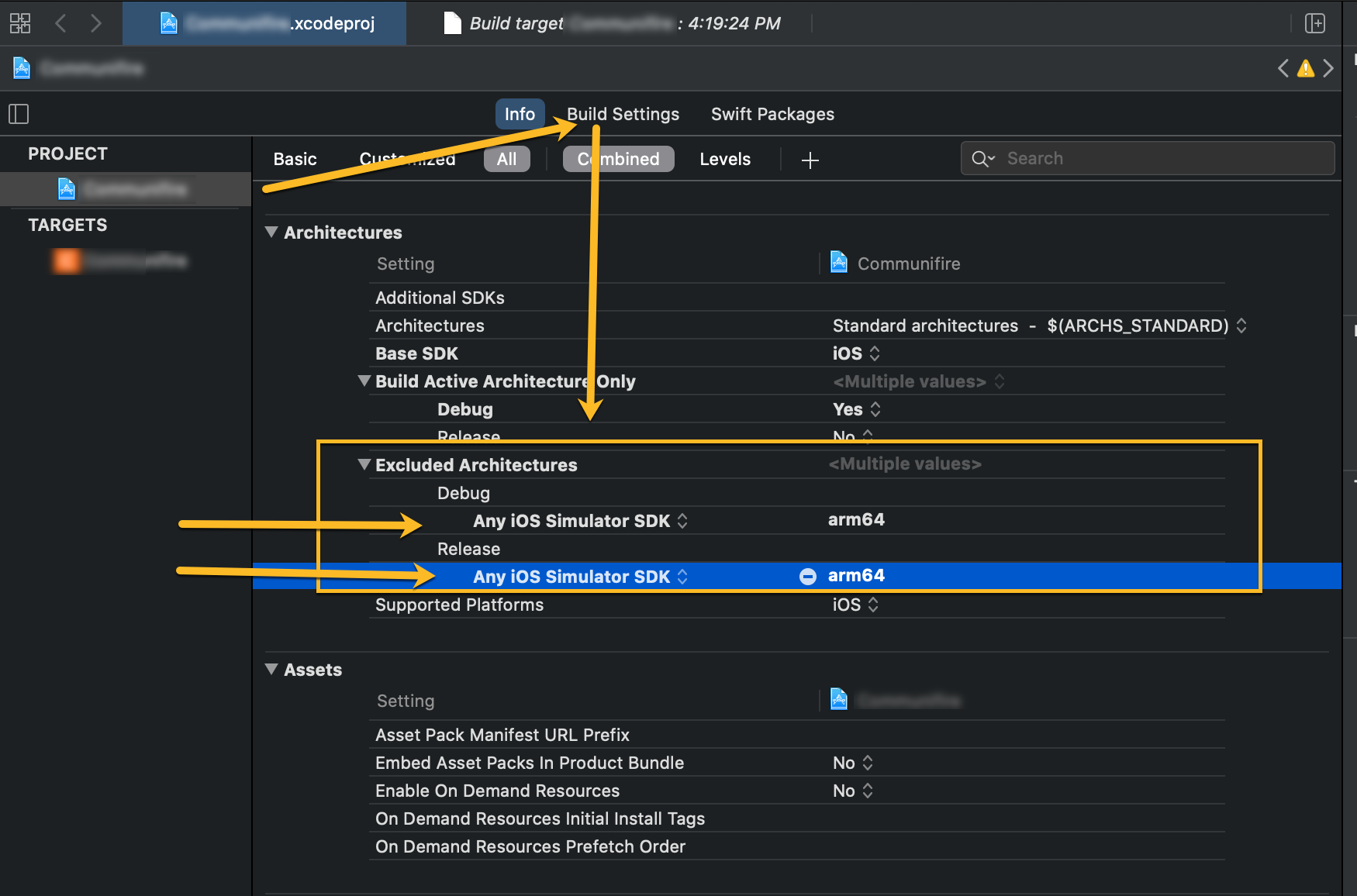 Hidden Gem in all these answers

I had changed "Excluded Architectures" in my target for the main project, but not for the PODS project. Truly hidden gem. I have been with this problem for weeks now.

If you have trouble in Xcode 12 with simulators, not real device, yes you have to remove VALID_ARCHS settings because it's not supported anymore. Go to "builds settings", search "VALID_ARCHS", and remove the user-defined properties. Do it in every target you have.

Still, you may need to add a script at the bottom of your podfile to have pods compiling with the right architecture and deployment target:

I solved the problem by adding "arm64" in "Excluded Architectures" for both the project target and pod target.

Go to Targets section, select each target and do the following:

I needed the EXCLUDED_ARCHS=arm64 flag when building the framework for simulators from the command line.

After trying almost every answer to the question and reading through Apple developer forums I found only one solution worked for me.

I am building a universal framework that is consumed in a Swift app. I was unable to build to the simulator without architecture errors.

In my framework project I have a Universal Framework task in my build phases. If this is the case for you:

*** If you are developing a framework and have a demo application as well, this setting has to be turned on in both projects.

I found this after trying a lot of useless answers online, and this works for me.

I was facing the same issue and trying to launch a React Native app on an M1 Mac. Note that my Intel Mac with the same project worked well without this error.

What solved the problem for me was to force Xcode to open through Rosetta.

It worked for me when I set $(ARCHS_STANDARD) for VALID_ARCHS for Debug for Any iOS Simulator SDK. Also I have set YES for ONLY_ACTIVE_ARCH for Debug.

In my case, the error was thrown by GTMAppAuth which I was using with Google sign in my Flutter project.

Solution: You have to go to that package and click YES in Build Active Architecture Only.