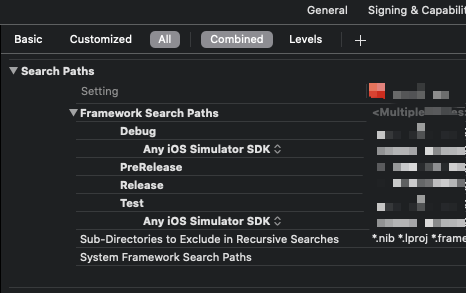 After excluding arm64 I always got ARCHS[@]: unbound variable. For me the only solution was to add x86_64 to the target build setting as mentioned here Problems after upgrading to Xcode 12:ld: building for iOS Simulator, but linking in dylib built for iOS, architecture arm64 You also might remove the exclude arm64 you added before.

I was trying to build xcFramework when faced this issue, nothing was helping, manage to resolve this with lipo, sharing my Script:

It seems to be an M1 and cocoa pods problem. Excluding arm64 worked for me, but it led to other problems (i.e. No Such Module X). This is what worked for me, and you do not need to exclude arm64 from every build from there on out.

You can disable Rosetta right after and it will still work.

MAKE SURE You do not have arm64 excluded when you try to build your project again, it will lead to the same problem. It should work from there. This also only works if you have the system version of Ruby, it won't work on Ruby 2.7 for cocoa pods.

In my case the error was thrown by GTMAppAuth which i was using Google sign in my Flutter project.

Solution: You have to go to that package and click YES in Build Active Architecture Only.

In my case I was trying to run on an watchOS 7 simulator in Relese mode but the iOS 14 simulator was in Debug mode.

So simply putting both sims in Debug/Release mode solved the problem for me!

Switch Build Configuration back to Debug mode or turn on Build Active Architecture Only for both Debug and Release mode. The reason is your library/framework doesn't support new Simulator architecture ARM64 (run on Mac with Apple Silicon processor)

Add line "arm64" (without quotes) to path: Xcode -> Project -> Build settings -> Architectures -> Excluded architectures Also, do the same for Pods. In both cases for both debug and release fields.

Errors mentioned here while deploying to simulator using Xcode 12 are also one of the things which have affected me. Just right-clicking on each of my projects and showing in finder, opening the .xcodeproj in Atom, then going through the .pbxproj and removing all of the VALIDARCHS settings. This was is what got it working for me. Tried a few of the other suggestions (excluding arm64, Build Active Architecture Only) which seemed to get my build further but ultimately leave me at another error. Having VALIDARCH settings lying around is probably the best thing to check for first.

Sharing the solution which worked for me, which may help someone

Issue when compiling for simulator:

To get this working for Calabash automated tests

There is a pull request up to fix the issue of xcode 12 not working with calabash https://github.com/calabash/run_loop/pull/757

A temporary solution is to use this WIP branch, although it is not great to have to use this as it is a draft PR. Xcode 12 support for Calabash will hopefully come in the future.

Change in your Gemfile