Is it undefined behavior to use functions with side effects in an unspecified order?

I know that things like x = x++ + ++x invokes undefined behavior because a variable is modified multiple times within the same sequence point. That's thoroughly explained in this post Why are these constructs using pre and post-increment undefined behavior?

But consider a thing like printf("foo") + printf("bar"). The function printf returns an int, so the expression is valid in that sense. But the order of evaluation for the + operator is not specified in the standard, so it is not clear if this will print foobar or barfoo.

But my question here is if this also is undefined behavior.

printf("foo") + printf("bar") does not have undefined behavior (except for the caveat noted below) because the function calls are indeterminately sequenced and are not unsequenced.

To distinguish between the latter two, suppose writing to stdout requires putting bytes in a buffer and updating the counter of how many bytes are in the buffer. (For this, we will neglect what happens when the buffer is full or should be sent to the output device.) Consider two writes to stdout, called A and B.

In the former case, both writes are completed, but they can be completed in either order. In the latter case, the behavior is undefined. One of the possibilities is that B writes its bytes in the same place in the buffer as A’s bytes, losing A's bytes, because the counter was not updated to tell B where its new bytes should go.

In printf("foo") + printf("bar"), the writes to stdout are indeterminately sequenced. This is because the function calls provide sequence points that separate the side effects, but we do not know in which order they are evaluated.

There is a sequence point after the evaluations of the function designator and the actual arguments but before the actual call. Every evaluation in the calling function (including other function calls) that is not otherwise specifically sequenced before or after the execution of the body of the called function is indeterminately sequenced with respect to the execution of the called function.

Thus, if the C implementation happens to evaluate printf("foo") second, there is a sequence point just before the actual call, and the evaluation of printf("bar") must have been sequenced before this. Conversely, if the implementation evaluates printf("bar") first, then printf("foo") must have been sequenced before it. So, there is sequencing, albeit indeterminate.

There is a sequence point immediately before a library function returns.

Therefore, the two function calls are indeterminately sequenced. The rule in 6.5 2 about unsequenced side effects does not apply:

(Not to mention the fact that stdout is not a scalar object.)

There is a hazard that the C standard permits standard library functions to be implemented as function-like macros (C 2018 7.1.4 1). In this case, the reasoning above about sequence points might not apply. A program can force function calls by enclosing the name in parentheses so that it will not be treated as an invocation of a function-like macro: (printf)("foo") + (printf)("bar").

It is Unspecified Behaviour 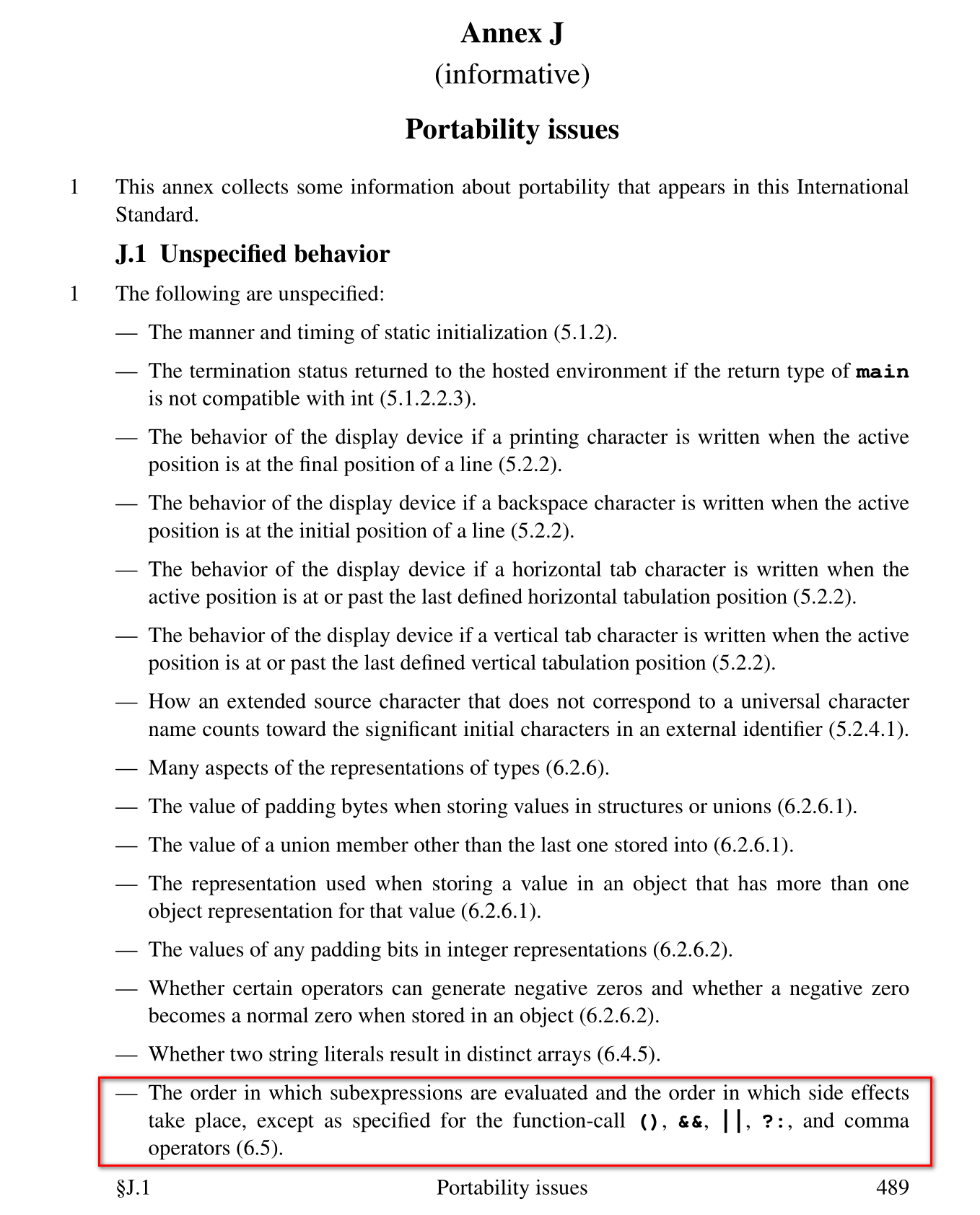 You're probably asking because a program that tries to read an unspecified value (e.g. uninitialised int) has undefined behaviour.

That is not the case with unspecified order or indeterminately sequenced operations. You don't know what you'll get, but the program has well-defined behaviour.

The writing to stdout doesn't cause a problem because the value is not "unspecified" in that sense either. You can think of it more as an implementation-defined value, as a result of the unspecified ordering.

tl;dr: not everything "unspecified" leads to being "undefined".

A point I haven't seen mentioned, however, is that while many compilers are designed to process certain operations on primitive types in such a way that distinctions between "unsequenced" and "indeterminately sequenced" don't matter, some optimizers may produce machine code where such things could matter, especially in multi-threaded scenarios, so it's good to be concerned about such distinctions.

Consider a function like the following, if processed by gcc 9.2.1 with options -xc -O3 -mcpu=cortex-m0 [the Cortex-M0 is a popular current-production 32-bit core found in low-end microcontrollers]:

If the value of *p were to e.g. change from 0xFFFF to 0, or 0 to 0xFFFF, the function might return 0xFFFF even though there would be no value *p could have held that would yield that result.

Although compilers when the Standard was written would almost invariably extend the semantics of the language by processing many actions "in a documented fashion characteristic of the environment" regardless of whether the Standard would require them to do so, some "clever" compiler writers seek to exploit opportunities where deviating from such behaviors would allow "optimizations" that might or might not actually make code more efficient.

Not the answer you're looking for? Browse other questions tagged c undefined-behavior or ask your own question.

865
Why are these constructs using pre and post-increment undefined behavior?
588
Undefined, unspecified and implementation-defined behavior
0
Expression evaluation in C vs Java
1
Operator precedence versus order of evaluation