How does the Hopcroft-Karp algorithm work?

I am currently working on a project to pictorially explain the Hopcroft-Karp algorithm.

I am using the pseudo-code from the Wikipedia article.

This would do fantastically if only I didn't have to understand the algorithm completely to use it.

My questions are as follows: What is the meaning of the Dist[] array in the pseudo-code, and how is the layering of the graph done in the Breadth-First-Search. I have a grasp on the workings of the DFS.

algorithm matching
share|improve this question
edited May 23 '17 at 11:54

So that code initializes the first layer of the BFS tree, setting all "free nodes" v (i.e. Pair[v] == NIL) to be at distance 0.

and this code continues on building the BFS tree layer by layer, for nodes u that are neighbors of v (at distance exactly one).

Here's fully annotated code for Hopcroft Karp algorithm that I'd wrote. Below annotated code hopefully helps explain pretty much every nook and cranny of this beautiful algorithm. It's in C# but code can be easily translated to C++/Java. You can also find the test cases on my Github repo.

Note: I've also added the summarized version of this explanation and below diagram in Wikipedia article. 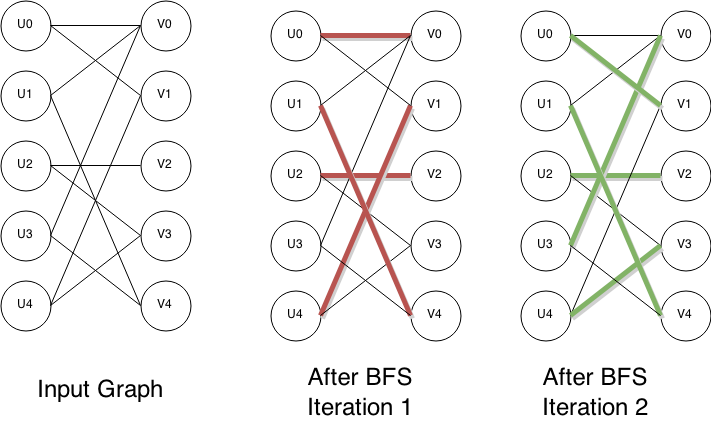 Not the answer you're looking for? Browse other questions tagged algorithm matching or ask your own question.

7
Hopcroft–Karp algorithm in Python
0
How to match items based on their properties?

3859
How do I check if an array includes a value in JavaScript?
1407
What is the best algorithm for overriding GetHashCode?
7
Hopcroft–Karp algorithm in Python
1081
Ukkonen's suffix tree algorithm in plain English
1604
Image Processing: Algorithm Improvement for 'Coca-Cola Can' Recognition
862
How to find time complexity of an algorithm
3875
How to pair socks from a pile efficiently?
1902
What is the optimal algorithm for the game 2048?