I have a business application I am setting up to deploy using MSIX. I have a test installer project that has been working for several months and I am now attempting to setup a production version but have come across an issue where the .appinstaller fails but the .msixbundle will install the app.

I have a pair (Test & Prod) ASP .Net Core websites setup to host the app updates and installer websites, they are configured to statically host the update folder.

The issue is with the production installer project. After I publish, if I click on the 'Get The App' link from the installer website it will download the .appinstaller file and open it in the Windows App Installer. I then click on install and get a not so helpful error message shown below. 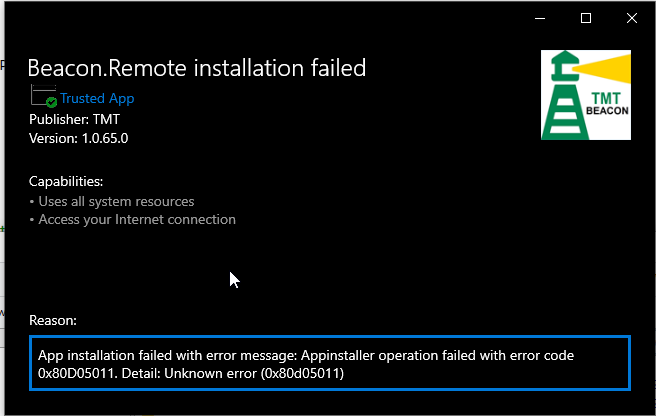 What I have checked

I am not sure where else to look or what else I could do to resolve this issue.

Had the same issue. (Winforms, Net48, wapproj, x86) Couldnt solve ist also. Just installed the package on a "fresh machine" (vm) and it worked. So I'm guessing its not "your code" ist some "unclean installation state" on this specific machine.

There is a service in windows called DoSvc which is a special appinstaller breaking service, designed to make sure app installation never goes smoothly. If you have any issue with installing an appx package that can not be reproduced on another machine it is worth restarting this service as that often helps.

See AppInstaller XML Issue for further details (not the same issue but similar).

Not the answer you're looking for? Browse other questions tagged msix or ask your own question.

1
How to handle prerequisites for an .msix installer?
4
Can't install MSIX package with powershell
2
MSIX c# - Update and deploy on server/OneDrive
1
How can I get my MSIX installer to add my CLI application binary to the PATH?
0
Downgrading an MSIX-installer application after setting ForceUpdateFromAnyVersion
1
How to change install location of msix bundle?
0
MSIX Packaging Tool: Installed app is looking for icon in system32 and isn't found
1
MSIX Installed WPF application that uses Azure SSO will not launch
1
How do I get the MSIX appinstaller to output the correct settings during each build/publish?