Remove all unused resources from an android project

I want to remove all unused layouts, strings, drawables, colors, etc from my Android res directory. Are there any tools that will give me a list of files and I can remove from my repository and elements within specifics files (e.g. unused string entries) that are no longer used?

You can easily search for unused resources from Android Studio. Just press CtrlAltShifti and type "unused resources" (without quotes). That will execute lint. Super easy way to run lint commands (and other stuff from IDE).

Use Do Refactor to remove all Resources at once.

Update: use ⌘OptionShifti for mac

Since ADT 16 you can use Android Lint. It is really amazing tool.

Android Lint is a new tool for ADT 16 (and Tools 16) which scans Android project sources for potential bugs.

Here are some examples of the types of errors that it looks for:

However, it has some issues (don't know if they're already fixed) and if you want to delete hundreds of supposedly unused resources I'd recommend to manually compile project several times during resource removing to be sure that Lint didn't remove something needed.

Since Support for the ADT in Eclipse has ended, we have to use Android Studio. 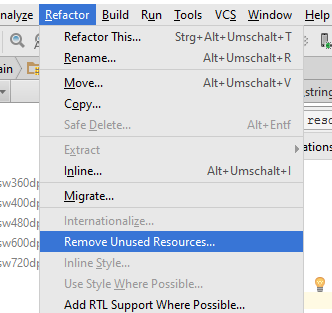 To enable this add the line shrinkResources true in your gradle file.

We open source a tool that removes all the unused resources in your android project based on the lint output. It can be found here: https://github.com/KeepSafe/android-resource-remover

Beware if you are using multiple flavours when running lint. Lint may give false unused resources depending on the flavour you have selected.

In Android Studio 2.0 and above in menu select Refactor-->click on Remove Unused Resources...

Press Ctlr+Alt+Shift+i one dialog box will apper, then type unused , you will find number of options select and remove unused resources

(Shortcut For Mac shift+command+option+i , Ctrl + Shift + A on Windows/Linux).

Select the desired inspection from the list, then select inspection scope ->OK 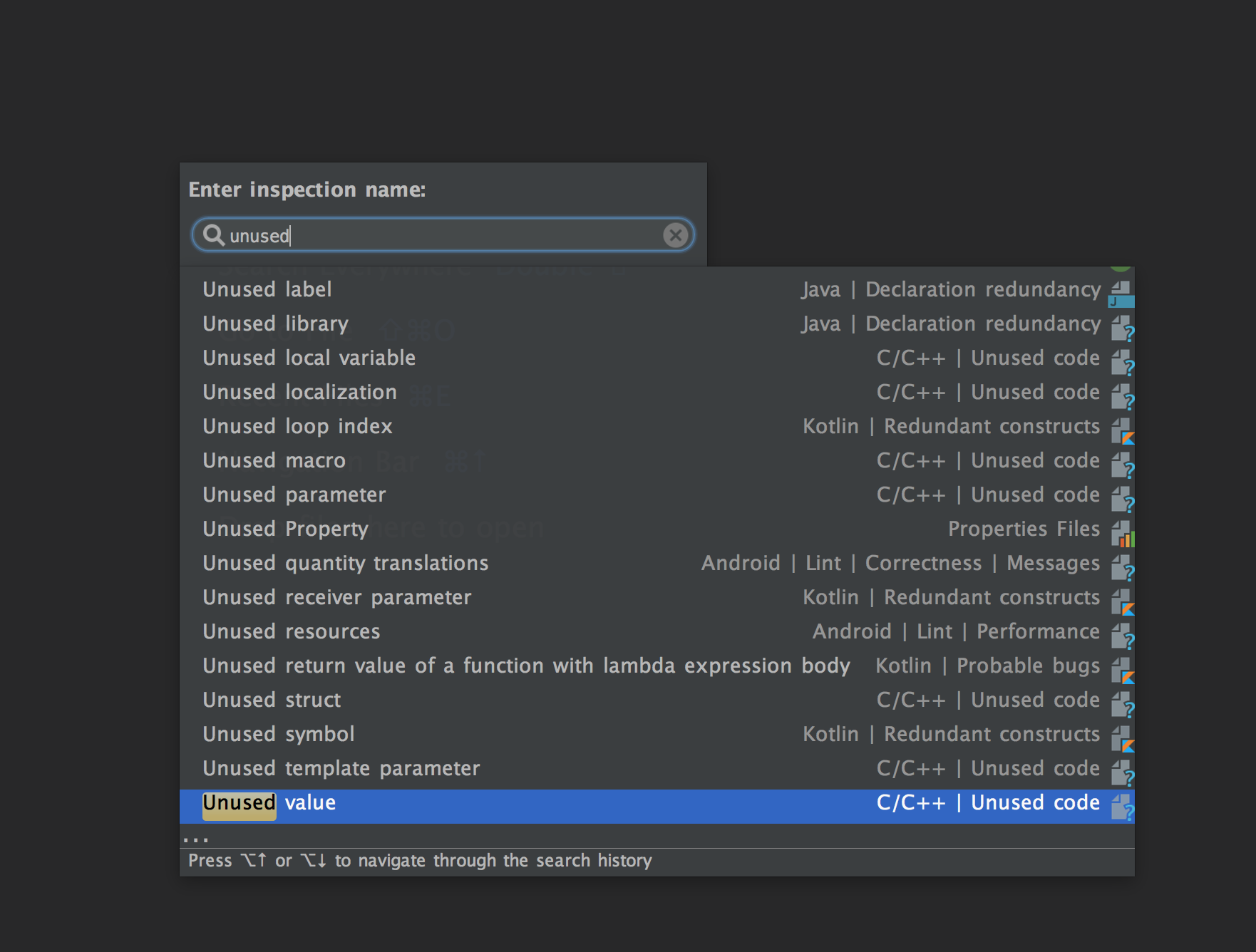 Attention Android Wear developers: "Remove Unused Resources" will delete the xml file where you declare the capability name (res/values/wear.xml) and the phone won't be able to connect to the watch. I spent hours trying to figure out this bug in my app.

It's easy (at least in my version of Eclipse)

Now when you open strings.xml, you will see that unused string are highlighted.

You can fix other potential issues.

Maybe useful Andround Unused Resources is a Java application that will scan your project for unused resources. Unused resources needlessly take up space, increase the build time, and clutter the IDE's autocomplete list.

To use it, ensure your working directory is the root of your Android project, and run:

When we define shrink resources true that time we can also define which resources we wanna keep and which don't I have added xml file in res/raw folder named keep.xml

before going further generate a single signed build and check in apk analyser tool which will show drawable-xhdpi-v4 has messenger_button_send_round_shadow.png which i want to remove for this test

so that way you can remove files from library it self you can also remove layouts by @layout/layout name if that drawable has been used by layout and so....

But if you are intending to remove png-drawables (or other image files), you should also consider moving all the drawable-xxxx folders out of your project into a temporary folder, then do a rebuild all, and take a look at the build message list which will tell you which ones are missing.

This can be specially useful if you want to get an overview of which resources you are effectively using and maybe replace them with an icon font or svg resources, possibly with the help of the Android Iconics library.

Android Assets Viewer is designed to help visually inspect the graphics packed (as drawables) within your .apk (you can also just upload a zip file of your res folder if you prefer):

So for removing unused resources, this might work well in tandem with the Lint checks to help make sure everything that should be there is. It also helps you identify a few other potential problems with your drawables: wrong bucket, wrong graphic, etc.

Not the answer you're looking for? Browse other questions tagged android android-resources or ask your own question.

1085
Fling gesture detection on grid layout
383
How to remove all debug logging calls before building the release version of an Android app?
424
Background ListView becomes black when scrolling
748
How to avoid reverse engineering of an APK file?
1
Android: Remove unused resources when releasing
105
Remove Project from Android Studio
768
Dilemma: when to use Fragments vs Activities:
6
How to remove unused resources from libraries?
31
How to delete an unused string resource for all configurations in Android Studio?