I'm trying to build a Visual Studio 2019 solution from command line (though a PowerShell script), I need to have 2 builds - one for 64-bit and one for 32-bit though the script.

From Configuration Manager I have added x86 and x64 platforms to the Platform: 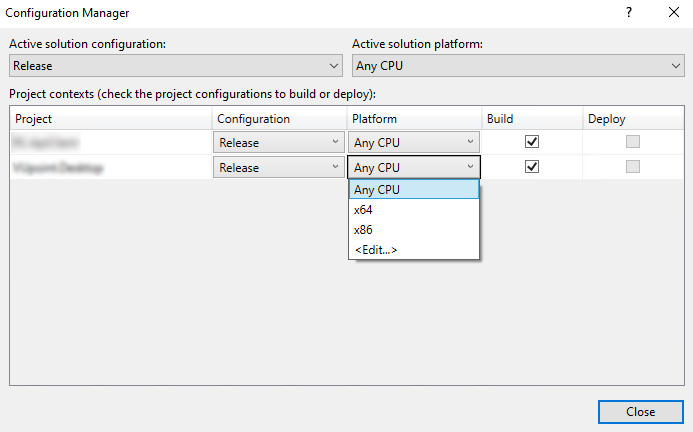 And in the project properties I have set up the Platform target accordingly:

I'm using the following command lines to build with MSBuild:

But it seems to ignore the /p:Platform because it does not matter if I state x86 or x64 it always builds the "Active" platform set in Configuration Manager. But, if I put in platform an invalid value (for instance x123) the build would fail because that does not exist.

How can I make MSBuild actually build with the stated /p:Platform?

If you build your sln file, you should change the solution platform rather than the project platform.

1) first, delete every project platform and do a clean for your project.And only retain the platform Any CPU.

3) close VS Instance, delete the bin and obj folder of every project

then run your powershell with /p:Platform=x64 or x86. And it works well in my side. And it can return x86 or x64 output files without any problems.

Not the answer you're looking for? Browse other questions tagged visual-studio msbuild visual-studio-2019 or ask your own question.

0
Visual Studio 2019 configuration the complied .dll assembly does not exist

32
How do I force MSBuild to compile for 32-bit mode?
1
MSBuild appending data to configuration string
159
How do I specify the platform for MSBuild?
480
How do I fix the Visual Studio compile error, “mismatch between processor architecture”?
1
Build C# project with msbuild.exe doesn't overwrite project target platform configuration?
4
msbuild: how to select the application store for configuration
2
MSBuild target the most recent TargetPlatformVersion
2
Cannot compile template C++/CLI (.NET Core 3.1) project via dotnet build command