Line of intersection between two planes

How can I find the line of intersection between two planes?

I know the mathematics idea, and I did the cross product between the the planes normal vectors

but how to get the line from the resulted vector programmatically

The equation of the plane is ax + by + cz + d = 0, where (a,b,c) is the plane's normal, and d is the distance to the origin. This means that every point (x,y,z) that satisfies that equation is a member of the plane.

The intersection between the two is the set of points that verifies both equations. To find points along this line, you can simply pick a value for x, any value, and then solve the equations for y and z.

If you make x=0, this gets simpler:

Finding a point on the line

To get the intersection of 2 planes, you need a point on the line and the direction of that line.

Finding the direction of that line is really easy, just cross the 2 normals of the 2 planes that are intersecting.

But that line passes through the origin, and the line that runs along your plane intersections might not. So, Martinho's answer provides a great start to finding a point on the line of intersection (basically any point that is on both planes).

In case you wanted to see the derivation for how to solve this, here's the math behind it:

Then the plane equations are (A terms were eliminated since we chose x=0):

We want y and z such that those equations are both solved correctly (=0) for the B1, C1 given.

Add the eqs to get

Note the best variable to make 0 is the one with the lowest coefficients, because it carries no information anyway. So if C1 and C2 were both 0, choosing z=0 (instead of x=0) would be a better choice.

The above solution can still screw up if B1=0 (which isn't that unlikely). You could add in some if statements that check if B1=0, and if it is, be sure to solve for one of the other variables instead.

From user's answer, a closed form solution for the intersection of 3 planes was actually in Graphics Gems 1. The formula is:

A function that intersects 3 planes: 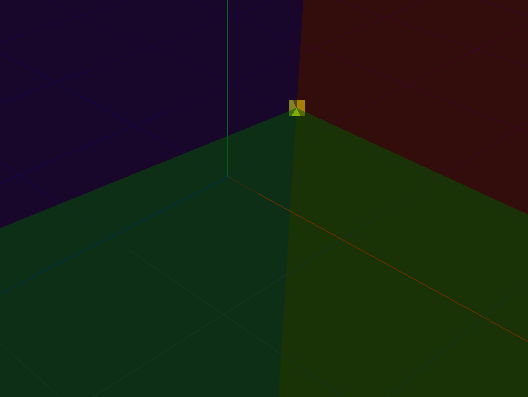 Once you have a point of intersection common to the 2 planes, the line just goes

Where P is the point of intersection, t can go from (-inf, inf), and d is the direction vector that is the cross product of the normals of the two original planes. 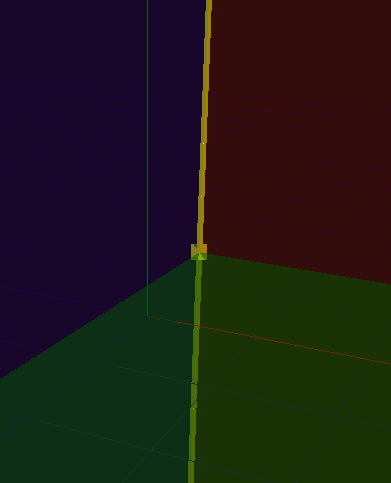 The "robust" (2nd way) takes 48 elementary ops by my count, vs the 36 elementary ops that the 1st way (isolation of x,y) uses. There is a trade off between stability and # computations between these 2 ways.

It'd be pretty catastrophic to get (0,inf,inf) back from a call to the 1st way in the case that B1 was 0 and you didn't check. So adding in if statements and making sure not to divide by 0 to the 1st way may give you the stability at the cost of code bloat, and the added branching (which might be quite expensive). The 3 plane intersection method is almost branchless and won't give you infinities.

Adding this answer for completeness, since at time of writing, none of the answers here contain a working code-example which directly addresses the question.

Though other answers here already covered the principles.

Finding the line between two planes can be calculated using a simplified version of the 3-plane intersection algorithm.

While this works well for 2 planes (where the 3rd plane can be calculated using the cross product of the first two), the problem can be further reduced for the 2-plane version.

Including this code-example, since it may not be immediately obvious.

This method avoids division by zero as long as the two planes are not parallel.

If these are the planes:

1) Find a vector parallel to the line of intersection. This is also the normal of a 3rd plane which is perpendicular to the other two planes:

2) Form a system of 3 equations. These describe 3 planes which intersect at a point:

4) The parametric equations of the line of intersection are:

The determinant-based approach is neat, but it's hard to follow why it works.

This should give the same point as the determinant-based approach. There's almost certainly a link between the two. At least the denominator, n2 • v, is the same, if we apply the "scalar triple product" rule. So these methods are probably similar as far as condition numbers go.

Don't forget to check for (almost) parallel planes. For example: if (dir • dir < 1e-8) should work well if unit normals are used.

You have two planes with two normals:

The cross product is the direction of the Intersection Line:

The class above has a function to calculate the distance between a point and a plane. Use it to get the distance of some point p on C to both planes:

Not the answer you're looking for? Browse other questions tagged math language-agnostic plane or ask your own question.

0
Find any point on a 3D line defined by implicit equations
3
Faster tetrahedron-tetrahedron intersection
2
How to find 3D coordinate of point based on 4 distances from known points
0
Intersection points between 2 discs in 3d
0
Get Intersection line between two rectangles in 3D
1
How to test of 2 sets of planes (each defining a volume in 3d space) overlap?
-2
Get endpoints of the line segment defined by the intersection of two rectangles