It has a basic view that is enabled for Domino Data Server Operations. I have checked the box on the Advanced Properties of the view and it works when I query it. 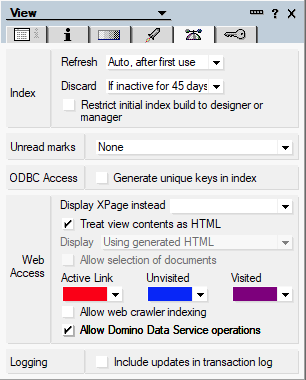 When changes are made to the view, and these are committed to source control the value for "Allow Domino Data Services" is never exported, which means that when we deploy to production, some important parts of the design don't get deployed.

I have had a check of some of the other options in that tab and some of them don't seem to produce any changes in the On Disk Project in Source Control e.g. "Allow Web Crawler Indexing".

This behaviour is the same whether we use R10 or R11. We don't have an R9 installation to test.

Does anyone know if there is a setting to change to include these flags?

Did a quick test but I get the same results unfortunately.

In non-binary DXL there apparently is no equivalent for that setting and the others you tested. I can see that that's bad when you're working in a team.

Only alternative I can think of is to stop using DDS and switch to the closest alternative: an XPage with the ExtLib REST control on it. From the top of my head the output of that is pretty much the same if you enable the default columns.

Is it safe to assume that when that code is pulled down by another developer that the flag is not checked? I've been out of domino development for a while but I do recall seeing similar behavior to properties when the metadata file (I forget what it is called) is not pushed up along with the main design element. Typically we would not push up that file unless it was a new design element but in some cases we had to if a property changed.

A shot in the dark - I hope it helps.

If you use swiper, it clear $webFlags fields.

Not the answer you're looking for? Browse other questions tagged lotus-domino domino-designer-eclipse or ask your own question.

1
An example of what Notes/Domino DXL cannot express?
3
Source Control in Lotus Domino Designer
1
how to setup lotus notes database to allow more than one concurrent user?
2
How do I export the components of an app in Lotus Domino Designer?
2
Source control enablement for Java Code in Domino Projects
2
Linking ODP back to NSF -
0
Is it correct to select based on date in a Lotus Notes View?
1
How to access Lotus Notes document 'hidden' in categorized view
0
Multiple number of file attachments - DB Size issue
0
IBM Domino - delete shared view & convert NSF application to NTF (template)