Setup CodePipeline - Deploy step has a status of failed

When setting up CodeDeploy following this tutorial, under the last step of Setup CodePipeline 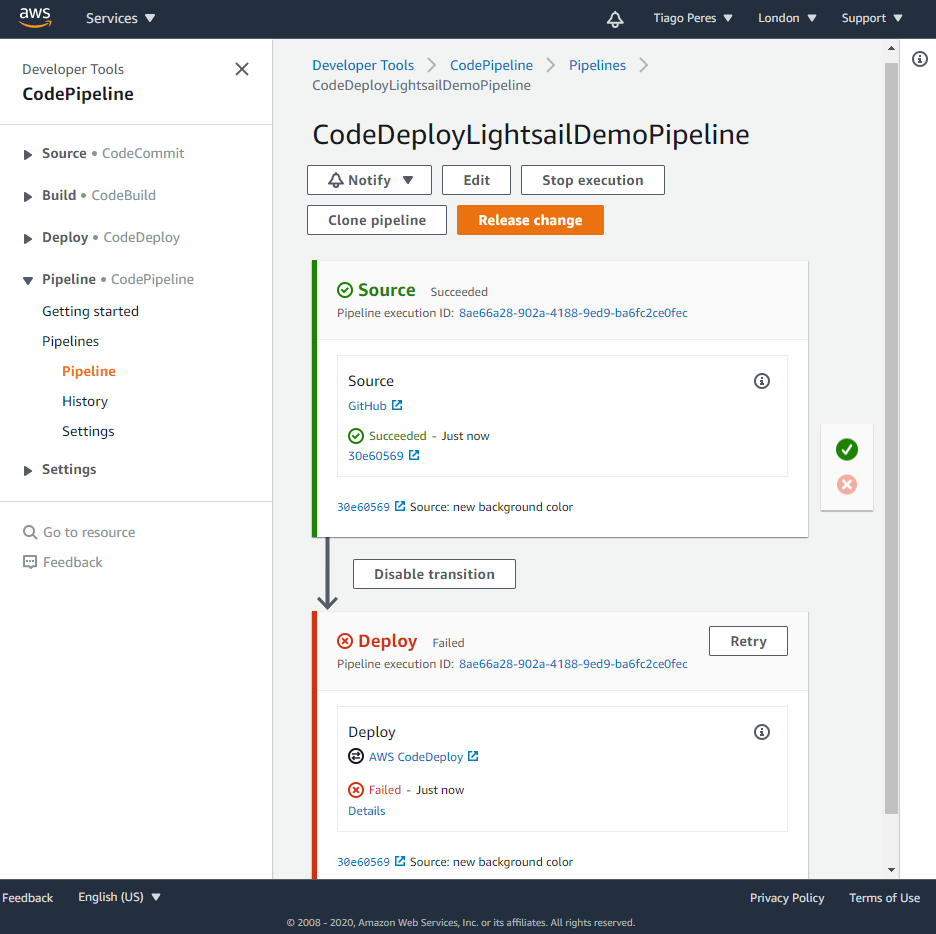 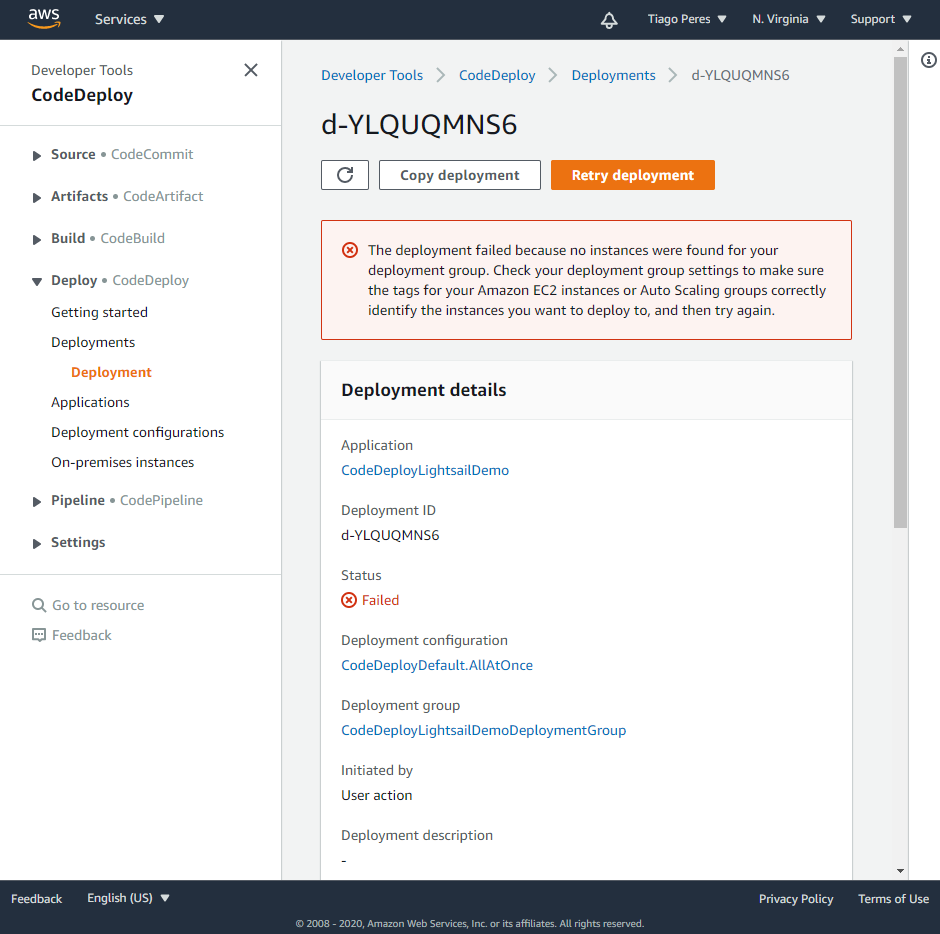 This was most likely due to a problem in locations - sometimes it was used N. Virginia and other times London.

So, I went to CodeDeploy, deleted the application in N. Virginia and created one with its deployment group in London. Then, created a new pipeline there in London.

The deployment failed this time too but with a different reason 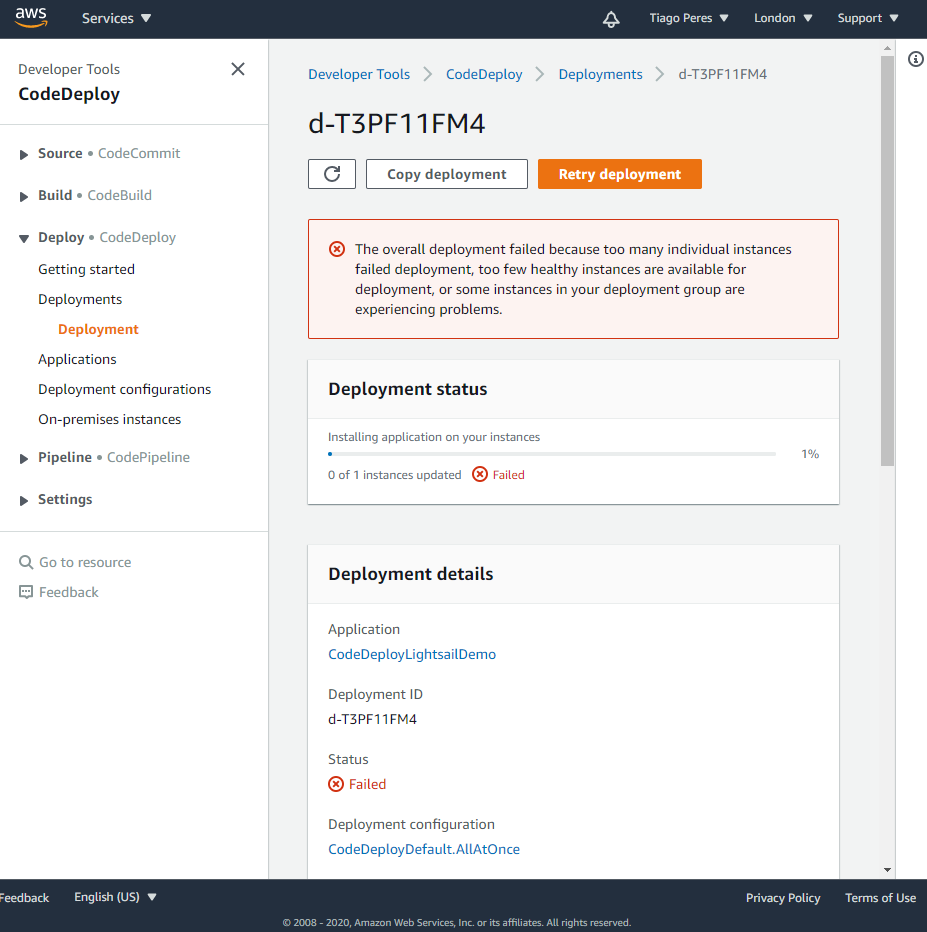 In order to fix that, I've deleted both pipelines and created a new one. Since I had to change the role, I used AWSCodePipelineServiceRole-eu-west-2-CodeDeployLightsailDemoPipeline but this got me into troubles in the moment of Creating the pipeline

Could not create role AWSCodePipelineServiceRole-eu-west-2-CodeDeployLightsailDemoPipeline 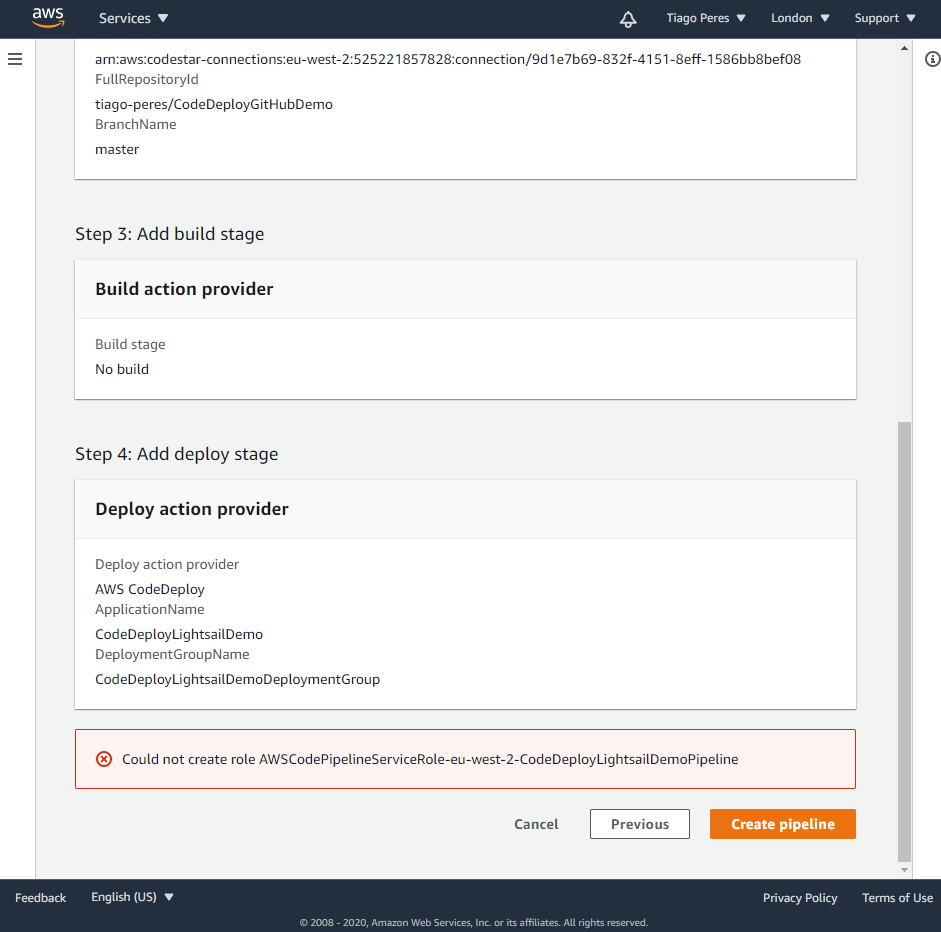 So, I changed it to AWSCodePipelineServiceRole-eu-west-2-CodeDeployLightsailDemoP. Then, this got me into another problem 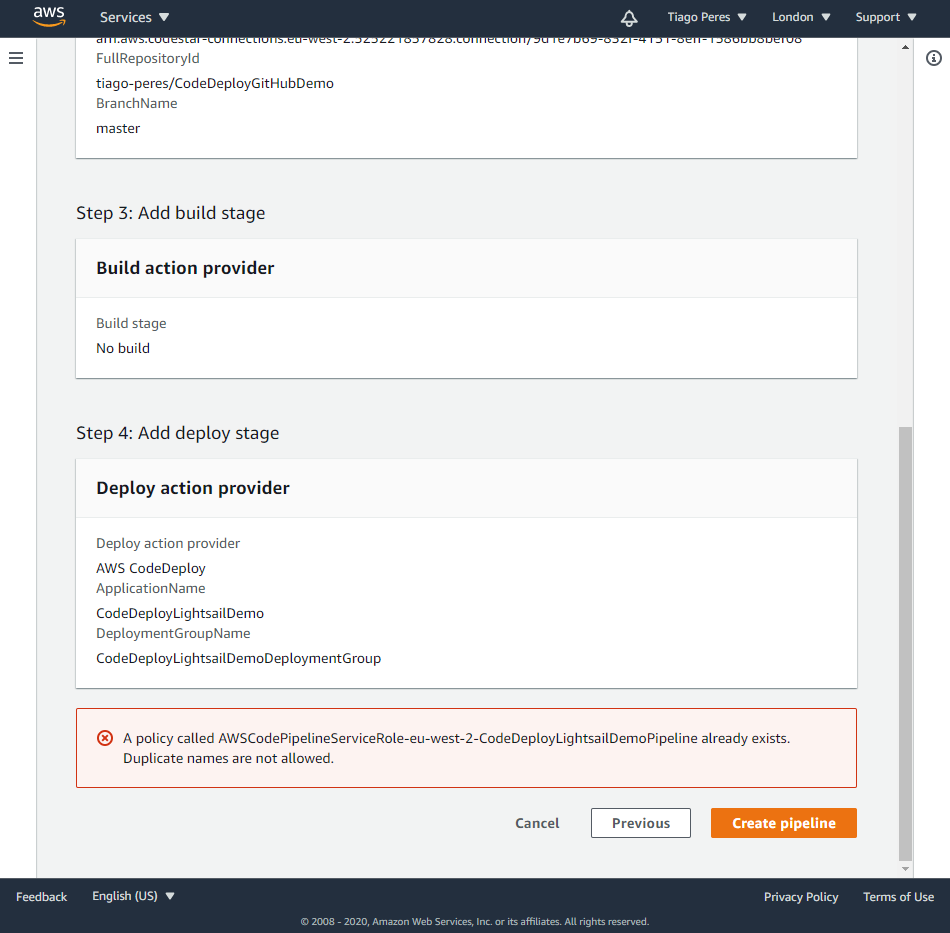 This got me into the same

This is what the information present in Deployment ID > View events 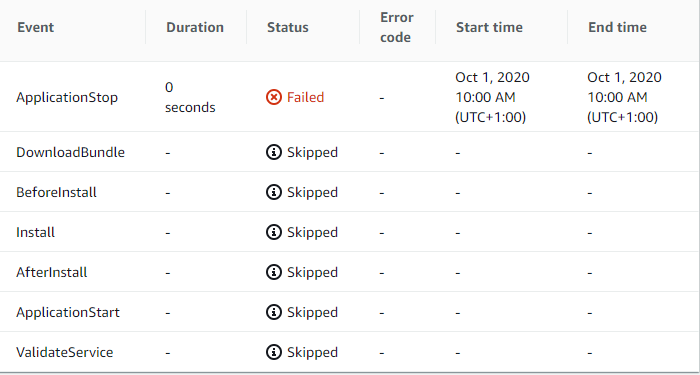 According to Marcin, I should have found the appspec.yml

So, I've created these two folders in it

and restarted the deployment 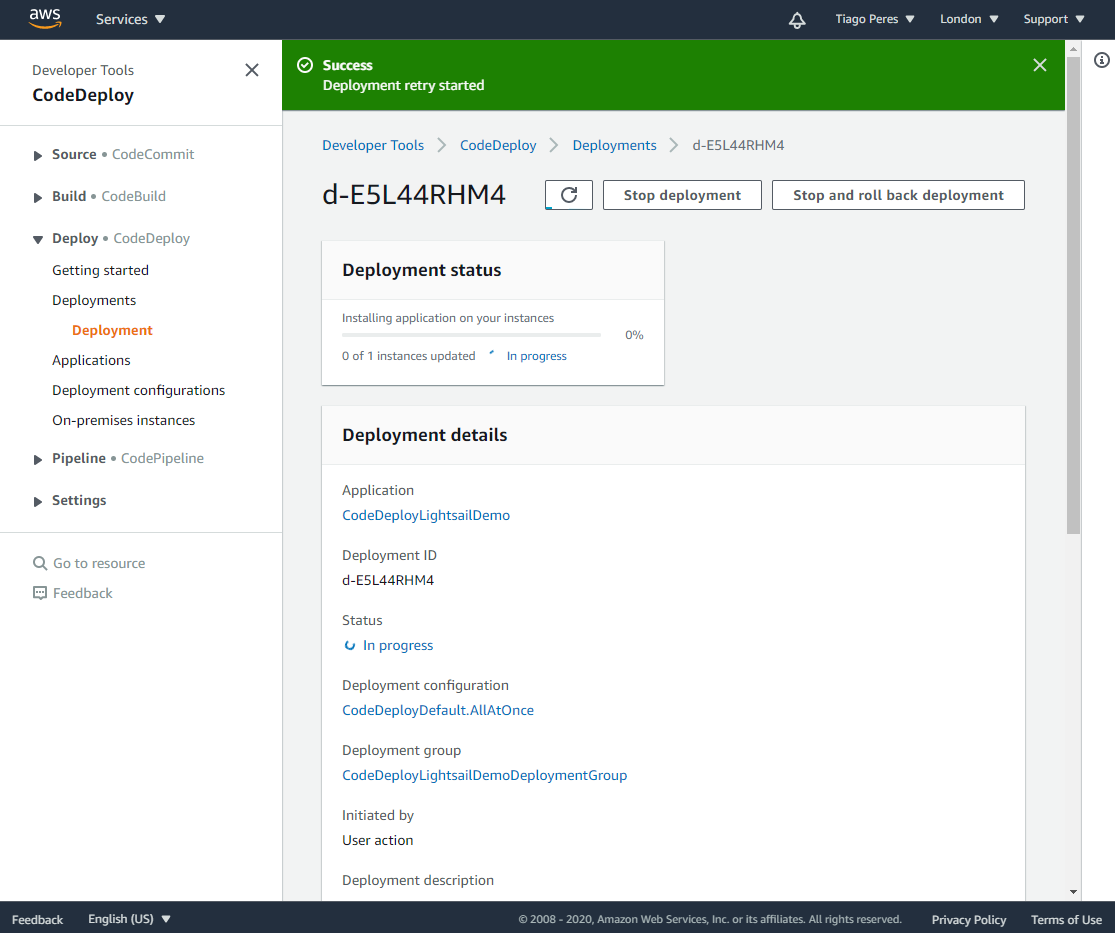 How can I get the Deploy status to succeeded?

According to the documentation, this error code shows HEALTH_CONSTRAINTS. So, I'm now reading:

Based on the comments:

Since the OP is using CodePipline (CP), it was suggest to go one step back and focus on deployment using CodeDeploy (CD) only, without added complexity of using combination of CP + CD. This allows to focus only on CD issues and should simplify finding the root cause of the problems. Once standalone CD deployment works, the next step is to work on incorporating CP in the deployment process, knowing exactly how CD should be setup to work.

More specifically, this is what was done

In the end, got as output 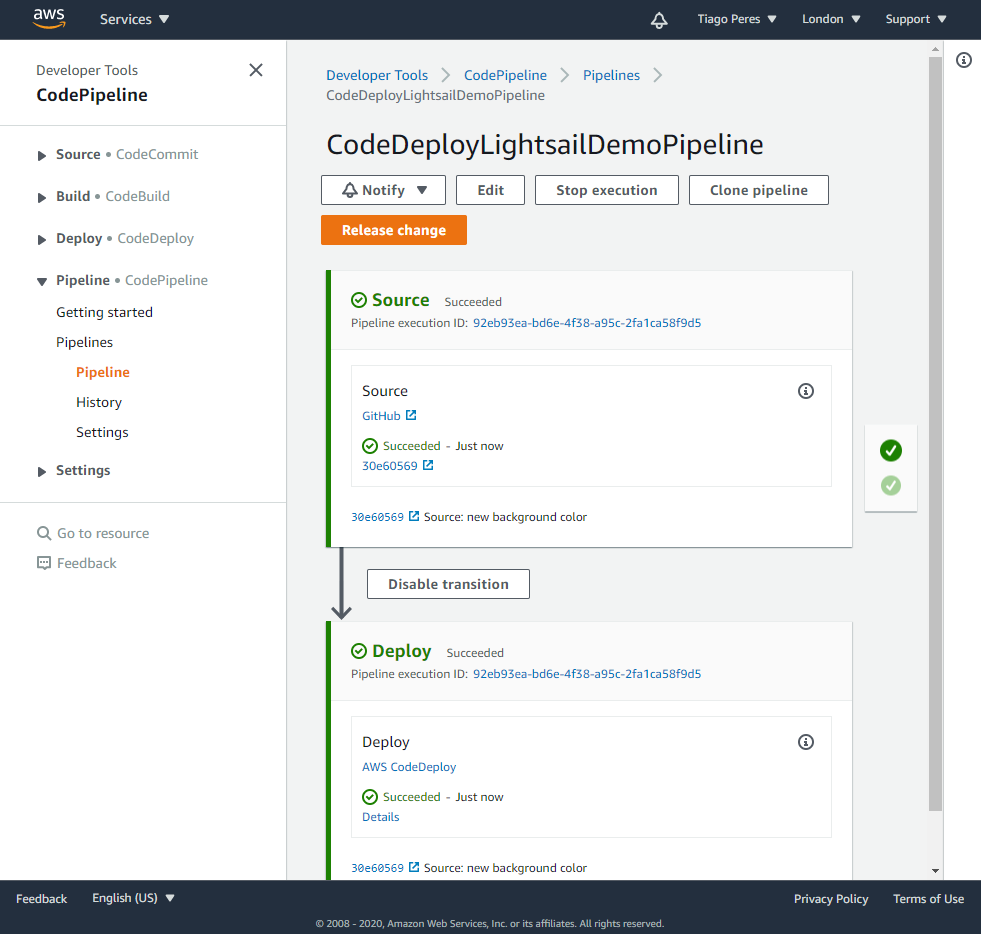 Not the answer you're looking for? Browse other questions tagged amazon-web-services deployment aws-code-deploy amazon-lightsail or ask your own question.