Passing a TForm as an argument to a function

I have an application with several Forms. Two of them are quite similar, they have features in the form of VCL objects (labels, images, etc...) in common, which I named the same. I want to have a function in a specific class which can accept one of these two Form as a parameter in order to modify the parameters that they have in common. The solution I came around does not seem to work.

As my application is quite big and complicated, I replicated the problem using a small example. First, below is an example of my MainForm : 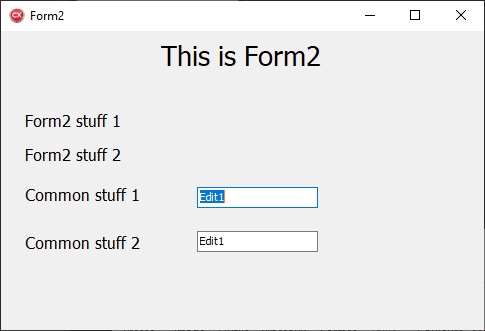 I have an additionnal class which is used to fill in the Edits on the subForms. The code for this class is the following:

And in the MainForm, the code for the "Fill Form2" button is the following:

where Master1 is just an object of the Master class. This works very well for Form2 : 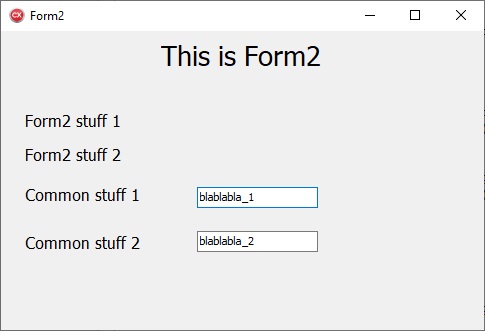 But for Form3, which is filled up using Master1 -> WriteToForm(Form3), here is what I get, which the same pb than in my real application: 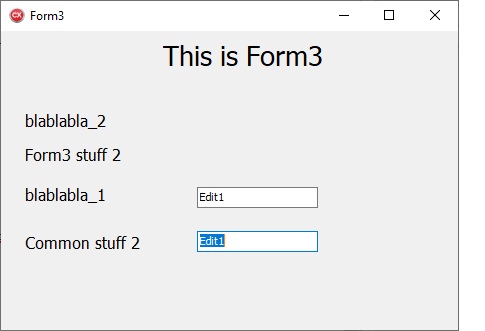 So what should go to the Edit, is misplaced. I think the main pb comes from the fact that I did not create every label, edit, etc... on the same order. I did that on purpose to mimic my real application. To verify this, I created a 3rd subForm, where this time the VCL objects were created in the same order as my first subForm, and this works: 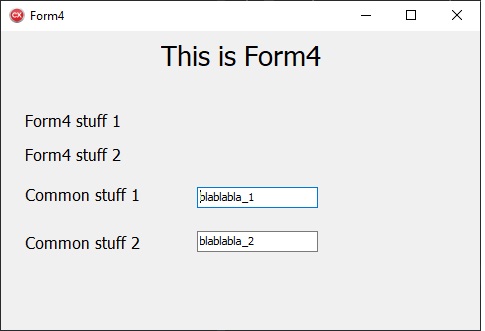 So I would suspect that this comes from the initial cast

When I pass Form3 as an argument, Form3 is somewhat casted into the "shape" of Form2, which is not defined in the same order. Maybe this could be corrected by modifying directly the DFM file, but it is not a realistic approach for my main app.

So, is there a better way to pass the Form as an argument to the WriteToForm function?

Just because two types are similar does not mean they are related. Your code does not work because your two Form classes are not related to each other in any way. You can't just cast one to the other arbitrarily.

To solve this, you have several options:

Not the answer you're looking for? Browse other questions tagged c++ c++builder vcl or ask your own question.

1848
Why can templates only be implemented in the header file?