okay so it is appearing to me my header() isn't doing anything. i tried moving it to the very top of the file instead nothing changed unless I put it in its own but then the rest of the file doesn't run but it does send the header.

EDIT: I updated my code with your suggestions, but it still isn't working correctly. Below is an image of the network tab when I inspect the page. The big thing I notice is the calls are being made but its fetching the same about of data for every image and its a very tiny amount of data. 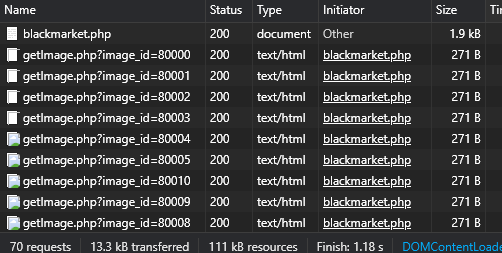 edit: I am getting and Invalid URL Error when I inspect in chrome unless I remove data:image/png;base64,

I can't seem to get this working correctly. The png image should be pulling from the database and then displaying in the HTML. (and yes I know this isn't SQL injection safe) I assume there is some issue with it being called from the loop, but I am unsure. Or that it can't find the getImage.php to use it this way do i need to import it or something earlier in the code? It does correctly pull in the item_id. The result just gives me a broken image box. I know my getImage.php is outputting the correctly formatted image, because I have taken the output directly from there and inserted in place of the call for it and the image has show up. So it tells me this line below is my issue

if I edit as follows it works fine (but obviously it give me the same image for every entry) DBS is the decoded byte string that getImage.php outputs

The browser is responsible for assembling the page, and makes a separate call to the getImage.php script and reads the image data that you are returning.

Return the binary image data directly, along with the size. This might also be part of the problem.

Omit the closing php end tag ?> from this script. PHP best practices is to omit it for all scripts but it is especially important in a script like this that returns binary data, as a bit of whitespace or a UTF-8 BOM character can corrupt your output and is often hard to debug.

You are confusing two things:

In your code, you've mixed the two: you've prefixed a normal URL with data:, so the browser is expecting the data right there in the source code, and never makes a call to getImage.php.

What you need to do instead is make sure that in your getImage.php you

You shouldn't need to set the Content-Length header manually, the server will sort that out just like it would if you were outputting HTML

You can then load that image URL directly in the browser and it should display, no need to even look at your HTML until that part is working right.

Well I finally figured out what was going wrong. In my connect.php I had some white space and that white space was being called before my header so my header wouldn't work

Not the answer you're looking for? Browse other questions tagged php html image http-referer or ask your own question.

2773
How can I prevent SQL injection in PHP?
2639
Deleting an element from an array in PHP
1322
Strange out of memory issue while loading an image to a Bitmap object
1970
How to lazy load images in ListView in Android
1540
startsWith() and endsWith() functions in PHP
2164
How do you parse and process HTML/XML in PHP?
4621
Reference — What does this symbol mean in PHP?
2071
How does PHP 'foreach' actually work?
2544
Why shouldn't I use mysql_* functions in PHP?
106
Cannot display HTML string