How to decompile a whole Jar file? [closed]

Does anyone know of a free decompiler that can decompile an entire Jar file instead of a single class? I have a problem with sub classes like name$1.class name$2.class name.class 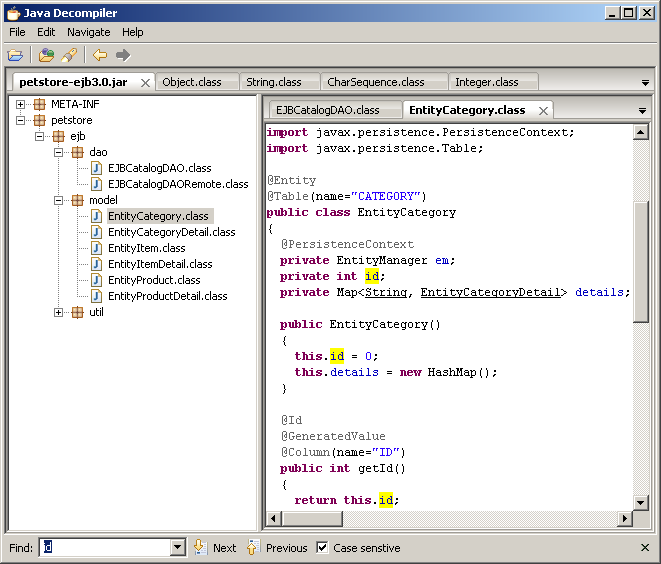 See also the question "How do I “decompile” Java class files?".

The JD-Eclipse doesn't seem to have changed since late 2009 though (see Changes).
So its integration with latest Eclipse (3.8, 4.2+) might be problematic.

Both are the result of the fantastic work of (SO user) Emmanuel Dupuy.

2018: A more modern option, mentioned in the comments by David Kennedy Araujo:

Fernflower is the first actually working analytical decompiler for Java and probably for a high-level programming language in general.

See also How to decompile to java files intellij idea for a command working with recent IntelliJ IDEA.

First of all, it's worth remembering that all Java archive files (.jar/.war/etc...) are all basically just fancy.zip files, with a few added manifests and metadata.

The advantage of all the aforementioned, is that I do not need to hold any other external tool which clutters my work environment. Everything I will ever need from one of those files can be handled inside my IDE or diffed with other files natively.

If you happen to have both a bash shell and jad:

I might be a tiny, tiny bit off with that, but it should work more or less as advertised. You should end up with $JAR.tmp containing your decompiled files.

I have had reasonable success with a tool named (frustratingly) "JD: Java Decompiler".

I have found it better than most decompilers when dealing with classes compiled for Java 5 and higher. Unfortunately, it can still have some hiccups where JAD would normally succeed.

Insert the following into decompile.jar.sh

Ready to use, just type dj your.jar and you will get your.jar.src folder with sources. Use -d option for debug mode.

You extract it and then use jad against the dir.

Note: This solution only works for Mac and *nix users.

I also tried to find Jad with no luck. My quick solution was to download MacJad that contains jad. Once you downloaded it you can find jad in [where-you-downloaded-macjad]/MacJAD/Contents/Resources/jad.

Not the answer you're looking for? Browse other questions tagged java jar decompiler or ask your own question.

8
How do I decompile a .jar file?
22
Where can I find a Java decompiler?
-1
How can I get my source code back after I exported on .JAR file and after that I erased the project from the Workspace?
0
How to make changes to a J2EE application on Glassfish server?
1
How to decompile a .jar file?
556
How do I “decompile” Java class files?
78
How to decompile to java files intellij idea
68
Is Continuous Integration important for a solo developer?
41
Choose and test java decompiler
10
“Can not initialize the default wsdl from…” — Why?
See more linked questions

4324
How do I read / convert an InputStream into a String in Java?
3720
How do I generate random integers within a specific range in Java?
2590
How can I create an executable JAR with dependencies using Maven?
583
How to build jars from IntelliJ properly?
388
Including dependencies in a jar with Maven
3420
How can I create a memory leak in Java?
1116
Can't execute jar- file: “no main manifest attribute”
288
Reading a resource file from within jar
673
How to add local .jar file dependency to build.gradle file?