What is the fastest, easiest tool or method to convert text files between character sets?

Everything goes: one-liners in your favorite scripting language, command-line tools or other utilities for OS, web sites, etc.

On Windows with Powershell (Jay Bazuzi):

(No ISO-8859-15 support though; it says that supported charsets are unicode, utf7, utf8, utf32, ascii, bigendianunicode, default, and oem.)

You don't have to specify either of these arguments. They will default to your current locale, which is usually UTF-8.

If you have vim you can use this:

Not tested for every encoding.

Be aware that this command modify directly the file

Under Linux you can use the very powerful recode command to try and convert between the different charsets as well as any line ending issues. recode -l will show you all of the formats and encodings that the tool can convert between. It is likely to be a VERY long list.

The shortest version, if you can assume that the input BOM is correct:

Also there are iconv-based tools in many languages.

I've put this into .bashrc:

To perform these steps, a sub shell sh is used with -exec, running a one-liner with the -c flag, and passing the filename as the positional argument "$1" with -- {}. In between, the utf-8 output file is temporarily named converted.

Command chcp can be used to change the code page. Code page 65001 is Microsoft name for UTF-8. After setting code page, the output generated by following commands will be of code page set.

Assuming, you don't know the input encoding and still wish to automate most of the conversion, I concluded this one liner from summing up previous answers.

to write properties file (Java) normally I use this in linux (mint and ubuntu distributions):

In my case, in first execution I received this message:

When I installed the first option (gcj-5-jdk) the problem was finished.

I hope this help someone.

Simply change encoding of loaded file in IntelliJ IDEA IDE, on the right of status bar (bottom), where current charset is indicated. It prompts to Reload or Convert, use Convert. Make sure you backed up original file in advance.

File Encoding Checker is a GUI tool that allows you to validate the text encoding of one or more files. The tool can display the encoding for all selected files, or only the files that do not have the encodings you specify.

File Encoding Checker requires .NET 4 or above to run. 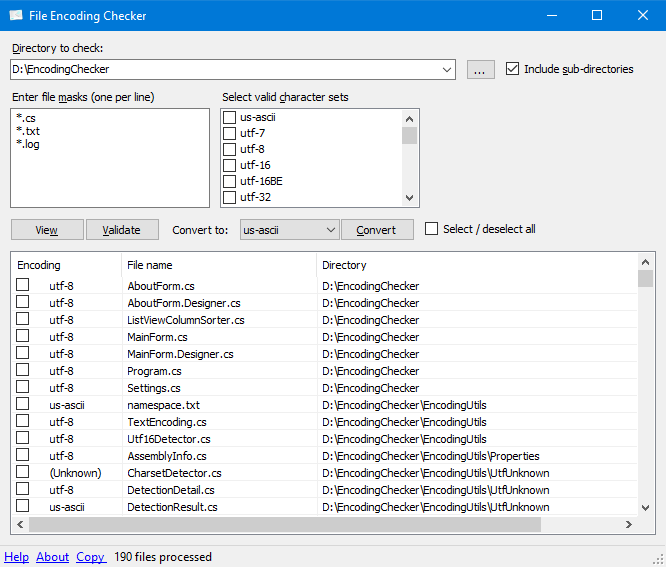 There is also a web tool to convert file encoding: https://webtool.cloud/change-file-encoding

It supports wide range of encodings, including some rare ones, like IBM code page 37.

Use this Python script: https://github.com/goerz/convert_encoding.py Works on any platform. Requires Python 2.7.

My favorite tool for this is Jedit (a java based text editor) which has two very convenient features :

If macOS GUI applications are your bread and butter, SubEthaEdit is the text editor I usually go to for encoding-wrangling — its "conversion preview" allows you to see all invalid characters in the output encoding, and fix/remove them.

And it's open-source now, so yay for them 😉.

NOTE: THIS WILL OVERWRITE YOUR ORGINIAL FILE. MAKE A BACKUP FIRST.

As described on How do I correct the character encoding of a file? Synalyze It! lets you easily convert on OS X between all encodings supported by the ICU library.

Additionally you can display some bytes of a file translated to Unicode from all the encodings to see quickly which is the right one for your file.

Share
Improve this answer
edited May 23, 2017 at 11:47
community wiki
2 revs
pi3
Add a comment  |
Highly active question. Earn 10 reputation (not counting the association bonus) in order to answer this question. The reputation requirement helps protect this question from spam and non-answer activity.

Not the answer you're looking for? Browse other questions tagged text unicode utf-8 character-set or ask your own question.