I have problems on building OpenCV_HighGui220d.lib with QT support. The problems are the unresolved symbols about QMetaObject, such as:

Below are my building steps:
1. use CMake to open C:\OpenCV2.2, check on WITH_QT and WITH_QT_OPENGL, generate vcxproj and sln files.

2. add below macros in cvconfig.h:

3. add window_QT.cpp into opencv_highgui.vcxproj file in VS2010, and add below macros in window_QT.cpp I also tried to replace QT_DLL with QT_NODLL, but did not succeed.

The Qt MOC (meta-object compiler) is not being run on your Qt class files.

Since you're building from the OpenCV release, I'm assuming that the UI classes already have a Q_OBJECT line within the class declaration.

To generate a .vcproj file that has the necessary build instructions to run MOC, run this command:

If that doesn't work, right-click one of the .h files that contains a Qt class. Under Properties->Custom Build Step->General, you should see something like:

if you are building with vs2010, i suggest you should add dir with libraries compiled with vs2010... your path is probably refer to vs2008 libs.

This may help someone:

I encountered this error for a new QOBJECT class I made, and it went away after re-running qmake (Build->Run qmake), then rebuilding.

though very late response.... I followed the following steps to get rid of above error:

FOR existign QT projects..... 1) Open the project from QT menu and not from the File menu of Visual Studio.

I realize this question/answer is a bit old, but I ran into this as an exact hit for the same issue, so it's still around. We had an open source project that was a bit of a hydra; it used both WxWidgets AND QT5 (Open Source). Yet, nothing in it actually ran the moc compiler, so I got the subject error when I attempted to use some thread classes.

IF you install Qt5, this step 'might' be done for you, but I'd tried that and hadn't gotten past the link step. The source I was working with thoughtfully bundled everything with a batch file that would correctly run cmake - just didn't include the MOC. So, to retrofit what I had to do was the following.

The fix for me was: 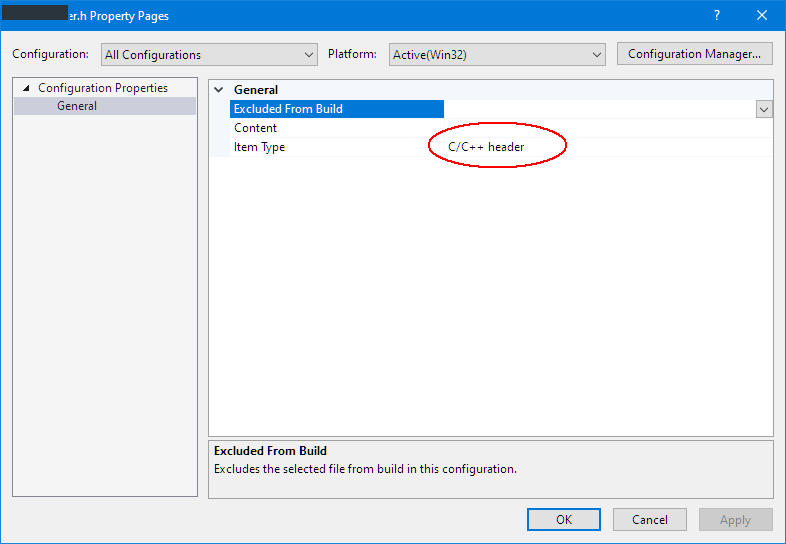 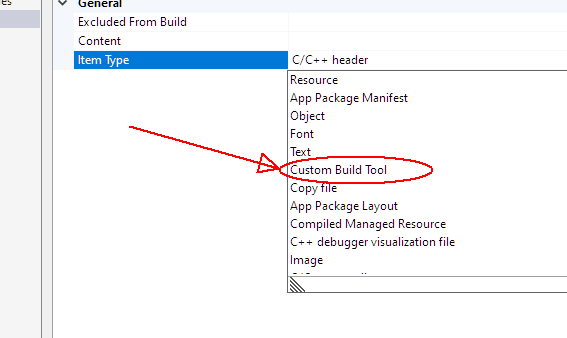 Some nice macros which may be new: $(GeneratedFileExtension) which is .g.cpp; but in practice, it seemed to be empty when the project built. So I typed in .g.cpp manually. %(Identity) %(Filename) but use %(FullFilePath)

@Gnawme's answer got me part of the way there, but $(InputFileName) didn't work for VS2019. (Most likely MS moved forward ...). Also, The moc compliler didn't seem to take -f"filename.h" it just wanted filename.h

So what my final "Command Line" for the custom build step was:

Note if you put quotes around the executable path, you'll get a weird error about invalid characters in the path.

Then you want a description of:

Now ... a tricksy thing I tried; Change "Add Outputs to Item Type" and then "C/C++ Compiler" from the drop down. This means the generated files will automatically be compiled, without having to 'add' them to the project.

.. except it didn't work. Sort of bone headed, but it only has to be done once. The docs actually mention this:

Ah well! It's easy though, the first time you do the build, it'll fail with a linker error, which is your clue to go find the .g.cpp file and add it. I added the ".g" so that it's obvious this is a generated file; if you try to edit file there are copious warnings. Still, that way you could .gitnore stuff, etc. 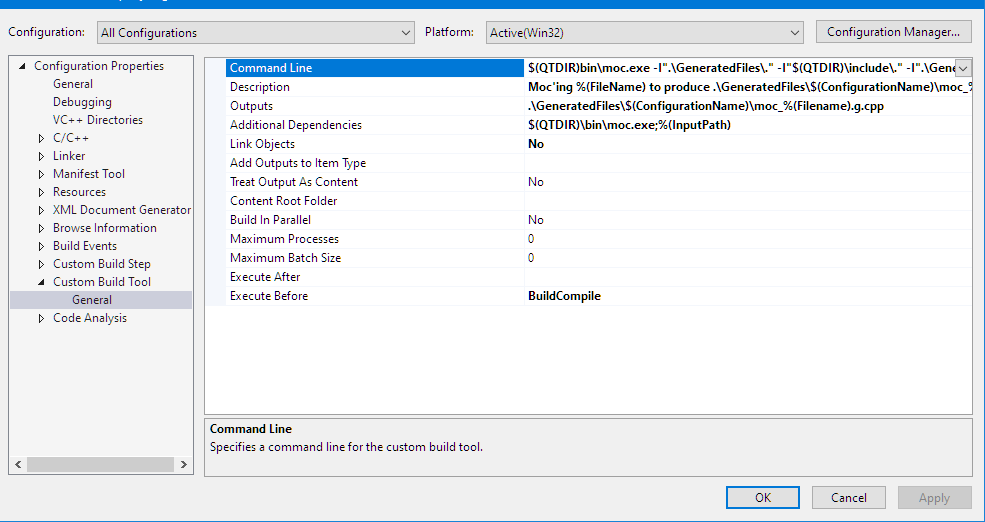 Now you even have a menu item for compiling that specific .h file which in practice seems ... weird. .h files aren't compiled, they are included. Except with Qt.

Not the answer you're looking for? Browse other questions tagged qt opencv or ask your own question.

2
Problems with Qt 4.6 in VS 2008
13
Q_OBJECT linker error!
7
Why does this Simple Qt Application not link
1
Link error while compiling qt example on visual studio
2
Unresolved externals and some warnings while building the qt solution
1
QT: unresolved external symbol while trying to get webpage source code
1
Multilevel inheritance in Qt
2
VS2013 with QT5.3.2 using Websocket and got a unresolved external symbol issue
3
Throwing error when trying to create a new instance of an webserver object in Visual Studio 2013
4
Define a QObject derived class inside an anonymous namespace?