The website GeeksforGeeks has presented a solution for the problem of Maximum path sum for a binary tree. The question is as follows:

Given a binary tree, find the maximum path sum. The path may start and end at any node in the tree.

The core of the solution is as follows:

Res has the following definition:

I am confused about the reasoning behind these lines of code:

I believe the code above follows this logic but I do not understand WHY this logic is correct or valid:

For each node there can be four ways that the max path goes through the node:

An important thing to note is, root of every subtree need to return maximum path sum such that at most one child of root is involved.

Could someone provide an explanation for this step of the solution?

In particular, I do not understand why max_single is being returned in the function findMaxUtil when we the variable res.val contains the answer we are interested in.

The problem is that findMaxUtil() really does two things: it returns largest sum of the tree that it's applied to, and it updates a variable that keeps track of the largest sum yet encountered. There's a comment to that effect in the original code, but you edited it out in your question, perhaps for brevity:

Because Java passes parameters by value, but every object variable in Java implicitly references the actual object, it's easy to miss the fact that the Res that's passed in the res parameter may be changed by this function. And that's exactly what happens in the lines you asked about:

That first line finds the maximum of the node itself or the node plus the greatest subtree, and that result is the max path sum going through root. Returning that value on the last line is one thing that this function does. The second and third lines look at that value and consider whether either it or the path that includes both children is larger than any previously seen path, and if so, it updates res, which is the other thing this function does. Keep in mind that res is some object that exists outside the method, so changes to it persist until the recursion stops and findMaxSum(Node), which started the whole thing, returns the res.val.

So, getting back to the question at the top, the reason that the findMaxUtil returns max_single is that it uses that value to recursively determine the max path through each subtree. The value in res is also updated so that findMaxSum(Node) can use it.

And finally the result is: findmaxUtil(newTree)=max(items 1:6).

Honestly I think the description on that website is very unclear. I'll try to convince you of the reasoning behind the algorithm as best I can.

We have a binary tree, with values at the nodes: 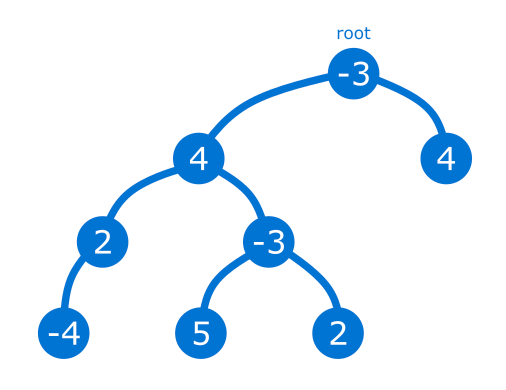 And we are looking for a path in that tree, a chain of connected nodes. 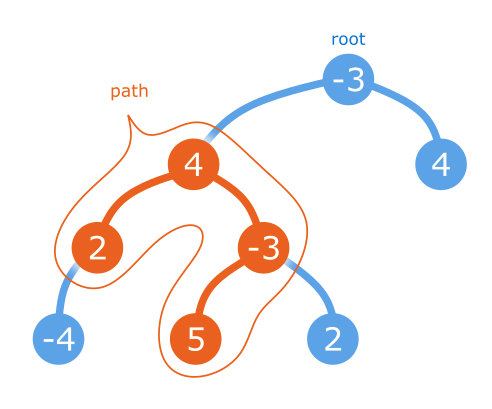 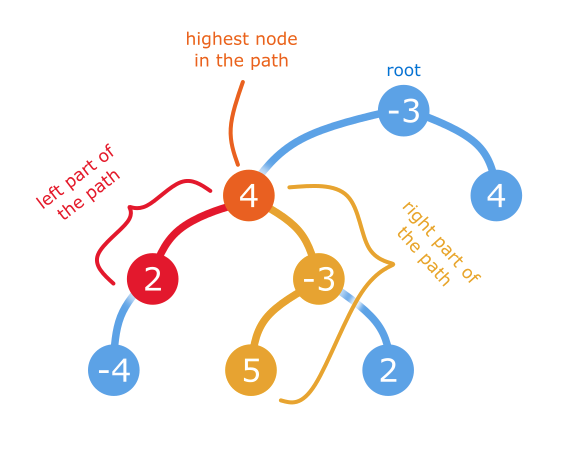 So we have a separate subproblem - given a subtree, what is the value of the maximum value path descending through its root? Well, it might just be the root itself, if all the paths rooted at its children have negative sum, or if it has no children. Otherwise it is the root plus the maximum value descending path of either of those rooted at its children. This subproblem could easily be answered on its own, but to avoid repeated traversals and redoing work we'll combine them both into one traversal of the tree.

Not the answer you're looking for? Browse other questions tagged java algorithm binary-tree or ask your own question.