Suppose three windows in the emacs frame: (1) an R file that defines a function; (2) an R script that calls the function defined in (1); (3): the inferior R ess process. If from (2) I send code to the R interpreter, by default (2) gets replaced by (1) (showing the line to be evaluated, etc). The window showing (3) is left where it originally was; so we actually have the buffer that was in (1) shown twice (at 2 and at 1).

I have an additional configuration (all in the spirit of "do not disrupt my window configuration: I'll tell you in what window to start by issuing M-x R there"):

With this configuration, under debug, window (2) now displays the R session (i.e., the inferior R buffer is shown at the original window location 3, and now at 2 also).

The screenshots below show this issue. The first screenshot with the three windows as described (1, 2, 3, from top to bottom). 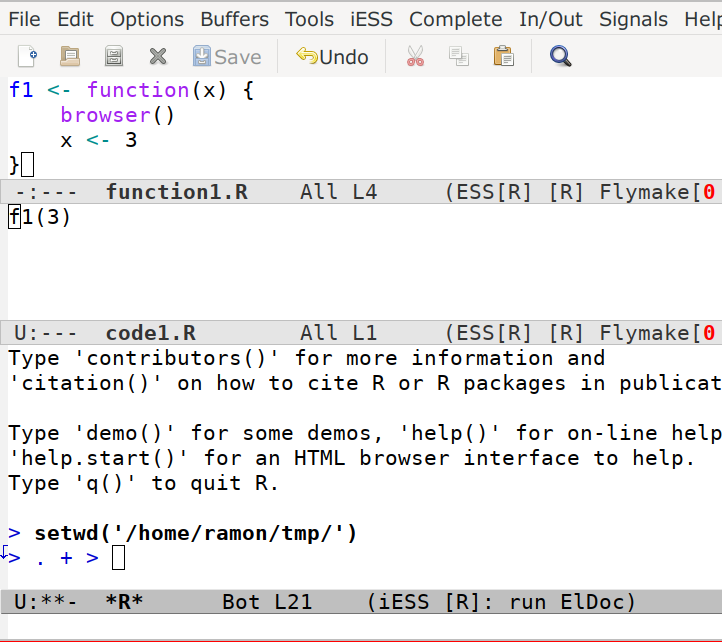 The second screenshot (using the configuration of display-buffer-same-window) immediately after evaluating the function into R (C-c C-f), and then, from (2), evaluating the line (C-c C-n). 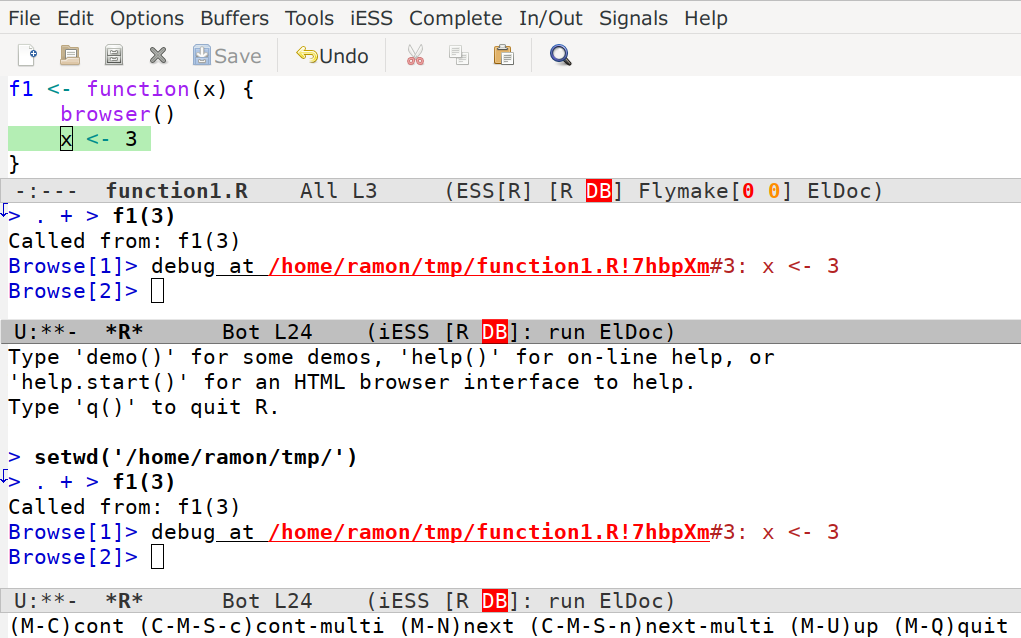 If I disable tracebug, M-x ess-tracebug, no window changes take place, but I do not want to disable following the execution on the window (window 1) that has the code. I would like to use tracebug but avoid any change to my window configuration: just show (1) with the debugging stuff, but leave (2) alone. How can I do that?

No answer, but I concur, I find it infuriating that ess changes the window configuration in an haphazard way, even duplicating buffers in another frame.

Not the answer you're looking for? Browse other questions tagged r emacs ess or ask your own question.

4
How can I make the compilation log create a new window in Emacs?
55
Emacs ESS Mode - Tabbing for Comment Region
56
How to stop emacs from replacing underbar with <- in ess-mode
5
emacs: How to display a buffer without switching window and without raising frames?
7
Emacs auto-complete for ESS in tooltip instead of buffer
3
R console and `didBecomeActive` messages
2
Calling ssh with system in R shell eats subsequent commands
1
Emacs: Why major mode is not set correctly when file is opened?