Are there any good programs out there to compare to compile .NET assemblies?

I know I can use .NET Reflector and use the Assembly Diff plugin. Are there any other good tools out there to do this?

Existing compare tools like Beyond Compare (commercial) can do this by special configuration. Here's how to do this for Beyond Compare:

You can also add syntax highlighting to this new format. I plan to send the syntax file to them so that it'll become available to share.

You could ILDASM and diff with classic tools.

Or you could use NDepends, which will cost for that feature.

I just had to compare two revisions of the same DLL, which had the same version (I needed to implement a small hotfix, and deploy the DLL in production, but I wanted to make sure that no other changes leaked into code). Ideally, I would want the Assemby Diff add-in to show me the difference, but it does not work (it thinks that I'm comparing a DLL to itself). So this is what I did:

It's a bit kludgy, but seems to work. I wish the Assembly Diff add-in worked, though.

UPDATE: The latest version of the Assembly Diff add-in is supposed to fix the issue of comparing two versions of the same assembly. Give it a try.

The tool NDepend offers many features to handle .NET code diff. Disclaimer: I am one of the developer of the tool.

The panel Search by Change is dedicated to browse assemblies code diff. Notice that: 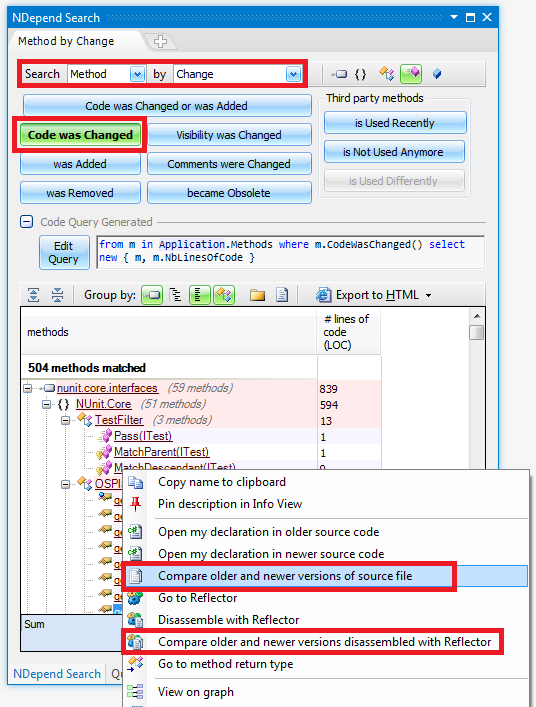 Notice also in the screenshot that a CQLinq code query is generated to browse the diff.

Many others default diff queries and rules are proposed by default, that will let you browse .NET code diff in a smart way.

One more option is LibCheck from Microsoft.

Pretty old console tool for just getting public API diff. I could not run without debugging and retargeting to a more recent .net version. However, it gave me very clear output and I am going to use it later.

Here is an article with screenshots.

Java has a nice one: Semantic Diff Utilities

Not the answer you're looking for? Browse other questions tagged c# .net vb.net debugging reverse-engineering or ask your own question.

786
The located assembly's manifest definition does not match the assembly reference
838
How to enable assembly bind failure logging (Fusion) in .NET
1196
LINQ's Distinct() on a particular property
1716
Proper use of the IDisposable interface
2146
Difference between decimal, float and double in .NET?
535
What 'additional configuration' is necessary to reference a .NET 2.0 mixed mode assembly in a .NET 4.0 project?
432
Could not load file or assembly … An attempt was made to load a program with an incorrect format (System.BadImageFormatException)
789
How to avoid reverse engineering of an APK file?
1474
Why not inherit from List<T>?