Why does C++'s "using namespace" work the way it does?

All students are surprised by the behavior of C++ using-directives. Consider this snippet (Godbolt):

You might think test would call NA's foo(Zoo::Lion); but in fact it ends up calling N1's foo(Zoo::Cat). 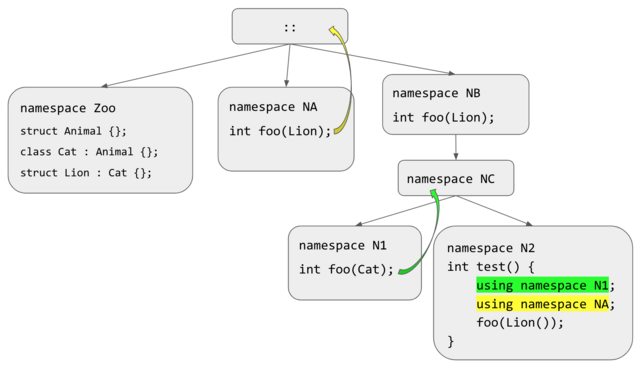 Then normal unqualified lookup "looks up" the tree, in the order testŌĆōN2ŌĆōNCŌĆōNBŌĆō::, stopping as soon as it finds the name foo in NC. The foos higher up the tree, in NB and ::, aren't found by lookup because they've been hidden by the foo in NC.

What considerations went into the choice of this particular mechanism for C++?

I'm looking specifically for references to the design of C++ ŌĆö books, blog posts, WG21 papers, D&E, ARM, reflector discussion, anything of that nature. I am specifically not looking for "opinion-based" answers; I'm looking for the real rationale specified at the time the feature was designed.

(I've read The Design and Evolution of C++ (1994), section 17.4 "Namespaces," but it doesn't even mention this wacky mechanism. D&E says: "A using-directive doesn't introduce names into the local scope; it simply makes the names from the namespace accessible." Which is true, but rather lacking in rationale; I'm hoping Stack Overflow can do better.)

So this difference in scope handling of using-directives compared to using-declarations is to not prevent identical names from being declared. When such name conflict occurs it will be permitted but any ambiguous usage must explicitly specify the intended version.

Not the answer you're looking for? Browse other questions tagged c++ language-lawyer c++98 name-lookup using-directives or ask your own question.

3410
What does the explicit keyword mean?
2080
Why can templates only be implemented in the header file?
1291
Where and why do I have to put the "template" and "typename" keywords?
3120
Why is "using namespace std;" considered bad practice?
1626
Why does changing 0.1f to 0 slow down performance by 10x?
1803
Why should I use a pointer rather than the object itself?
1
How to interpret the rule [namespace.udir]p2 in the c++ standard?
903
Why does C++ code for testing the Collatz conjecture run faster than hand-written assembly?
5
Rationale behind using namespace behavior