Is “ANR” an exception or an error or what?

Is the ANR an exception, an error or what? Can we actually catch it in a try{} catch(){} structure?

ANR (Application Not Responding) is not exactly an error. It is shown when your application is very sluggish and takes a lot of time to respond, thus making the user wait. The user won't appreciate if your application makes them wait for a long time. So, the Android framework gives the user an option of closing your application. http://developer.android.com/guide/practices/design/responsiveness.html

The Application Not Responding (ANR) dialog

As you can imagine, if the main thread is busy with a heavy calculation or reading data from a network socket, it cannot immediately respond to user input such as a tap or swipe.

An application that doesn't respond quickly to user interaction will feel unresponsive—anything more than a couple of hundred milliseconds delay is noticeable. This is such a pernicious problem that the Android platform protects users from applications that do too much on the main thread.

If an app does not respond to user input within fve seconds, the user will see the Application Not Responding (ANR) dialog and will be offered the option to quit the application. 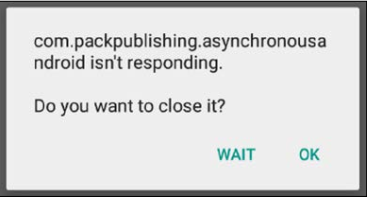 Android works hard to synchronize the user interface redraws with the hardware-refresh rate. This means that it aims to redraw at the rate of 60 frames per second—that's just 16.67 ms per frame. If we do work on the main thread that takes anywhere near 16 ms, we risk affecting the frame rate, resulting in jank—stuttering animations, jerky scrolling, and so on.

Ideally, of course, we don't want to drop a single frame. Jank, unresponsiveness, and especially the ANR, offer a very poor user experience, which translates into bad reviews and unpopular applications. A rule to live by when building Android applications is: do not block the main thread!

Android provides a helpful strict mode setting in Developer Options on each device, which will ﬂash on the screen when applications perform long-running operations on the main thread.

Further protection was added to the platform in Honeycomb (API level 11) with the introduction of a new Exception class, NetworkOnMainThreadException, a subclass of RuntimeException that is thrown if the system detects network activity initiated on the main thread.

Not the answer you're looking for? Browse other questions tagged android exception catch-block android-anr-dialog or ask your own question.

130
Is this the right way to clean-up Fragment back stack when leaving a deeply nested stack?
0
Handler that pauses after every true case in switch statement
1
call webservice and show data on listview

1230
Dealing with “java.lang.OutOfMemoryError: PermGen space” error
2301
Catch multiple exceptions at once?
2098
How do you assert that a certain exception is thrown in JUnit 4 tests?
1456
Proper way to declare custom exceptions in modern Python?
901
How to print an exception in Python?
6030
What is the difference between “px”, “dip”, “dp” and “sp”?
2525
Manually raising (throwing) an exception in Python
912
How to catch and print the full exception traceback without halting/exiting the program?
2517
How to fix 'android.os.NetworkOnMainThreadException'?
3131
Catch multiple exceptions in one line (except block)