Azure (functions) Parameters are declared in Python but not in function.json

I cannot understand what is going on. I literally follow all Microsoft docs and in fact don't even use any of my own scripts/codes. Firstly, I followed their docs to create Python function. It worked. https://docs.microsoft.com/en-us/azure/azure-functions/create-first-function-cli-python?tabs=azure-cli%2Ccmd%2Cbrowser Second docs to connect Azure Functions to Azure Storage using command line tools. Are not reproducible. https://docs.microsoft.com/en-us/azure/azure-functions/functions-add-output-binding-storage-queue-cli?pivots=programming-language-python&tabs=bash%2Cbrowser I literally follow every step, yet receive error.

What is more surprising is that they end up showing me different codes from first article. I tried both versions --none worked.

These are the codes literally from their docs. This is their code for python script (init.py)

And this is JSON function code:

Since they didn't post full version of code I added stuff like brackets. If you want docs citation that's what they say:

Although a function can have only one trigger, it can have multiple input and output bindings, which let you connect to other Azure services and resources without writing custom integration code. You declare these bindings in the function.json file in your function folder. From the previous quickstart, your function.json file in the HttpExample folder contains two bindings in the bindings collection:

Each binding has at least a type, a direction, and a name. In the example above, the first binding is of type httpTrigger with the direction in. For the in direction, name specifies the name of an input parameter that's sent to the function when invoked by the trigger.

The second binding in the collection is of type http with the direction out, in which case the special name of $return indicates that this binding uses the function's return value rather than providing an input parameter.

To write to an Azure Storage queue from this function, add an out binding of type queue with the name msg, as shown in the code below:

In this case, msg is given to the function as an output argument. For a queue type, you must also specify the name of the queue in queueName and provide the name of the Azure Storage connection (from local.settings.json) in connection.

So even though this code was posted in docs it doesn't seem to work properly. OR their python code is not working. I don't know.

I tried to just follow their steps. I also tried to copy-paste their new version of code (that varied a little from original) But nothing works I still get this error (I changed few elements that I suspect to be sensitive)

I really cannot understand how their own code doesn't work. All I wanted to do is to learn how to deploy my python scripts to Azure, I didn't expect it to be such a big challenge.

This is how my updated python init.py code looks like after example answer:

This is how updated function.json code looks like after example answer: 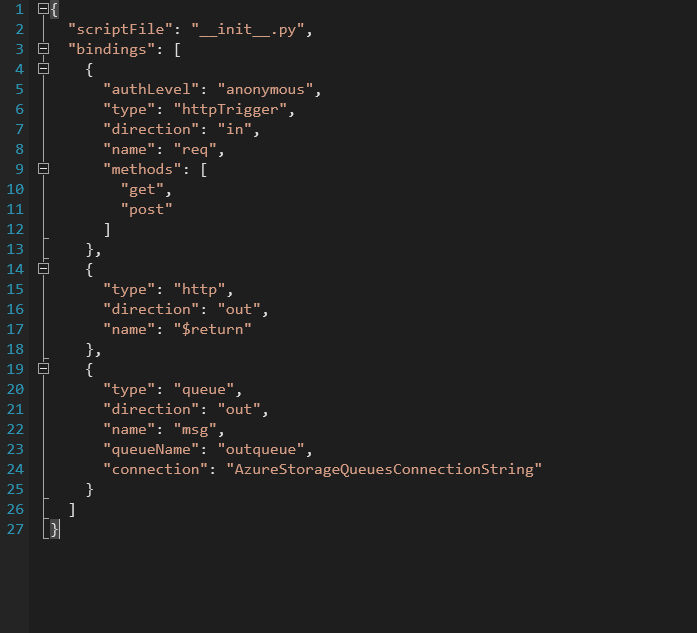 This is how location.setting looks like (with sensitive info changed) 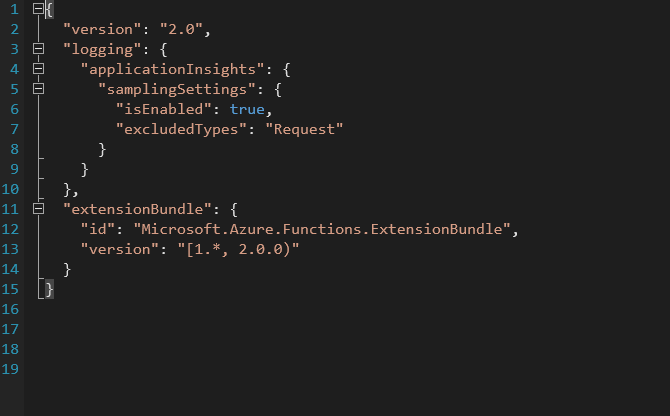 Try below and it will works fine:

Not the answer you're looking for? Browse other questions tagged python azure azure-functions or ask your own question.

5466
How do I merge two dictionaries in a single expression (taking union of dictionaries)?
6068
What are metaclasses in Python?
6499
Does Python have a ternary conditional operator?
3156
How to get the current time in Python
3306
Using global variables in a function
2855
How to make function decorators and chain them together?
2835
How do I concatenate two lists in Python?
2463
Manually raising (throwing) an exception in Python
3596
Does Python have a string 'contains' substring method?