Can git ignore a specific line?

I'm using git to sync to phonegap while testing on the phone's native browser. As such I have the following line:

Obviously I change this when building, but is there any way I can set up git to ignore this one line or do I have to go and put it in its own file and ignore it that way?

If your file is of a specific type, you can declare a content filter driver, that you can declare in a .gitattributes file (as presented in the "Keyword expansion" of "Git Attributes"): 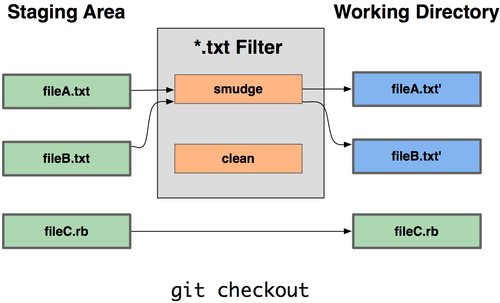 (you can even set that filter for a specific file, if you want)

Your file would appear unchanged on git status, yet its checked out version would have the right value for isPhoneGap.

Note: in the comments, ohaal and Roald suggest to isolate the sed calls in a separate helper.sh script:

to ignore the changes of one file that you don't want track. I use this solution when I need to have a file in the repository but this file have some parts that change that I don't need track always.

When the file have changes that are important you have to do this:

When these flags are specified, the object names recorded for the paths are not updated. Instead, these options set and unset the "assume unchanged" bit for the paths. When the "assume unchanged" bit is on, git stops checking the working tree files for possible modifications, so you need to manually unset the bit to tell git when you change the working tree file.

Gitx should let you commit or ignore individual lines (you may know that already), but you'd have to do that every time you commit. I think it would be better to have a config file per deployment target (you can version those), and some runtime parameter for however you are starting the server (like ./myserver --config=whatever.js).

Continuing https://stackoverflow.com/a/20574486/4935114, @Mike proposed to create a pre-commit hook which will grep in the staged files for the lines which one might want to ignore. The hook checks if those lines were staged. If so, it echos a warning and it exit's with code 1 so the commit process won't continue.

Inspired by @Mike's answer, I found myself using perhaps an improved version of his hook which automatically resets (with the -p flag) the specific line which we want to ignore.

I'm not sure this hook will work for a situation where you have many files with this line to be ignored, but this pre-commit hook looks for a changed in this line in a specific file buildVars.java. The hook script looked like this when I tested it on my machine.

What I did was echoing a control sequences which searches for the regex isPhoneGap during an interactive reset process. Thus emulating a user who presses / to search for isPhoneGap, presses y when asked if he wants to discard this patch and finally presses q to exit the interactive reset.

NOTE: The above script assuming that the variable interactive.singleKey is false. If you configured yours to true, remove any $'\n' from the echo command right after the warning.

This is how you can kind of do it with git filters:

Notes:
Of course, this is for ruby files, applied when a line ends with #gitignore, applied globally in ~/.gitconfig. Modify this however you need for your purposes.

Warning!!
This leaves your working file different from the repo (of course). Any checking out or rebasing will mean these lines will be lost! This trick may seem useless since these lines are repeatedly lost on check out, rebase, or pull, but I've a specific use case in order to make use of it.

Just git stash save "proj1-debug" while the filter is inactive (just temporarily disable it in gitconfig or something). This way, my debug code can always be git stash apply'd to my code at any time without fear of these lines ever being accidentally committed.

I have a possible idea for dealing with these problems, but I'll try implementing it some other time.

Thanks to Rudi and jw013 for mentioning git filters and gitattributes.

A content filter driver is not a good solution. You may be able to hide this line from git status/etc but it's not really being ignored. As soon as you change the value, your working directory will be marked dirty even though the change may not be visible.

If you really want this line out of version control, changing it to a command line argument or placing it in an ignored include or build file may be the only practical means.

I'm guessing this might be something that comes up in more than one line of your source.

I think it would be cleanest to have a .userbuildconfig file of some sort that you just include and have the defaults checked in. Then you can use Carlos's suggestion to mark that file alone as assume unchanged. This way other changes to the file where you need to check the setting are not missed.

This can allow you to tune preprocessor macros locally (Or for java something like this https://stackoverflow.com/a/1813873/1270965).

I think nobody has provided this way to work around the problem so, here's my technique. I keep logging/debugging/etc stuff in a single revision (actually, it could be multiple) in a private branch in my local repo. So, when I start a feature branch and I want to have all of my goodies (in my-goodies branch), I just do this:

Now I start working on the feature. When I am done, I rewrite history of the feature branch so that those revisions are gone:

Now my branch is clean from all my goodies and I am fine to push anywhere.

Nope. You can only ignore individual files (and more) since the lines in .gitignore matches file names and not file content. You have already mentioned the solution to this, i.e. ignore a single file that contains that content you want to ignore.

Not the answer you're looking for? Browse other questions tagged git gitx or ask your own question.

214
How to tell git to ignore individual lines, i.e. gitignore for specific lines of code
3
Can git ignore specific commented debug code?
0
How to add tracked files to gitignore
1
How to have comments appearing in file only locally but not remotely (when pushing)?
0
How to prevent some lines from going upstream
215
Can git automatically switch between spaces and tabs?
109
#ifdef #ifndef in Java
9
git update-index --assume-unchanged not working for me
11
Preventing gradle-wrapper.properties from changing all the time
4
is there any way how to tell git to ignore certain lines of a file?
See more linked questions