Someone told me it's more efficient to use StringBuffer to concatenate strings in Java than to use the + operator for Strings. What happens under the hood when you do that? What does StringBuffer do differently?

It's better to use StringBuilder (it's an unsynchronized version; when do you build strings in parallel?) these days, in almost every case, but here's what happens:

When you use + with two strings, it compiles code like this:

Therefore for just little examples, it usually doesn't make a difference. But when you're building a complex string, you've often got a lot more to deal with than this; for example, you might be using many different appending statements, or a loop like this:

It is rather pointless to use StringBuffer - as jodonnell pointed out it will be smartly translated into:

BUT it is very unperformant to concatenate strings in a loop, like:

Actually for the example above you should use StringBuilder (introduced in Java 1.5) instead of StringBuffer - StringBuffer is little heavier as all its methods are synchronized.

One shouldn't be faster than the other. This wasn't true before Java 1.4.2, because when concatenating more than two strings using the "+" operator, intermediate String objects would be created during the process of building the final string.

However, as the JavaDoc for StringBuffer states, at least since Java 1.4.2 using the "+" operator compiles down to creating a StringBuffer and append()ing the many strings to it. So no difference, apparently.

However, be careful when using adding a string to another inside a loop! For example:

Keep in mind, however, that usually concatenating a few strings with "+" is cleaner than append()ing them all.

Under the hood, it actually creates and appends to a StringBuffer, calling toString() on the result. So it actually doesn't matter which you use anymore.

That's true for a bunch of inlined appends within a single statement. If you build your string over the course of multiple statements, then you're wasting memory and a StringBuffer or StringBuilder is your better choice.

I think that given jdk1.5 (or greater) and your concatenation is thread-safe you should use StringBuilder instead of StringBuffer http://java4ever.blogspot.com/2007/03/string-vs-stringbuffer-vs-stringbuilder.html As for the gains in speed: http://www.about280.com/stringtest.html

Personally I'd code for readability, so unless you find that string concatenation makes your code considerably slower, stay with whichever method makes your code more readable.

In some cases this is obsolete due to optimisations performed by the compiler, but the general issue is that code like:

will act as below (each step being the next loop iteration):

As you can see, each iteration is having to copy one more character, resulting in us performing 1+2+3+4+5+...+N operations each loop. This is an O(n^2) operation. If however we knew in advance that we only needed N characters, we could do it in a single allocation, with copy of just N characters from the strings we were using - a mere O(n) operation.

StringBuffer/StringBuilder avoid this because they are mutable, and so do not need to keep copying the same data over and over (so long as there is space to copy into in their internal buffer). They avoid performing an allocation and copy proportional to the number of appends done by over-allocing their buffer by a proportion of its current size, giving amortized O(1) appending.

However its worth noting that often the compiler will be able to optimise code into StringBuilder style (or better - since it can perform constant folding etc.) automatically.

However, in Java 1.4 and earlier, it would do this for each + operator in the statement separately. This meant that doing a + b + c would result in two StringBuffer constructs with two toString() calls. If you had a long string of concats, it would turn into a real mess. Doing it yourself meant you could control this and do it properly.

Java 5.0 and above seem to do it more sensibly, so it's less of a problem and is certainly less verbose.

AFAIK it depends on version of JVM, in versions prior to 1.5 using "+" or "+=" actually copied the whole string every time.

Beware that using += actually allocates the new copy of string.

As was pointed using + in loops involves copying.

When strings that are conactenated are compile time constants there concatenated at compile time, so

Has is compiled to:

The StringBuffer class maintains an array of characters to hold the contents of the strings you concatenate, whereas the + method creates a new string each time its called and appends the two parameters (param1 + param2).

The StringBuffer is faster because 1. it might be able to use its already existing array to concat/store all of the strings. 2. even if they don't fit in the array, its faster to allocate a larger backing array then to generate new String objects for each evocation.

StringBuffer is a thread-safe class

StringBuffer is mutable. It adds the value of the string to the same object without instantiating another object. Doing something like:

will create a new String object.

To concatenate two strings using '+', a new string needs to be allocated with space for both strings, and then the data copied over from both strings. A StringBuffer is optimized for concatenating, and allocates more space than needed initially. When you concatenate a new string, in most cases, the characters can simply be copied to the end of the existing string buffer.
For concatenating two strings, the '+' operator will probably have less overhead, but as you concatenate more strings, the StringBuffer will come out ahead, using fewer memory allocations, and less copying of data.

Because Strings are immutable, each call to the + operator creates a new String object and copies the String data over to the new String. Since copying a String takes time linear in the length of the String, a sequence of N calls to the + operator results in O(N2) running time (quadratic).

Conversely, since a StringBuffer is mutable, it does not need to copy the String every time you perform an Append(), so a sequence of N Append() calls takes O(N) time (linear). This only makes a significant difference in runtime if you are appending a large number of Strings together.

As said, the String object is ummutable, meaning once it is created (see below) it cannot be changed.

So when you attempt to concanate String objects, the value of those objects are taken and put into a new String object.

If you instead use the StringBuffer, which IS mutable, you continually add the values to an internal list of char (primitives), which can be extended or truncated to fit the value needed. No new objects are created, only new char's are created/removed when needed to hold the values.

When you concatenate two strings, you actually create a third String object in Java. Using StringBuffer (or StringBuilder in Java 5/6), is faster because it uses an internal array of chars to store the string, and when you use one of its add(...) methods, it doesn't create a new String object. Instead, StringBuffer/Buider appends the internal array.

The reason is the String immutable. Instead of modifying a string, It creates a new one. String pool stores all String values until garbage collectors plush it. Think about two strings are there as Hello and how are you. If we consider the String pool, It has two String. 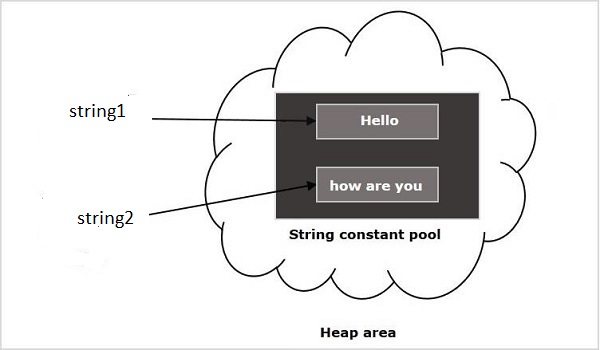 If you try to concatenate these two string as,

Now create a new String object and store it in the String pool. 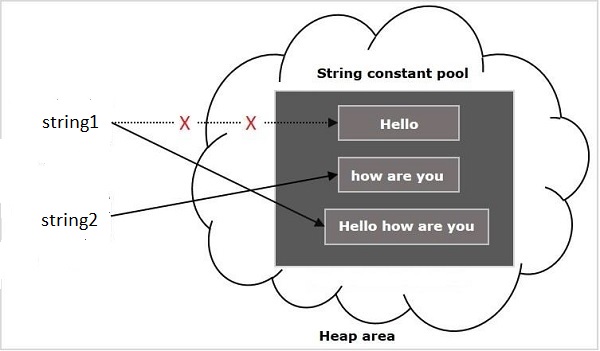 Because Strings are imutable in Java, every time you concanate a String, new object is created in memory. SpringBuffer use the same object in memory.

I think the simplest answer is: it's faster.

If you really want to know all the under-the-hood stuff, you could always have a look at the source yourself:

The section String Concatenation Operator + of the Java Language Specification gives you some more background information on why the + operator can be so slow.

0
Why use append() instead of +
1
what is the significance of StringBuffer and which should be used more often, StringBuffer or StringBuilder?
6
Java input = "" isn't the same as input = null?
2
Move Uppercase alphabets to the end of string
5
Formatted printing in Java
1
Trouble determining most efficient string concatenation
2
Using .append(string1 + string 2) vs .append(string1).append(string2)
0
Slow XML response in Java Servlet with MySQL connector
0
Is this JDBC code prone to leaking?
2
Java threading memory leak
See more linked questions

4101
What are the differences between a HashMap and a Hashtable in Java?
3703
How do I efficiently iterate over each entry in a Java Map?
544
String concatenation: concat() vs "+" operator
3253
What is a serialVersionUID and why should I use it?
4466
How do I read / convert an InputStream into a String in Java?
3420
When to use LinkedList over ArrayList in Java?
3181
Improve INSERT-per-second performance of SQLite
3325
How do I convert a String to an int in Java?
3682
Why is char[] preferred over String for passwords?
26163
Why is processing a sorted array faster than processing an unsorted array?