How to raise PR request to approve without merging code changes into parent branch?

As per scenario, we need a PR review for branch(b), but we donot want to merge the code changes of branch(b) to parent branch(master).

Because, we want to create another(second) PR in future for same branch(b) and then merge code changes of branch(b) in parent branch(master)

Is this possible from GitHub?

Draft PR functionality offered by Github, serves exactly this purpose. You can create a Draft PR, get it reviewed, if required, and continue to work on it until it is ready to be merged. Draft PRs won't be allowed to be merged until you convert the Draft PR into a PR.

It's possible to change any Draft PR into a PR and vice versa. 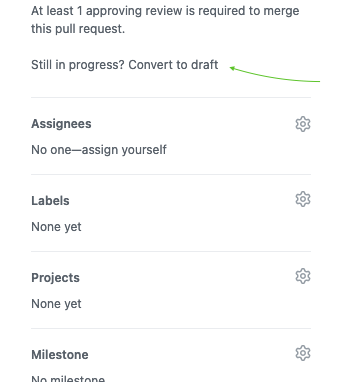 You would easily find out how to do the next one.

Suppose you have worked on a branch b, committed it, pushed it to the remote repo, created a PR for merging it to the master, and waiting for the approval.

Now, you made changes to the branch in local and then pushed it in the same remote branch forcefully. It is up to you whether you want to have one commit or two commits. If you want to do one commit then you need to use the following command.

Pushing the same branch to the remote can be done by using -f flag.

There is another scenario when you have pushed the branch to remote and created a PR and this time you are not the one who is making changes, another member of your team is making changes to the same branch. This is possible. So, the below step would help you for the same.

First, the member of your team (say B) would pull your remote branch(branch-b) to local.

Now after git status it will show as

It will show us Branch 'onhold' set up to track remote branch 'master' from 'origin'.

Now B will do some changes and will push to the same remote branch forcefully by the below command.

Now the PR will show us that team member B has removed one commit and added one commit. This PR is ready to merge with the origin/master once the PR gets approved.🎉🎉

1540
How can I selectively merge or pick changes from another branch in Git?
7953
How do I force “git pull” to overwrite local files?
1486
How to get just one file from another branch
1809
Make the current Git branch a master branch
1741
How to compare files from two different branches?
2317
What is the best (and safest) way to merge a Git branch into master?
2143
How can I delete all Git branches which have been merged?
1458
Remove tracking branches no longer on remote
2533
Git fetch remote branch
1255
Git merge hotfix branch into feature branch