I am using Ubuntu on WSL2 (not on Docker Desktop).

instead of just starting it again at every boot with

with both commands avoiding "Cannot connect to the Docker daemon at unix:///var/run/docker.sock. Is the docker daemon running?".

When using any of the two, I get

and a test run shows, that docker is not yet running:

Some steps before, I also got a different message at this point:

System has not been booted with systemd as init system (PID 1). Can't operate.Failed to connect to bus: Host is down"

which brought me to Fixing "System has not been booted with systemd as init system" Error:

Reason: Your Linux system is not using systemd How to know which init system you are using? You may use this command to know the process name associated with PID 1 (the first process that runs on your system):

It should show systemd or sysv (or something like that) in the output.

According to this and this table 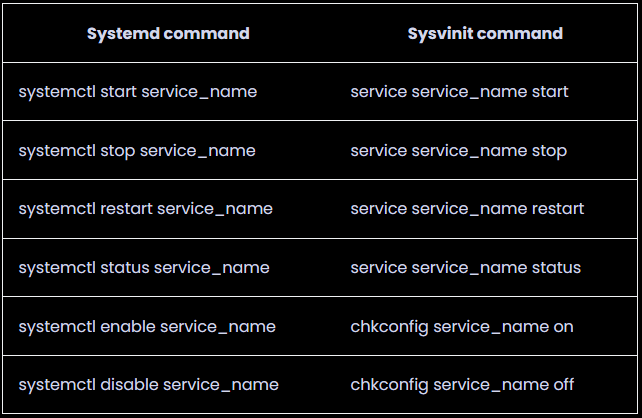 I can choose service docker start to run docker, which works. But I cannot find something like "systemd"'s sudo systemctl enable docker for "sysvinit". I would expect it to be like:

But that "enable" is not available for "sysvinit" / "init".

What is the command that reaches sudo systemctl enable docker using sudo service docker ..., or if that does not exist, what is a workaround here to automatically start docker when opening Ubuntu on WSL2?

Important note: Most users should read my updated answer first. This answer is a bit outdated, but I'm leaving it here in case it's beneficial to anyone running on an older WSL release.

Short answer to "what is a workaround here to automatically start docker when opening Ubuntu on WSL2?

As you've discovered, WSL does not include any systemd support, nor really any direct support for starting a service on boot.

For starters, the WSL subsystem doesn't launch at Windows boot, but only when the user launches a login session anyway. So without any real "system start", the init.d or systemd startup doesn't make as much sense.

Further, users may have multiple WSL instances/distributions running, and if you are doing that (as I am), then you really don't want all services from all instances running on every boot (although, updated answer, Windows 11 does now give us this option).

For Docker, though, are you running Docker Desktop with WSL2 integration, or just installed directly into a WSL2 instance? For Docker Desktop, I ran across this in another question yesterday on how to start Docker Desktop daemon at Windows boot.

You can also have the WSL2 instance start via Windows Task Manager when the user logs in, and run the script via something like wsl -u root service docker start in the Task Manager.

Note that the same doesn't seem to work at Windows boot, however, (only login) because Windows seems to terminate any WSL instance that isn't tied to an active user after a few seconds (even if a service is running in the background). You can work around this with the PowerShell Invoke-WmiMethod, something like ...

powershell.exe Invoke-WmiMethod -Class Win32_Process -Name Create -ArgumentList 'wsl', although I haven't tested this all that thoroughly.

This answer requires the latest version of Windows and WSL at the time of this posting, and it now works under both Windows 10 and 11. Run wsl --version and confirm that you are on WSL 1.0.0 (not to be confused with WSL1) or later.

If you are on an older release of Windows or WSL, then wsl --version will likely just show the Help text. See this answer for information on how to upgrade.

If you cannot upgrade at this time, then please see my original answer for a workaround for Windows 10.

what is a workaround here to automatically start docker when opening Ubuntu on WSL2?

Important Note: If you run a service (e.g. cron or docker) using either of these methods, please note that the WSL distribution will still auto-terminate when the last process that was started interactively completes. You can see more discussion (and a workaround using keychain) for this in my answer to the Ask Ubuntu question Is it possible to run a WSL app in the background?.

This worked for WSL ubuntu.

-3
Installing docker on WSL 2 Windows - Ubuntu 20.04.4 LTS(focal)
305
WSL Redis encountered System has not been booted with systemd as init system (PID 1). Can't operate
45
How to start Docker daemon (windows service) at startup without the need to log-in?
37
Difference between "WSL2+docker desktop windows" and directly install docker on the WSL2 distro?
11
How to restart Docker Desktop after shutting down WSL?
8
Enable Systemd in WSL 2
2
What is the entry point for WSL 1?
1
How to run a command on WSL startup using WSL config files?