To understand the text in the JLS better I'm also reading The Java Memory Model by Jeremy Manson (one of creators of the JMM).

The paper contains the example that got me interested: if an object o with final fields is made visible to another thread t twice:

then t can see semi-constructed o even when it is accessed only via a "properly" published path.

Here is the part from the paper:

f1 is a final field; its default value is 0

Consider Figure 7.3. We will not start out with the complications of multiple writes to final fields; a freeze, for the moment, is simply what happens at the end of a constructor. Although r1, r2 and r3 can see the value null, we will not concern ourselves with that; that just leads to a null pointer exception.

What about the read of q.f1 in Thread 2? Is that guaranteed to see the correct value for the final field? A compiler could determine that p and q point to the same object, and therefore reuse the same value for both p.f1 and q.f1 for that thread. We want to allow the compiler to remove redundant reads of final fields wherever possible, so we allow k to see the value 0.

One way to conceptualize this is by thinking of an object being “tainted’ for a thread if that thread reads an incorrectly published reference to the object. If an object is tainted for a thread, the thread is never guaranteed to see the object’s correctly constructed final fields. More generally, if a thread t reads an incorrectly published reference to an object o, thread t forever sees a tainted version of o without any guarantees of seeing the correct value for the final fields of o.

I tried to find in the current JLS anything that explicitly allows or forbids such behavior, but all I found is that:

Is such behavior allowed in the current JLS?

Yes, it is allowed.

Mainly exposed on the already quoted sections of the JMM:

What does it mean for an object to be properly constructed? It simply means that no reference to the object being constructed is allowed to "escape" during construction.

In other words, do not place a reference to the object being constructed anywhere where another thread might be able to see it; do not assign it to a static field, do not register it as a listener with any other object, and so on. These tasks should be done after the constructor completes, not in the constructor** *

So yes, it's possible, as far as is allowed. Last paragraph is full of suggestions of how-not-to-do things; Whenever someone says avoid doing X, then is implicit that X can be done.

The other answers correctly point out the requirements for the final fields to be correctly seen by other threads, such as the freeze at the end of the constructor, the chain, and so on. These answers offer a deeper understanding of the main issue and should be read first. This one focuses on a possible exception to these rules.

The most repeated rule/phrase may be this one here, copied from Eugene's answer (which shouldn't have any negative vote btw):

Note that I changed the term "initialized" with the equivalent terms assigned, loaded, or set. This is in purpose, as the terminology may mislead my point here.

The "final freeze" happens at the end of the constructor, and from that point on all reads are guaranteed to be accurate.

But, do you think reflection gives a f*** about this? No, of course not. It didn't even read that paragraph.

These statements are not only correct, but also backed by the JLS. I don't intend to refute them, but just add some little extra information regarding an exception to this law: reflection. That mechanism that, among other things, can change a final field's value after being initialized.

Reflective operations on final fields "break" the rule: after the constructor being properly finished, all reads of the final fields are still NOT guaranteed to be accurate. I'd try to explain.

Let's imagine all the proper flow has been honored, the constructor's been initialized and all final fields from an instance are correctly seen by a thread. Now it's time to make some changes on those fields via reflection (just imagine this is needed, even if unusual, I know..).

The previous rules are followed and all threads wait until all fields have been updated: just as with the usual constructor scenario, the fields are only accessed after being freezed and the reflective operation been correctly finished. This is where the law is broken:

This is telling: even if all rules were followed, your code won't correctly read the final field's assigned value, if that variable is a primitive or String and you initialized it as a constant expression in the fields declaration. Why? Because that variable is just a hardcoded value for your compiler, which won't ever check again that field nor its changes, even if your code properly updated the value in runtime execution.

The final int i was correctly updated at runtime, and to check it, you could debug and inspect the object's fields values:

Both i and l were correctly updated. So what's happening with i, why is still showing 5? Because as stated on the JLS, the field i is replaced directly at compile time with the value of the constant expression, which in this case, is 5.

Every consequent read of the final field i will then be INCORRECT, even if all previous rules were followed. The compiler will never check again that field: When you code f.i, it won't access any variable of any instance. It will just return 5: the final field is just hardcoded at compile-time and if an update is made on it on runtime, it will never, ever be correctly seen again by any thread. This breaks the law.

As proof of the correct update of the fields at runtime: 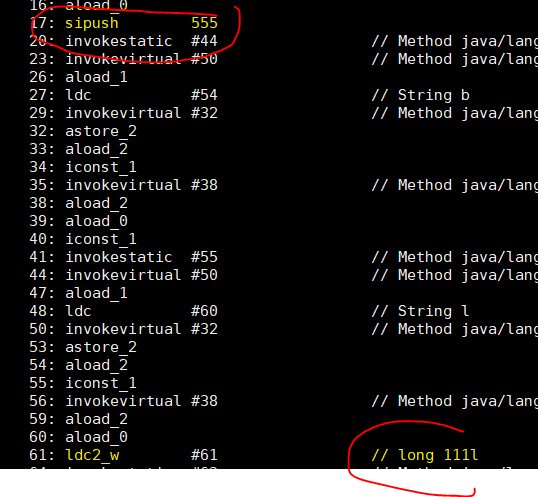 Both 555 and 111L are pushed into the stack and the fields get their newly assigned values. But what happens when manipulating them, such as printing their value? 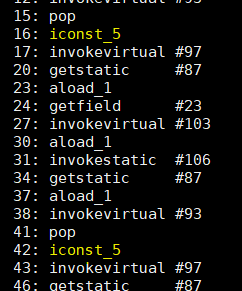 No field access, but just a "yeah that's 5 for sure, return it". This implies that a final field is not ALWAYS guaranteed to be correctly seen from outer threads, even if all protocols were followed.

This affects primitives and Strings. I know it's an unusual scenario, but it's still a possible one.

Some other problematic scenarios (some also related to the synchronize issue quoted on the comments):

1- If not correctly synchronized with the reflective operation, a thread could fall into a race condition in the following scenario:

Simplification of the reader thread's code:

As a possible scenario, the reflective operation didn't have enough time to update x, so the final int x field may or not be correctly read.

2- A thread could fall into a deadlock in the following scenario:

Simplification of the reader thread's code:

I know this is not a specific issue for final fields, but just added as a possible scenario of incorrect read flow of these type of variables. These last two scenarios would just be a consequence of incorrect implementations but wanted to point them out.

Yes, such behavior is allowed.

Turns out that a detailed explanation of this same case is available on the personal page of William Pugh (yet another JMM author): New presentation/description of the semantics of final fields.

A quote from New presentation/description of the semantics of final fields:

In order to determine if a read of a final field is guaranteed to see the initialized value of that field, you must determine that there is no way to construct the partial orders  ᵐᶜ ► and  ᵈᶜ ► without providing the chain w  ʰᵇ ► f  ʰᵇ ► a  ᵐᶜ ► r₁  ᵈᶜ ► r₂ from the write of the field to the read of that field.

Notice that for Thread 2, the deference chain orders r2 = p  ᵈᶜ ► r5 = r4.f, but does not order r4 = q  ᵈᶜ ► r5 = r4.f. This reflects the fact that the compiler is allowed to move any read of a final field of an object o to immediately after the the very first read of the address of o within that thread.

The behavior is permitted by this clause in 17.5:

The "final freeze" happens at the end of the constructor, and from that point on all reads are guaranteed to be accurate. However, if the object is published unsafely, then another thread could (1) read field o, which is uninitialized, and (2) also assume that because o is final, it can never change, and so permanently cache that value without re-reading it.

JMM is not for me and you, it's for people that really know what they are doing, like JVM compiler writers. Are you one of them? Am I one of them? I don't think so, thus stay away from it. There, I've said it.

It's rather interesting that you answered this question yourself, via the correct quote in the JLS:

That's it. It explicitly says what is correct and what can be an expected result. Everything else, is not documented, thus undefined, thus "welcome to unknown territory. have a nice day". So yes, it is possible simply by excluding what is impossible (or guaranteed by the JLS).

Let's go, this is going to be long. We need to look at a certain rule from JLS here:

It is a lot, but should slowly make sense as we go. I admit that I have not done this exercise ever with final fields.

I'll start with Thread 1 and Thread 3. It should be obvious that all these actions in Thread 1 form a happens-before chain, because of the obvious "program order":

which perfectly matches our description above. As such, until now we have:

Now we need to look at that dereferences(r1, r2). We go yet again to the same chapter:

Dereference Chain: If an action a is a read or write of a field or element of an object o by a thread t that did not initialize...

Did Thread 3 initialize q? No (which is good). If you read the second half of this quote (in my understanding at least), we have fulfilled this rule also. Thus:

As such (according to the same initial quote):

Which reads as "no data races are possible". So the only thing that Thread 3 can read is 42, because a read either sees the latest write in happens before order, or any other write.

If you extrapolate this to Thread 1 and Thread 2, you immediately see that freeze action is missing - you can't even start to build such a chain. As such : a data race, as such it can read any other value. But actually it can read either 0 or 42, because java does not allow "out of thin air" values.

499
How does the “final” keyword in Java work? (I can still modify an object.)
3
Serialization/Deserialization of the final transient fields

1025
How can I get the current stack trace in Java?
1124
How to get the current working directory in Java?
606
What is the point of “final class” in Java?
6
Final Fields Semantics in Threads
13
About reference to object before object's constructor is finished
499
How does the “final” keyword in Java work? (I can still modify an object.)
2
Is it safe to use Double Checking Locking based Singleton in Java?
9
What is the exact meaning of final-field-safe context in JLS
44
What exactly does the final keyword guarantee regarding concurrency?