I just downloaded the PyCharm CE (community edition), but am having trouble opening it. When I launch the program, an error pops up saying:

When I click for more details regarding the problem, I get the following:

I have searched online for similar questions, but not been able to figure out what the problem is. My guess is that it might have something to do with dependency versions or something?

I did not have this problem before updating my OS to Big Sur, perhaps this is part of what is causing the problem?

And advice, or links to helpful websites/resources would be greatly appreciated.

Edit: This problem only occurs when I click to start a new project in PyCharm.

I have also tried reinstalling both Python and PyCharm, but this did not work. 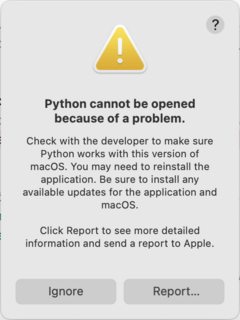 And the original paths for creating a new project:

The short answer: upgrading to Big Sur may have broken your old Python installation, but your project in PyCharm is still trying to use it. The fix (on PyCharm 2020.3):

That should fix things for your current project. To fix it for new projects:

I was using Python 3.5 before the upgrade. My Python Console in PyCharm was showing an error loading a library from

A bit more investigation showed there was no file or directory at that location.

from the Terminal generated the same error: it looks like the upgrade to Big Sur removed one or more libraries the Python 3.5 installation was using.

I closed Terminal. (This step is important because the Python installer will try to update the path information in Terminal, but, unless you want to do some command line magic, Terminal only reads the path when it first starts running.)

Python 3.5 is no longer available for download, so I downloaded Python 3.9.1 and installed it (and ran the command to install the extra certificates -- see the ReadMe file that comes with the installation for details).

Then I launched Terminal again, ran

(NOT the same as the file at /usr/bin/python3) and

and verified that Python 3.9 started and successfully printed its version for both commands. Running "which python3" also confirmed that the installer had updated my path to point to Python 3.9:

At this point, PyCharm was still throwing the "Python cannot be opened" errors.

The next step was to notice that the status bar at the bottom of the open project window still showed "Python 3.5", the broken version.

Either clicking the "Python 3.5" and selecting "Add Interpreter..." or going through "Preferences... -> Project: YourProject -> Python Interpreter" as described above will eventually let you add a new interpreter.

In the "Add Python Interpreter" dialog, I used the dropdown next to "Base Interpreter" to select /usr/local/bin/python3.9 (which was above the entry for python3.5; you may have to scroll up to see it). "OK" was still dimmed until I clicked the folder next to the "Location" entry and made a new folder for the new Python virtual environment. After clicking "OK", the PyCharm errors settled down.

Big Sur is pretty new, so what you can do is reinstall Python and reinstall PyCharm. This can also be compatibility issues. If nothing works you can file a bug.

Before, I met the same problem.

You can try this

Here, modify the Pycharm2019.3 according to your version.

Not the answer you're looking for? Browse other questions tagged python macos pycharm or ask your own question.

6764
What are metaclasses in Python?
3306
How to copy files?
5179
How can I safely create a nested directory?
7279
Does Python have a ternary conditional operator?
3532
How do I get the current time?
3251
How do I concatenate two lists in Python?
2863
Manually raising (throwing) an exception in Python
3590
Does Python have a string 'contains' substring method?
10
python3.5 error 'dyld library not loaded: CoreFoundation' after macOS Big Sur update
16
dyld: Library not loaded: /System/Library/Frameworks/CoreFoundation.framework/Versions/A/CoreFoundation