Eclipse source out of sync with file system

I inherited a java project and don't have much experience with Eclipse. In the package explorer I can see the outline of the project with all the classes but when I try to edit any of them it says the source code is not found. When I look the source code is where it seems it is supposed to be. I am assuming that in pulling the code out of source control the path must have changed from the original. Is there an easy way to tell the IDE to just connect a code file to a class?

What's really weird is that 'some' of the files in the very same directory are found while others are not. Can't say I think very highly of this IDE so far.

Right click on the project in the Package Explorer view and select Refresh.

You can have Eclipse do that automatically for you.

Select General -> Workspace and from there make sure the first and second option are checked: 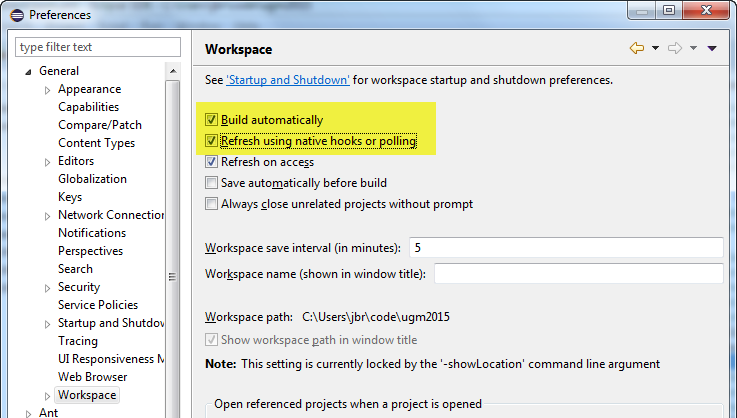 This is very useful especially if you use Dropbox or something similar (wuala etc) :)

just refreshing isnt always the answer. I had this source issue happen when I had imported two projects with the same context for review and Eclipse made me disambiguate them, forcing a change to the web context of the second. The source for one was linking to the other context's source folder. eg

in .settings/org.eclipse.wst.common.component (within folder A1) the wb-module element referred to the other context /A[later] and was using its source code, not that for /A.

I solved this by updating all references in the org.eclipse.wst.common.component file in each project to suit their correct project

** the suffix I chose upon import, it has no particular significance

By default, 'F5' on a highlighted resource will also refresh it.

You can right click on the project name and click refresh. And just to be sure, you can select the package name and right click 'Refresh' too.

Click on the project, then press F5 to refresh the file. It should be fine.

If using maven or other builder be sure that you disable the plug ins some plug ins, specially the ones meant to generate/change code will never let you be fully on sync

178
How to create a project from existing source in Eclipse and then find it?
278
Avoiding "resource is out of sync with the filesystem"
1148
Which @NotNull Java annotation should I use?
60
Is there an equivalent of "Add existing file" (to project) in Eclipse?
101
What does the > (greater than bracket) mean beside file names in Eclipse's Package Explorer?
2
Eclipse and Java - source not found
0
Placing existing source files into eclipse
615
Update Eclipse with Android development tools v. 23
0
Eclipse import a plugin as source project but it's not include src folder