I ran 10 copy of the same code (changing only some parameters) simultaneously in 10 different folder (each program working in single core).
In each program I have a for loop (the number of iterations, NumSamples, can be 50000, 500000 or 5000000 (the number of iteration depend on the specific time of execution of a single iteration; A greater number of iteration are performed in quicker cases )). Inside each iteration I compute a certain quantity (a double variable) and then save it on file with (inside the for block):
fprintf(fp_TreeEv, "%f\n", TreeEv);
where TreeEv is the name of the variable computed at each cycle.
To be sure that the code save the variable right after the fprintf command I set the buffer to 0 after the file opening, with:

TreeEv=fopen("data.txt", "a");
setbuf(TreeEv, NULL);
The program ends without error. Also I know that all the NumSamples iterations have been done during the execution (I print a variable initialized with 0 at the beginning of the for loop and that increase by one at each cycle).
When I open the txt file, at the ending of code execution I see that inside the file there are less row (data) than expected (NumSamples), for example 4996187 instead of 5000000 (I've also checked that csv file miss the same amount of data with tr -d -c , < filename.csv | wc -c, as suggested by Barmar)
What could be the source of the problem?

I copy below the for loop of my code(inv_trasf is just a function that generate random numbers):\

Could the problem stay in the ssd that, in a given moment, failed to follow the codes and wasn't able to call back data (for the presence of Null buffer)?
Only codes with greater execution time (on the single cycle iteration) save correctly all the expected data. From man setbuf "If the argument buf is NULL, only the mode is affected; a new buffer will be allocated on the next read or write operation."

[EDIT]
I noticed that inside one of the txt file "corrupted" there is one invalid value: 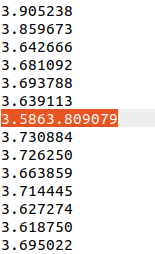 When you set 'unbuffered' mode on a FILE, each character might1 be written individually to the underlying device/file. In that case, if mulitple processes are appending to the same file, if both try to write a number at the same time, they might get their digits interleaved, as you show with your "corrupted" value. So setting _IONBF mode on a file is generally not what you want.

1It's actually not possible to completely unbuffer a file -- there will still be disk buffers involved in the OS, and may still be a (small) stdio buffer to deal with some corner cases. But in general, every character might be individually writte to a file.

Not the answer you're looking for? Browse other questions tagged c file for-loop printf buffer or ask your own question.

1049
How to get file creation & modification date/times in Python?
0
Manage data inside a buffer
6
Print to a buffer or file reusing code
1
C writing to file from dll, with file opened in application
2
fprintf not writing to file, despite fclose()
1
Modifying content of a text file in C
0
c code: fprintf from multiples codes to the same file