I found the following algorithm provides a very good statistical distribution. Each input bit affects each output bit with about 50% probability. There are no collisions (each input results in a different output). The algorithm is fast except if the CPU doesn't have a built-in integer multiplication unit. C code, assuming int is 32 bit (for Java, replace >> with >>> and remove unsigned):

The magic number was calculated using a special multi-threaded test program that ran for many hours, which calculates the avalanche effect (the number of output bits that change if a single input bit is changed; should be nearly 16 on average), independence of output bit changes (output bits should not depend on each other), and the probability of a change in each output bit if any input bit is changed. The calculated values are better than the 32-bit finalizer used by MurmurHash, and nearly as good (not quite) as when using AES. A slight advantage is that the same constant is used twice (it did make it slightly faster the last time I tested, not sure if it's still the case).

You can reverse the process (get the input value from the hash) if you replace the 0x45d9f3b with 0x119de1f3 (the multiplicative inverse):

For 64-bit numbers, I suggest to use the following, even thought it might not be the fastest. This one is based on splitmix64, which seems to be based on the blog article Better Bit Mixing (mix 13).

For Java, use long, add L to the constant, replace >> with >>> and remove unsigned. In this case, reversing is more complicated:

Update: You may also want to look at the Hash Function Prospector project, where other (possibly better) constants are listed.

In general, you should pick a multiplier that is in the order of your hash size (2^32 in the example) and has no common factors with it. This way the hash function covers all your hash space uniformly.

Edit: The biggest disadvantage of this hash function is that it preserves divisibility, so if your integers are all divisible by 2 or by 4 (which is not uncommon), their hashes will be too. This is a problem in hash tables - you can end up with only 1/2 or 1/4 of the buckets being used.

Depends on how your data is distributed. For a simple counter, the simplest function

will be good (I suspect optimal, but I can't prove it).

Fast and good hash functions can be composed from fast permutations with lesser qualities, like

To yield a hashing function with superior qualities, like demonstrated with PCG for random number generation.

This is in fact also the recipe rrxmrrxmsx_0 and murmur hash are using, knowingly or unknowingly.

to be good enough.

A good hash function should

Let's first look at the identity function. It satisfies 1. but not 2. : 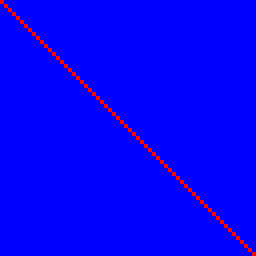 Input bit n determines output bit n with a correlation of 100% (red) and no others, they are therefore blue, giving a perfect red line across.

A xorshift(n,32) is not much better, yielding one and half a line. Still satisfying 1., because it is invertible with a second application. 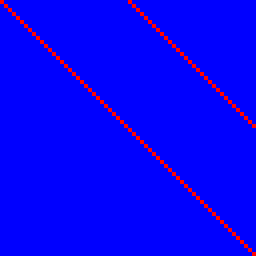 A multiplication with an unsigned integer ("Knuth's multiplicative method") is much better, cascading more strongly and flipping more output bits with a probability of 0.5, which is what you want, in green. It satisfies 1. as for each uneven integer there is a multiplicative inverse. 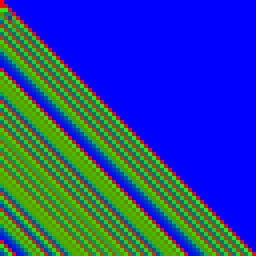 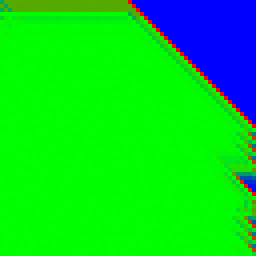 A second application of multiplication and xorshift will yield the following: 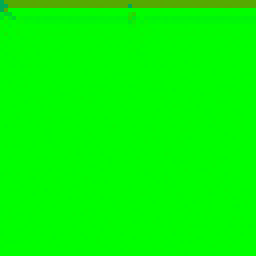 Or you can use Galois field multiplications like GHash, they have become reasonably fast on modern CPUs and have superior qualities in one step.

This page lists some simple hash functions that tend to decently in general, but any simple hash has pathological cases where it doesn't work well.

I have been using splitmix64 (pointed in Thomas Mueller's answer) ever since I found this thread. However, I recently stumbled upon Pelle Evensen's rrxmrrxmsx_0, which yielded tremendously better statistical distribution than the original MurmurHash3 finalizer and its successors (splitmix64 and other mixes). Here is the code snippet in C:

Pelle also provides an in-depth analysis of the 64-bit mixer used in the final step of MurmurHash3 and the more recent variants.

There's a nice overview over some hash algorithms at Eternally Confuzzled. I'd recommend Bob Jenkins' one-at-a-time hash which quickly reaches avalanche and therefore can be used for efficient hash table lookup.

For random hash values, some engineers said golden ratio prime number(2654435761) is a bad choice, with my testing results, I found that it's not true; instead, 2654435761 distributes the hash values pretty good.

The hash table size must be a power of two.

I have written a test program to evaluate many hash functions for integers, the results show that GRPrimeNumber is a pretty good choice.

With my testing results, I found that Golden Ratio Prime Number always has the fewer empty buckets or zero empty bucket and the shortest collision chain length.

Some hash functions for integers are claimed to be good, but the testing results show that when the total_data_entry / total_bucket_number = 3, the longest chain length is bigger than 10(max collision number > 10), and many buckets are not mapped(empty buckets), which is very bad, compared with the result of zero empty bucket and longest chain length 3 by Golden Ratio Prime Number Hashing.

BTW, with my testing results, I found one version of shifting-xor hash functions is pretty good(It's shared by mikera).

There are better data structures than hash tables for unknown data sizes (I'm assuming you're doing the hashing for a hash table here ). I would personally use a hash table when I Know I have a "finite" number of elements that are needing stored in a limited amount of memory. I would try and do a quick statistical analysis on my data, see how it is distributed etc before I start thinking about my hash function.

The answer depends on a lot of things like: