Getting the true z value from the depth buffer

Sampling from a depth buffer in a shader returns values between 0 and 1, as expected. Given the near- and far- clip planes of the camera, how do I calculate the true z value at this point, i.e. the distance from the camera?

[edit] So here's the explanation (with 2 mistakes, see Christian's comment below) : 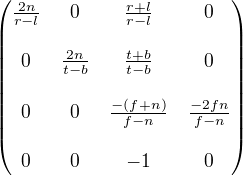 OpenGl next does the perspective division: it divides this vector by its w component. This operation is not done in shaders (except special cases like shadowmapping) but in hardware; you can't control it. w = -z, so the Z value becomes -A/z -B.

We are now in Normalized Device Coordinates. The Z value is between 0 and 1. For some stupid reason, OpenGL requires that it should be moved to the [-1,1] range (just like x and y). A scaling and offset is applied.

This final value is then stored in the buffer.

The above code does the exact opposite :

The opposite function is :

I know this is an old, old question, but I've found myself back here more than once on various occasions, so I thought I'd share my code that does the forward and reverse conversions.

This is based on @Calvin1602's answer. These work in GLSL or plain old C code.

Not the answer you're looking for? Browse other questions tagged opengl graphics shader or ask your own question.

5
How does WebGL set values in the depth buffer?
4
True depth values using OpenGL readPixels
4
Linearize depth
4
Render depth to texture
2
OpenGL restore z from depth
1
opengl using depth buffer for shadows- any reason not to just render z to tex rather than use depth buffer?
2
Unpacking RGBA depth value in three.js
0
OpenGL ES Depth Buffer rendering (iOS simulator VS real device)
0
Metal + ARKit — Get z distance to current fragment in fragment shader
0
Should all vectors be transformed into perspective space when working with them in the fragment shader?
See more linked questions

4
True depth values using OpenGL readPixels
283
Once upon a time, when > was faster than < … Wait, what?
1
calculation of depth buffer values
0
OpenGL: Specify what value gets wrote to the depth buffer?
1
opengl using depth buffer for shadows- any reason not to just render z to tex rather than use depth buffer?
0
Getting depth from Float texture in post process
11
Getting World Position from Depth Buffer Value
8
World-space position from logarithmic depth buffer
3
Getting world coordinates from OpenGL depth buffer