VSCode: The Python path in your debug configuration is invalid

Very new to Python and VSCode (and stackoverflow). I've been using both for about 3 months now just fine, up until recently that is.

When trying to run any basic Python program in the debugger, the popup The Python path in your debug configuration is invalid. Source: Python(Extension) appears and the debugger won't run. I go to my launch.json file and sure enough, I have the path to where Python is set up.

Messing with settings.json doesn't help anything either because I do have the path to Python set up, but the debugger still won't run. I am at a loss what to do here. I have never gone into my .json files in the past before, nor have I ever had to configure my Python path after installing VSCode for the first time.

I was facing the same problem. Here's how I fixed it without having to uninstall:

Look at this image for reference: 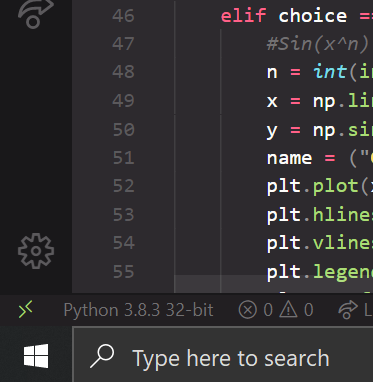 Click on the "Python 3.8.3 32-bit" down there in the corner (the version maybe different for you) and select your debugger or specify the location if it's not already there.

Vscode is not able to find the python path or its not yet set.

Open command palette(ctrl+shift+P) and type python and look for "Python:Select Interpreter". You will be asked to enter the path of python where it is installed.

Incase you are using virtual environment and in most of the case its true. Look for the path .venv/Script/python else select the python path where you have installed in your local machine.

Turns out I had to downgrade the version of my Python extension from Version 2021.3 to 2021.2, now VSCode can finally find the Python path.

Findings to get there

My Case: I couldn't find the underlying reason, but could find a workaround as follows.

This solves the problem and the code runs normally.

In short, my workaround is to use VSCode as only an editor, and run codes via terminals (command prompt, power shell etc.).

I had a similar problem in VScode today. I was getting the following error message every time I tried to run a script.

The Python path in your debug configuration is invalid.

The problem resolved itself when I opened a folder in the 'Explorer' tab on the left hand side of the screen. Not sure why this worked or if it was actually the problem ... maybe it will help someone.

Not the answer you're looking for? Browse other questions tagged python python-3.x or ask your own question.

0
Using vscode debugger on python module with active virtualenv, "the python path in your configuration file is invalid" in launch.json

1572
How do I import a module given the full path?
1633
What's the canonical way to check for type in Python?
1493
How can I flush the output of the print function?
3546
How do I get the current time?
1451
How do I get the filename without the extension from a path in Python?
1401
Referring to the null object in Python
1537
What is the Python 3 equivalent of "python -m SimpleHTTPServer"
1133
Extract file name from path, no matter what the os/path format
195
VSCode -- how to set working directory for debugging a Python program