When executing a commit of a set of files within the EGit eclipse plugin, I always have to add new files manually in the commit dialog 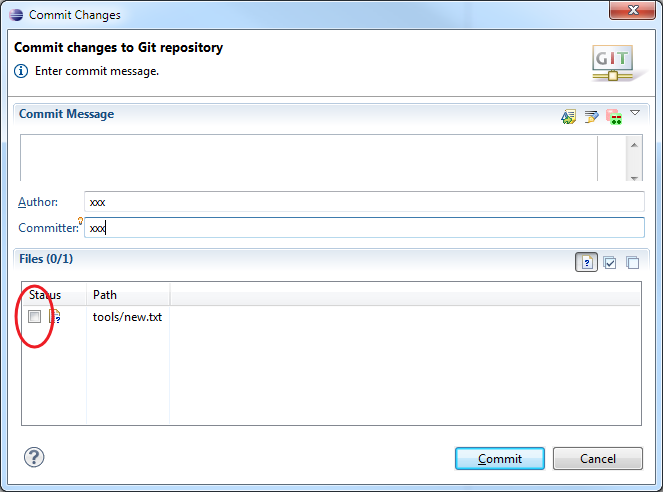 Is there a way to configure the plugin in a way, that adding new files automatically is the default setting?

Such an option exists now, it can be enabled in the preferences in Team → Git → Commit Dialog by checking Include selected untracked files: 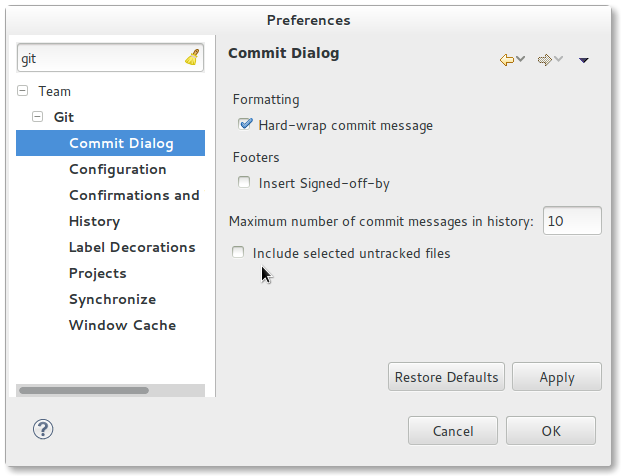 Note that only untracked files that are contained in the selected files/folders/projects are included – so it depends on where you opened the context menu from.

Right now, there doesn't seem to be any option to have all new files added automatically.
(and this wouldn't be possible as well with Git)

Even on the commit stage, Git proposes only git commit -a -m "..." in order to automatically stage files that have been modified and deleted, but new files you have not told git about are not affected.

In other word, this would be a new feature in EGit which wouldn't have any direct correspondence in Git.

Not the answer you're looking for? Browse other questions tagged eclipse git egit or ask your own question.

6885
How to remove local (untracked) files from the current Git working tree
4309
How can I add an empty directory to a Git repository?
4554
How can I reset or revert a file to a specific revision?
9047
How do I undo 'git add' before commit?
2933
Difference between “git add -A” and “git add .”
2826
Find and restore a deleted file in a Git repository
7258
How do I force “git pull” to overwrite local files?
5475
How to make Git “forget” about a file that was tracked but is now in .gitignore?
5040
Move the most recent commit(s) to a new branch with Git
3951
How to change the URI (URL) for a remote Git repository?