The --no-ff option is useful when you want to have a clear notion of your feature branch. So even if in the meantime no commits were made, FF is possible - you still want sometimes to have each commit in the mainline correspond to one feature. So you treat a feature branch with a bunch of commits as a single unit, and merge them as a single unit. It is clear from your history when you do feature branch merging with --no-ff.

If you do not care about such thing - you could probably get away with FF whenever it is possible. Thus you will have more svn-like feeling of workflow.

For example, the author of this article thinks that --no-ff option should be default and his reasoning is close to that I outlined above:

Consider the situation where a series of minor commits on the "feature" branch collectively make up one new feature: If you just do "git merge feature_branch" without --no-ff, "it is impossible to see from the Git history which of the commit objects together have implemented a feature—you would have to manually read all the log messages. Reverting a whole feature (i.e. a group of commits), is a true headache [if --no-ff is not used], whereas it is easily done if the --no-ff flag was used [because it's just one commit]." 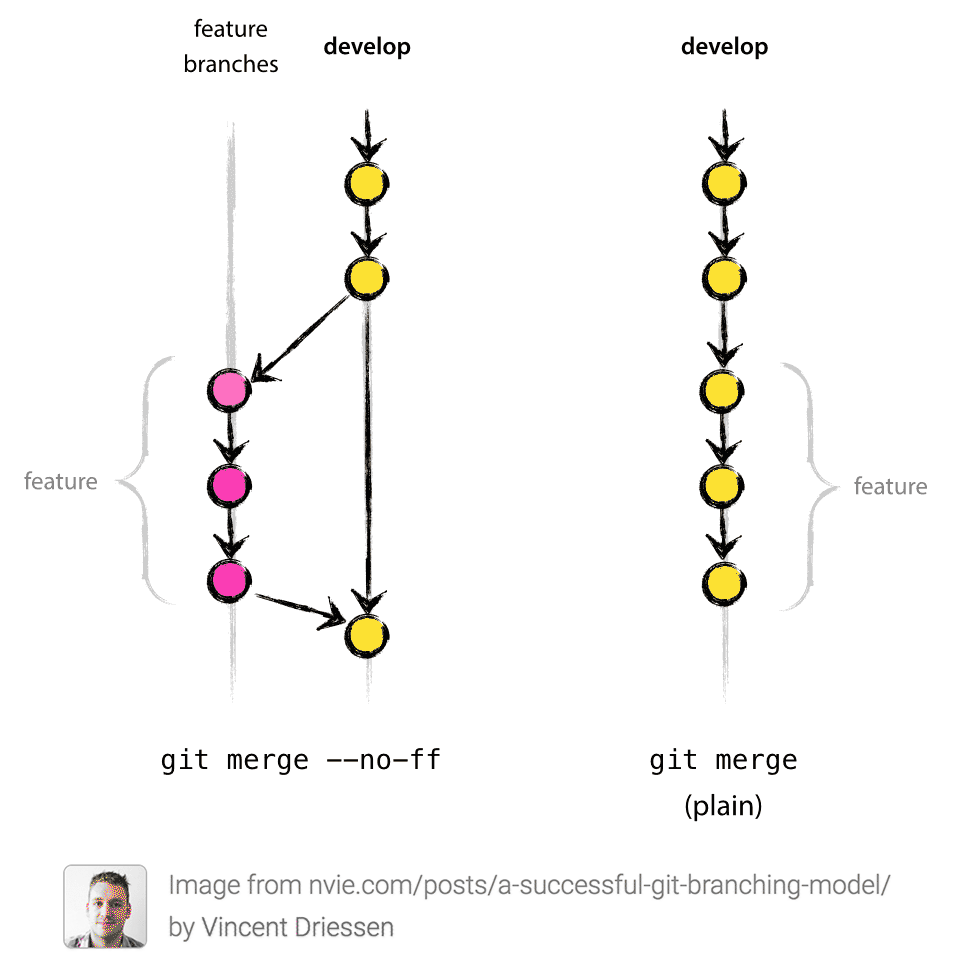 I can give an example commonly seen in project.

(*) Note that here if the newFeature branch is re-used, instead of creating a new branch, git will have to do a --no-ff merge anyway. This means fast forward merge is not always eligible.

When we work on development environment and merge our code to staging/production branch then Git no fast forward can be a better option. Usually when we work in development branch for a single feature we tend to have multiple commits. Tracking changes with multiple commits can be inconvenient later on. If we merge with staging/production branch using Git no fast forward then it will have only 1 commit. Now anytime we want to revert the feature, just revert that commit. Life is easy.

It is possible also that one may want to have personalized feature branches where code is just placed at the end of day. That permits to track development in finer detail.

I would not want to pollute master development with non-working code, thus doing --no-ff may just be what one is looking for.

As a side note, it may not be necessary to commit working code on a personalized branch, since history can be rewritten git rebase -i and forced on the server as long as nobody else is working on that same branch.

1047
What is the difference between `git merge` and `git merge --no-ff`?
647
Why does git perform fast-forward merges by default?
19
How do I make Jenkins see a Git merge commit as a change?
2
Git: revert merge error
1
Avoid adding empty merges
0
Does Github.com have to create a merge commit when you merge from a fork ?
0
Difference between --no-ff and --ff in order to have cleaner history log in Git?
1
how do you separate the lines of each branch on git?
0
git pull origin Develop into roles after git pull origin roles into Develop doesn't create a new commit with message “merged Develop in to roles”